In a video a native speaker of English said:

I gotta show you something... it is important. I need to show you it.

I am not a native speaker and this last sentence sounds extremely weird to me. I asked two English native speakers (both British), one of whom said it is okay and the other that it is wrong.

Is this grammatical? If not, is it about to become grammatical due to frequent use?

An AE-corpus ngrams for show you it,show it you,show it to you vs. a BE-corpus ngrams for the same phrases illustrates, as Peter Shor said in comments, that show it you is rarely used in AE. Its use peaked in the early 1800's. The form is becoming rare in BE; its use peaked in the early 1900's. Pages 101 and 102 of a reference mentioned by tchrist (American and British English Preferences by Salama and Ghali), shown in part below, list several verbs after which some BE speakers elide to but most AE speakers do not. 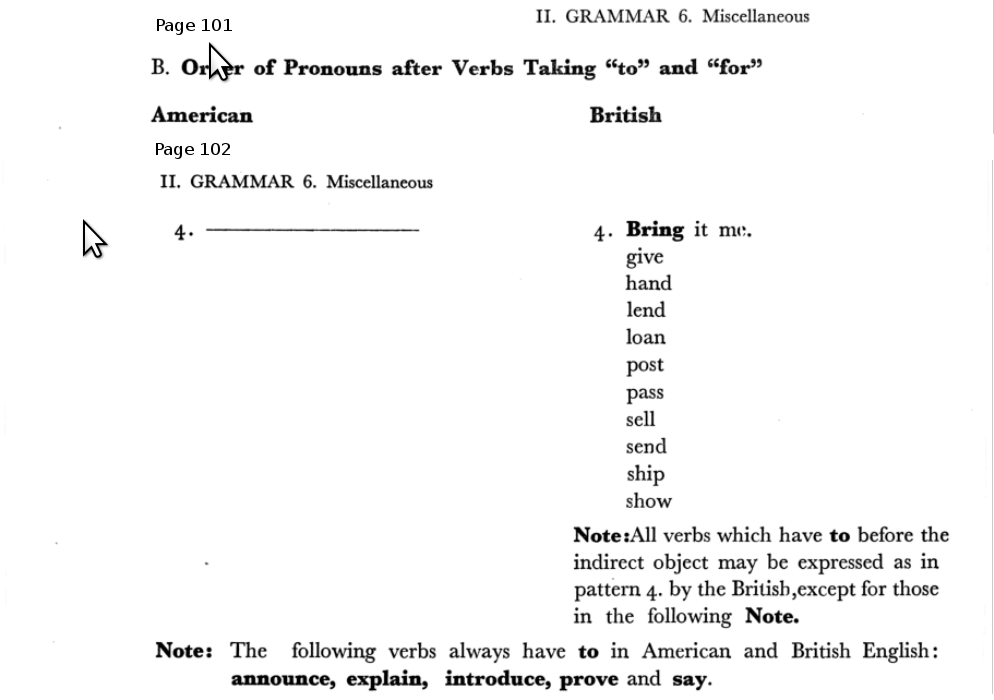 It depends on the dialect.

In most dialects, the following is correct:

... show you the important thing.

But dialects differ when we replace the indirect object ("important thing") with "it". Some change the word order:

Others keep the word order the same:

Not the answer you're looking for? Browse other questions tagged word-order or ask your own question.

10
Is it incorrect to say, 'Give me it'?
-2
sentence pattern clarification
2
Grammar Rules regarding the pronoun 'it'