When I logged on to LinkedIn the other day, I was prompted to add information about which language I speak and at which level. I consider myself to be pretty fluent both in written and spoken English, although I probably have a noticable Swedish accent when I speak. But how do I know if I have "full professional proficiency" or "native or bilingual proficiency"? 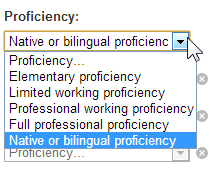 Accent isn't an issue unless it prevents your listeners from understanding your spoken English. If that's the case, then you can't claim spoken fluency.

"Bilingual" can have both a restricted and an unrestricted meaning. My 16-year-old son is trilingual, but Mandarin Chinese is his best and "native" language; Southern Min (Taiwanese from Fujian Province) is his "mother tongue" because he grew up speaking that every day with his grandmother, uncles, aunts, friends, and mother, but he doesn't use it as much as he uses Mandarin (all school classes are taught in Mandarin); and English is what he uses with me and has since he was born, but it's his third language. For the most part, he sounds like a native speaker of American English, but because he's never lived there, he knows little or nothing about American culture, and I haven't gone out of my way to teach him. He watches and listens to American movies and to American YouTube videos (comedians etc.) and understands some of the jokes, but he's not bi-cultural and not totally bilingual because he doesn't have native fluency: He often has to translate words and ideas from Chinese and I often have to ask Google Translate to express some ideas and English words in Chinese when we talk.

If you can think in English as well as you can think in Swedish, and if you have a deep understanding of the culture as well as the written and spoken language of an Anglophone country -- one that would allow you to be, say, a simultaneous interpreter at the United Nations -- then you can probably claim "native or bilingual proficiency". You'd be able to simultaneously translate current slang and topical references and jokes from English into Swedish or Swedish into English. I knew a young Japanese-American woman about 30 years ago who was bi-cultural and bilingual in Japanese and American English. When she spoke English, she acted like an American woman, but when she spoke Japanese, she changed personalities and acted like a Japanese woman. Quite different.

If you can easily discuss the major and minor topics in your field of work in English in minute detail, just as you would be able to in Swedish (I'm assuming that you can do that in your native language), then you can claim "full professional proficiency". You probably wouldn't need to use an English dictionary any more often than you'd need to use a Swedish dictionary for arcane technical terms in or related to your field. You wouldn't necessarily be able to translate current slang and topical references and jokes from English into Swedish or Swedish into English.

I'm sure that I'm missing something here, but this is my impression of what those terms mean.

2 - Limited Working Proficiency
Able to satisfy routine social demands and limited work requirements
Able to read simple prose, in a form equivalent to typescript or printing, on subjects within a familiar context.

3 - Minimum Professional Proficiency
Able to speak the language with sufficient structural accuracy and vocabulary to participate effectively in most formal and informal conversations on practical, social, and professional topics.
Able to read standard newspaper items addressed to the general reader, routine correspondence, reports, and technical materials in the individual's special field.

Full professional proficiency (to me) would indicate that you are not a native speaker of this language but have been trained to speak and are fluent in the language with a specific knowledge of the terms and language used within a specific business or industry.

In practical and conventional terms, anything beyond Limited Working Proficiency requires fluency in all the categories Reading, Writing & Speaking.

In order of proficiency, 'Native' ranks on par with or above 'Professional'. I presume you are not a native speaker.

Depending on what you think is the extent to which others can understand when you speak, you may state either Working or Professional.

This is a good question for ESL, I suppose.

Linkedin is a website intended for professional business networking. So that’s no wonder they use this phrase “professional proficiency”. To me, it simply focuses on the ability to speak English fluently while in your workplace, including the knowledge of all that professional vocabulary. Definitely it much depends on your profession and education. There’s using English as a sales person in a small store, while there’s using it as a visiting professor in an American college. And they’re a world of difference.

Although I reckon it doesn’t necessarily imply the ability to fluently communicate with native speakers outside your work or in very informal situations on topics ranging from fashion to politics while passing for a native speaker. No doubt accent or word choice is the best give-away, while most people still think that they don’t determine fluency. In reality fluency that is, proficiency) might range very wide from being able to easily get by in a local bar to giving a lecture in English. But unless you’re born or raised in an English-speaking country you can’t call yourself a bilingual, in my humble opinion.

hey heres a link that would help :)

A bilingual as defined by many scholars is the one who has got an access to two languages. He can speaks, understands and responds orally to the second language environmentally, culturally, and to some extent linguistically unless otherwise he has trained himself to formally pracice his bilingualism.

40
Meaning of “native speaker of English”
1
Word between “proficient” and “mastery”?
1
I am trying to decide if I can consider myself a native English speaker