Is there a difference between “disc” and “disk” for naming digital storage media?

I thought that a disc was a disc, and it is sometimes spelled disk. I now have got an indication that those two are not the same thing.

In this answer on Graphic Design, I wrote floppy disc in the answer.

I got a comment from someone that it should be floppy disk. He stated that

Disk is a magnetic storage media, while disc is an optical one.

Yes, according to Wikipedia the dis-k version of the word has been used to refer to magnetic storage media since the 1950s when IBM (a US company) pioneered the first hard drive. Subsequently the advent of optical media from companies such as Philips (Who are Dutch and therefore used the European spelling) and Sony meant that the form dis-c was chosen.

Etymologically speaking both words are synonyms, with the only difference being that disc is more common in British English, whilst disk is more popular in American English.

Rhodri (see below) also notes that the persistence of the word disk (even in European usage) for a magnetic storage medium is in deference to its American roots at IBM.

I was on the ANSI committee that defined the 5 1/4 inch floppy specification (ANSI X3-B8) back around 1980. Even then, among all the existing manufacturers, there was no consensus about disk versus disc versus diskette.

So both "disk" and "disc" are correct.

As an aside, that was a pretty rockin' crew. That ANSI committee met three times a year, and always in some cool place, like Lake Tahoe, or New Orleans during Mardi Gras, so we could meet hard all day and party all night, entertaining each other on company expense accounts.

I believe that disk is American English whilst disc is English English. In the era of personal computers with removable disks, the spelling mostly came from the US computer industry and has taken hold in other parts of the Anglosphere.

Currently, most optical discs are popularly referred to as CDs, DVDs or Blu-Rays, so perhaps the distinction is moot.

No one has used a floppy-disk for decades, the 8-inch ones were certainly floppy, the 5.25 inch ones much less so and arguably didn't deserve the name. You might have been referring to a 3.5 inch diskette.

Athletes still throw a discus I think. Whether your car is equipped with disc-brakes or disk-brakes probably depends on where you purchased it.

Well, he is right in the manner that this is how the different spellings have come to be used.

I worked for many years at U.S. technology magazines; it may be of interest to readers to see the word-list entries for disc and disk that governed our house style for those words at two magazines that shared the same word list. Here they are, from an era before DVDs appeared on the scene:

disc use for CD-ROMs, audio CDs, and laser discs

As you can see, the split in spelling that we followed was based not on a general U.S. preference for disk over disc, but on two separable categories of components/media: magnetic/electronic and optical/electronic. I suspect that the split arose because our magazines had gravitated toward hard disk and floppy disk in the early days of personal computers as a U.S. English preference, but nevertheless adopted the conventional spelling compact disc for CDs when they emerged.

Note that this is essentially anecdotal information: I don't know how many other U.S. publishers adopted the same distinction, but my impression is that our house style was not unusual in its treatment of these words.

As for why CDs were designated as compact discs instead of compact disks, even in the United States, I believe that the impetus came from vinyl records, which were usually styled discs, rather than disks, when the term was applied to them at all. That spelling follows in the tradition of the words discophile (since 1940, according to Merriam-Webster's Eleventh Collegiate Dictionary) discotheque (anglicized since 1954, according to MW), disco (the short form of discotheque, since 1964), and disco (the verb associated with disco music, since 1979).

Disk is American spelling while disc in British spelling. No difference otherwise.

Since no answer has an image to illustrate the difference, I'll take this chance and hopefully having some reps: 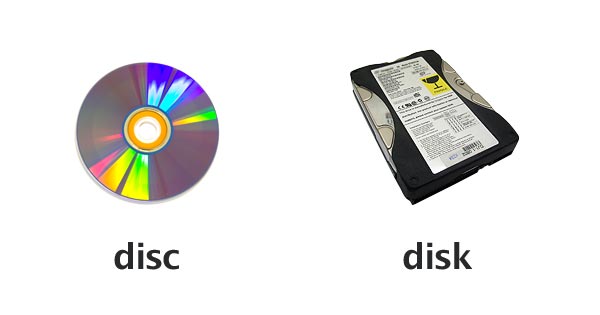 Disk is short for diskette, a disc carried in a housing.

Not the answer you're looking for? Browse other questions tagged word-choice meaning terminology technical or ask your own question.

3
What is the difference between Disk and Disc?

70
Substitute X for Y
3
Alternative word for “media” for disks, USB storage etc
0
Difference in naming between consulting and consultants
3
Is “read roughly” a natural response?
6
Difference between promptness and promptitude
5
The difference between “it” and “he/she”
4
Difference between “Registration” and “Enrollment”
4
What is the blurring of pixels for fidelity called?
8
What’s so floppy about floppy disks?