The OED has made a public appeal for help in tracing the history of some English words, including:

The first evidence for the metaphorical blue-arsed fly in the OED entry comes from a 1970 quote attributed to the Duke of Edinburgh:

1970 Times 22 Apr. 7/3 The Duke of Edinburgh‥asked a photographer if he was getting enough pictures… ‘You have been running around like a blue-arsed fly.’

The r-less blue-assed fly, however, is attested from at least 1932. Why such a discrepancy? Since our original OED entry was published in 2005, we’ve discovered an earlier example of blue-arsed fly in a dictionary of slang from 1949, but we suspect there may be evidence out there that is earlier still. Can you help us find it? Real-life examples dating from before 1970 and dictionary examples from before 1949 would both be welcome.

For reference, here are the entries as currently published in OED Online: 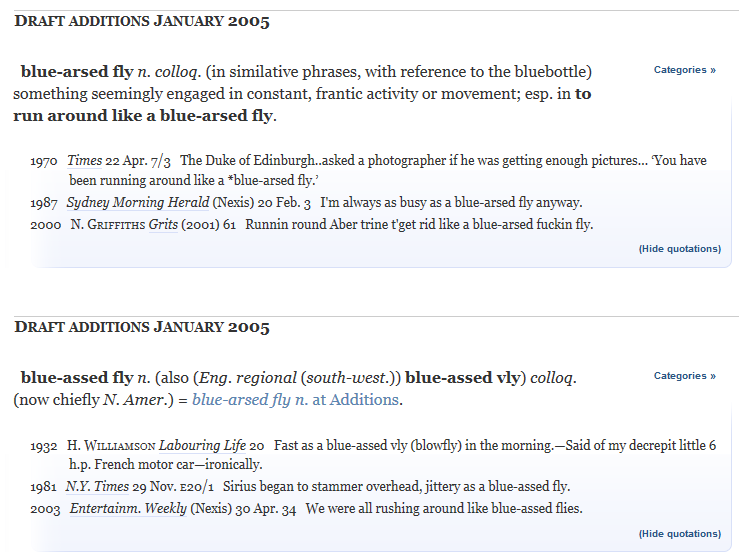 Searching Google Books, I found nothing earlier than Claude Cumberlege's Master Mariner (1936), but you also asked for real-life examples dating from before 1970 and there's plenty of those. (I found some dictionary examples but they were in the 1950s.) Note that all of these are only shown in snippet view at Google Books and they sometimes get the dates wrong.

Interestingly, many are from naval or military sources, and many are of the form "rushing/dashing/darting around like a blue-arsed fly in a [something]", especially for the earlier ones.

Not counting all the preparations and the getting up from below of a new sail, I don't suppose we were much more than half an hour at the job, thanks to a great extent to the cheerfulness and activity of Mani, our pet murderer, who was here, there and everywhere, working like a trojan and dancing about like a blue-arsed fly in a strange roundhouse.

The golden carpet - Somerset Struben De Chair - 1943 - ("The story of the British campaign to capture Baghdad and Palmyra in 1941"):

The amber was still viscous and he sometimes emerged to buzz about, as someone described him, "like a blue-arsed fly in a tripe shop."

Europe without Baedeker: sketches among the ruins of Italy, Greece, & England - Edmund Wilson - 1947:

They were buzzin' about after I talked to 'em like a lot of blue-arsed flies.

'I'm always coming up against the same thing myself. Cheer up, though. Things might have been worse: at first I thought we were going to be up against one of these little field marshal fellows, but the midden's only a full general. What these chaps get paid for beats me: buggering about all the time like blue-arsed flies in a bakery and never doing a stroke of honest work.'

Mack who, when I last saw him grinning at me over a pint of beer, said, 'You together buzzin' around agen, George, like some blue-arsed fly ... !

'I'm going to start before all the ears are on the ground. There's hardly any left now', I announced breathlessly. 'You rush around like a blue-arsed fly in the window pane and get nowheres fast', he said.

"Personally I prefer a job like this to the type of campaign that goes off at half-cock with everyone darting about like blue-arsed flies and beating the air for inspiration.

At noon the sun broke through the mist. Flies were moving from corners in the concrete roof of the Saschenfeste, where they had held torpid during the winter — big, slow-buzzing insects. ' Blue-arsed flies ', the men called them, obviously bred upon the 1917 battlefield.

After that you can stroll up to the Mess, while everybody down below is running about like blue-arsed flies making cocoa and what-all, and you can start golloping down pink gins and champagne, etc., with a clear conscience.

Brock and Jack yarned away like old cobbers, and the store- man put on a little act that was supposed to show that he was a stern, tough man, and a tiger for efficiency. "System's the keynote, here, Jack. No rushing about like a blue-arsed fly, a proper way to handle everything that comes up."

The director's wife: and other stories - Brian Glanville - 1963:

On the field, he was like I expected him to be; all speed and no intelligence. He can be a lovely mover at times, I'll give him that, but once he'd started off, he'd got no more idea where he was going than a blue arsed fly; half the time ...

Well, I felt a bit sorry for Bill, then; he was rushing all over the dressing-room like a blue-arsed fly.

And where was they? The old posh wallahs. The jolly old prang brigade. Them up there. Not a bleeder in sight. Not a blue-arsed fly.'

That's torn it. The Guv takes off like a blue-arsed fly. "Where's my dressing gown? Where's my so-and-so blue-pencil dressing gown?" bawls the Guv, very liberal with his b's and f s as per.

Once he had fallen out, he said, with the local policeman - an officious bastard always poking his nose in and hopping around like a blue-arsed fly.

'Taff, I'm popping down to the mess for five minutes. Now look, if anybody rings for me say I'm in the crapper and ring the mess and I'll be back like a blue-arsed fly.

For about six weeks I painted solidly, rushing around like a blue-arsed fly between my studio and the furnace, twenty miles away, where my enamel paintings were fired ...

When she'd gone, and I'd stood crossing my fingers that they didn't meet on the stairs, I started buzzing round the flat like a blue-arsed fly, pulling Jane's things out of the wardrobe, trying to remember where they'd been lying, putting her bottles ...

He snorted — laughed. 'Hah. Fight, sure, sure, sure. Sure we can fight, but what does it cure? Sure, Solomon O. Berger, you can run around like a blue-arsed fly fighting it. You can put up a magnificently heroic show fighting it, Solomon, sure.

"But there you are — a writer, buzzing about like a blue-arsed fly trying to pick up a few guineas here or there.

... the smoke puthering out from the grate when the wind blew down the chimneys, the old man golloping his food, Gran scratting about like a blue-arsed fly, the kids yawping and grilling in the jitties, the sister who takes tut over nothing, people ...

Not the answer you're looking for? Browse other questions tagged etymology phrases expressions oed-appeals or ask your own question.