What is a communication breakdown caused by two cultures/societies trying to adapt one another's mores called?

For example, in Japan I often encounter this paradox when it comes to addressing friends. In Japan, it's generally rude to call someone by their first name unless you're really close friends. You'd generally refer to them by their last name followed by -san. Most of the young people that I meet in Japan have a good knowledge of American culture, and understand that for us calling someone Mr. (last name) means that you're not friends at all, and are interacting on a very formal level. So many people whom I've met have said "we're friends, please call me (Tetsuya, Katsuhiro, Yoshida, etc.)", even though we haven't known each other nearly long enough to be on a first name basis (by Japanese standards).

edit: To clarify, I'm specifically looking for a term that summarizes the communication breakdown caused by two cultures trying to, out of politeness or respect, accomodate each other's cultures? 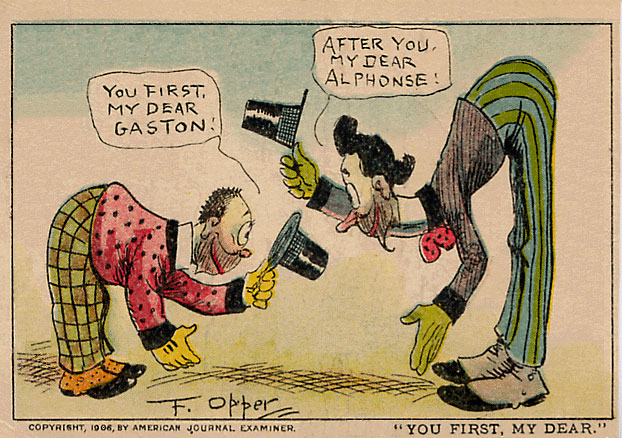 You could dub such a breakdown as symptomatic of the Alphonse-Gaston syndrome:

a pair of persons exhibiting an excessive usu. exaggerated politeness or deference to each other esp. about not taking precedence

The strip faded from public view shortly after Opper's death in 1937, but the catchphrase "After you, my dear Alphonse" lived on. It continues to the present day, spoken in situations when a person receives a dare to do something difficult or dangerous or both; the catchphrase returns the dare to the person who made it. Sometimes it is said when two people are simultaneously trying to go through the same doorway and awkwardly stop to let the other go through.

Alphonse and Gaston exchanges have also been employed by sportscasters during baseball broadcasts when two outfielders go after the ball and it falls in for a base hit. Shirley Jackson used the phrase as the title of her short story, "After You, My Dear Alphonse," published in the January 16, 1943 issue of The New Yorker.

The phrase "Alphonse-and-Gaston routine", or "Alphonse-Gaston Syndrome", indicates a situation wherein one party refuses to act until another party acts first. From a September 23, 2009, New York Times editorial: "For years, China and the United States have engaged in a dangerous Alphonse-and-Gaston routine, using each other’s inaction to shirk their responsibility."

I also ran into a loosely related term named xenocentrism:

oriented toward or preferring a culture other than one's own

This is really just a case of adapting behaviors in order to follow local customs and "fit in".

You may also hear people responding to question about why they are doing something they don't normally do when visiting a foreign place with, "You know, 'When in Rome...' "

The term is culture clash.

When one or more cultures are integrated into one environment, causing disruption and challenging contemporary traditions. Often occurs in multicultural societies.

Accommodating the other so much that the opposite of what you want to happen (eg, social connection, ease) happens (eg, dis-ease, frustration...)

‘Bending over backwards’ ‘to accommodate someone’.

So you arrive - back at the start of the circle.

72
What is the error called when two letters are mistakenly swapped?
0
Two cultures — "bicultural", one culture —?
24
What is the numb sensation in the mouth caused by some fruits called?
1
What kind of psychic is this one called?
0
What is it called when comparing two opposite people or things
2
What are the two parties of referencing called?
0
What are white spots on the fingernails, caused by leukonychia, colloquially called?