Interpretation of "The biggest thing to happen to iPhone since iPhone"

When I read the phrase

The biggest thing to happen to iPhone since iPhone

I interpreted it to imply that the first occurrence of iPhone happened to itself -- that is,

the first iPhone happened to iPhone.

Is this the correct interpretation, or are there any alternatives that I am missing?

If this is the only interpretation, assuming the happen to phrase is being used to mean have a significant impact on, how does the notion of iPhone happening to itself make any sense (if at all)?

They are saying that the new iPhone is great (which they will of course say) and that the new one is the best thing that has ever happened in "the iPhone world" since the first version was released. That is, while many people may have produced many great apps, and while iPhone 1, 2, 3 & 4 were no doubt great, the new iPhone 5 is far better than any of the rest of them.

The phrase "the greatest thing to happen [to] since ..." is a standard phrase that means that something is "extremely marvellous" or modern or innovative. The literal meaning is related to this meaning but not what the users ears/brain are intended to hear. ie the expression is not analysed or parsed - it just conveys the same standardised meaning any time that it is heard.

A once common variant was "The greatest thing to happen since sliced bread".
Up until about the 1950's bread was almost invariably sold as an unsliced loaf. Pre-sliced represented a radical change in usability and standardisation of slice size and was used as a means of conveying new / marvellous / innovative / fantastic ...modern.

The result was "interesting".
It may be that the renewed and ongoing increase in "sliced bread" references may be due to some late 1950's wit having coined the GTSSB phrase and as it became the default expression it carried "sliced bread" with it.
Interesting, regardless.

It appears that "sliced bread" and "since Adam" may approximate a zero sum game, but it seems more likely that this is a good demonstration of the old saw "correlation does not prove causality".

But to put things in perspective. 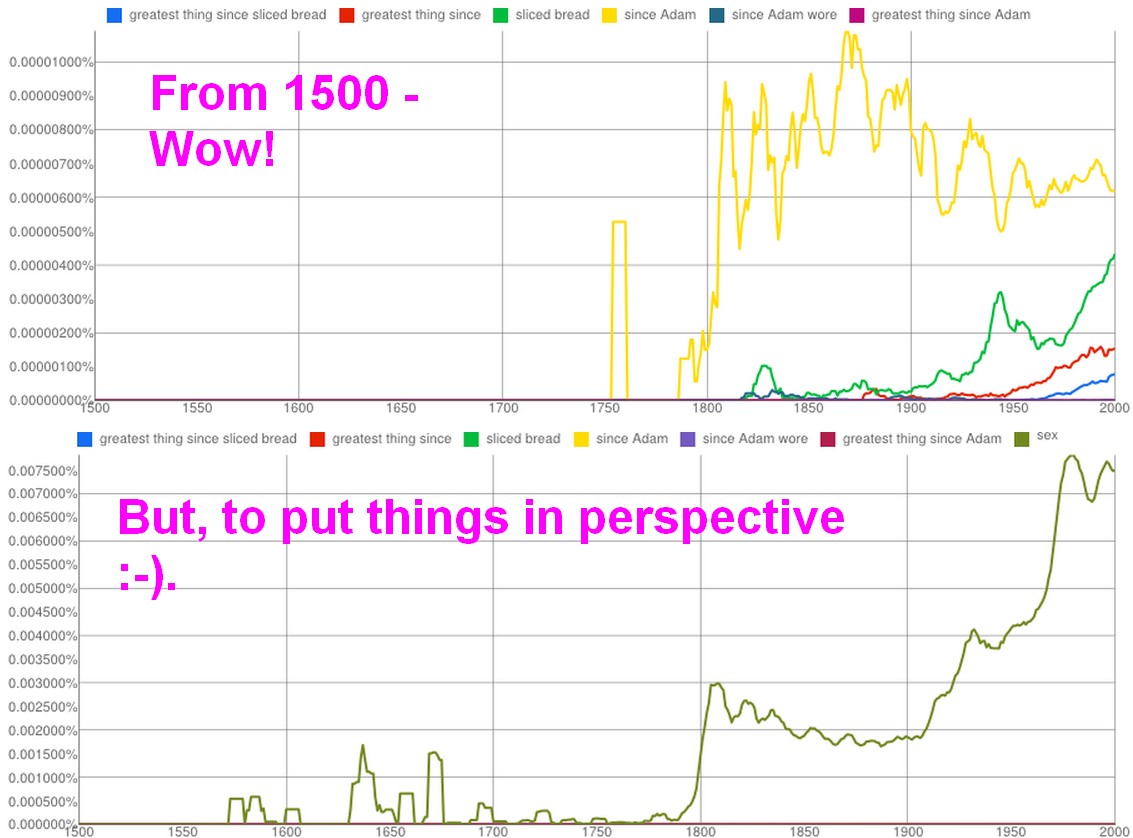 2
What does "in a sinister light" mean?
0
Use of the word "literally" in the definition of literally
7
I'll read that book in 2 hours
18
What does “two-by-six crashing" mean?
1
What does the phrase "You were the best thing that never happened to me" mean?
11
Did the meaning of "significant" change in the 20th century?