When can "very" modify a prepositional phrase?

In Hamlet, when Hammy Jr. asks Polonius whether a cloud looks like a whale, Polly replies,

In contemporary English, however, "very like ..." feels ungrammatical. You instead have to epenthetically say "very much like ...".

Interestingly this restriction doesn't seem to apply to some similar constructions; I find the following all acceptable:

But these still unacceptable:

What determines whether "very" can modify a prepositional phrase?

“Very out of the way”

Sometimes you can use it to mean “very much” or “very far”.

At which point, the whilom preposition starts acting more adverbially, and adverbs can be veried without half so much trouble. But some of the directional or adverbial ones really do seem to be modifiable by degree:

However, back to your main point about very like something.

I’m not sure that I’m willing to call like a preposition (the OED calls it an adjective for these sorts of uses), but here are assorted OED citations of “very like”:

And regarding your original Shakespearian citation, the OED notes that this has become (or was at one time) a set phrase, to be very like a whale:

So in summary, I think that whatever you call like, there is no problem with things being very like other things.

M-W.com says of this usage of like, which is an adjective and not a preposition:

1a : the same or nearly the same (as in appearance, character, or quantity) [suits of like design] —formerly used with as, unto, of [it behoved him to be made like unto his brethren — Heb 2:17 (Authorized Version)]

1b chiefly British : closely resembling the subject or original [the portrait is very like]

Very like a whale is perfectly grammatical in contemporary English. There's nothing wrong with it at all.

Similar to is not a phrasal preposition; it's an adjective phrase because, as stated above, like is an adjective and not a preposition. Grammatical terminology is not easy; it's often misunderstood and misused; and it's often disputed by different schools of linguistics. The names of parts of speech, however, are rarely disputed -- except, perhaps, for a few like particle and adverb. What is more important than the part-of-speech label, however, is the function of the word in the sentence.

The adverb very modifies expressions that can take on different degrees, i.e. whose semantics allow for a scale on which a concept can be compared. We can test for the presence of degrees with a paraphrase such as "to a certain degree." When a prepositional phrase allows for a degree interpretation, modification with very is marginally acceptable.

(1) they are actually very, very in love. (2013, spoken English, NBC: Today Show)
(because paraphrase works: They are in love to a certain degree.)

(2) * They are actually very, very in London.
(because paraphrase doesn't work: ??He is in London to a certain degree.)

(3) I'm very in favor of more torpedoes. (2004, Bk: Wildfire, written English)
(because paraphrase works: I'm in favor of it to a certain degree.)

(6) * I'm here very for my colleague
(because paraphrase doesn't work: ??I'm replacing my colleague to a certain degree.)

However, prepositional phrases are generally taken to express states. Speakers usually use them to convey an idea that can be true or false with no degrees in between. One is either in love or not, in London or somewhere else, for something or against something, etc. Therefore, very does not normally modify prepositional phrases.

To support this, I browsed the Corpus of Contemporary American English for five common prepositions, in, on, of, for and about and counted how often they are preceded by very in comparison to very much. The results are shown below:

(Figure 1: use of very (vs. very much) + preposition in contemporary English)

The graph shows that prepositional phrases occur with very only very rarely, between 0.2% and 6.4%.

(2) The preposition like is special – it derives from an adjective

Originally, the word like functioned as an adjective in English. There are many ways to show this. Here are two adjectival characteristics that like used to possess.

(a) The word used to be inflected like any other adjective. For example, the following Old English example has the word gelicestan, literally like-est – the superlative of the adjective like ‘most like, most similar to.’

(b) The adjective could also be nominalized. That means that you could turn the adjective into a noun just like you can turn poor or blind into a noun today (The poor are suffering, The blind leading the blind). The meaning would be something like ‘those who are like you, fellows, comrades’ (cf. ilk).

Over time, the word like came to be distributed like prepositions. Again, there are many ways to demonstrate this, but I will only mention two arguments.

(a) As an adjective, like occurred almost exclusively with copula verbs, like be. But nowadays phrases with like can easily modify other verbs. Hence, expressions like he swam like a fish, he worked like a maniac, she dressed like a princess etc. used to be impossible but have now become quite common. One of the earliest examples of such modification I found, shown below, is from 1529. The OED (sense B.1.a(a)) lists the earliest date as c1390(a1376).

(9) he dyd live like a wyddower / whiche a fore tyme had bene maryed
(Desiderius’ An Exhortation to the Diligent Studye of Scripture, 1529)

(b) The word like can now be used to introduce a list of typical examples, meaning ‘such as’. The OED (sense D.2(a)) records this usage from 1593 on.

(10) i am acquainted with a sort of men like him
(Voiture’s Letters of Affaires Love and Courtship, 1657)

So, to summarize, the word like is slowly losing adjectival properties, such as adjectival inflection or nominalization, and slowly gaining prepositional uses, like verbal modification or listing of typical examples. Modification of like with very is just another of its adjectival features.

To demonstrate this, I collected some data from the Corpus of Historical American English. I compared the frequency of very like to very much like over time, as illustrated in the pairs of examples below.

I also collected the same historical data for the preposition in. The graph below shows the percentage use of very (vs. very much) for every decade from 1810-2000. 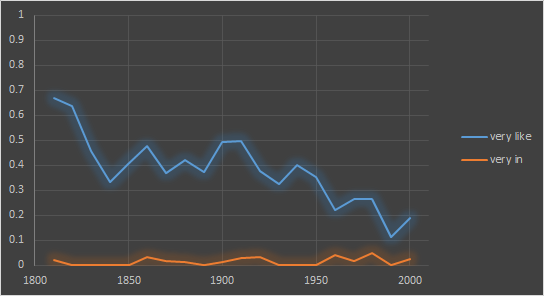 (Figure 2: Historical development of very like and very in)

As the graph shows, (i) modification with very occurs overwhelmingly more frequently for like than for other prepositions like in, by a factor of more than 20, and (ii) modification of like with very becomes less common over time, from 60-70% in the early 1800s to about 10-20% today.

Very is now normally used only to modify adjectives and adverbs, not verbs: it is not a normal adverb. Normal adverbs can modify verbs.

You were exactly at the right place.

You were *very at the right place.

Here exactly modifies the verb were, you could say, or the predication were at the right place. Very cannot do this.

The word like was originally an adjective, and as such it could be modified by very, I believe, as in your very like a whale. It worked just like worth, with a postpositional object:

The house is worth a ton.

This same construction survived up to the present time, obviously, but it is now not always felt to be a true adjective any more. It is rather felt to be a preposition in this construction (and a conjunction in that's just like I did it, which is still not accepted by everyone in formal writing). As a preposition, it usually does not admit of modification by very, just as at the right place above does not.

Very near a whale

This sounds a bit unusual to me, which is probably because near went through a similar development from adjective to preposition.

In these examples, near is used as an adjective.

God is near the second cloud on your right.

Here as a preposition, or, if you want to look at it etymologically, as an adjective with a postpositional modifier (the second cloud on your right).

Prepositions are formed continually in all languages I know (which are admittedly all Indo-European), this is a natural process. It is said that prepositions were relatively new in Proto-Indo-European. They may even have formed only in later stages, as a convergent development in the later proto-languages. Our older prepositions do seem to originate in adverbs, not adjectives:

That ball is out.

That ball fell out.

? That out ball is interesting.

I would read the last sentence as a ball that was "out" in tennis or something, a fairly modern instance of ellipsis.

Date: 13th century 1.a. : having the characteristics of : similar to [his house is like a barn] [it's like when we were kids]

True! The same dictionary also lists "very" as an adjective as user21497 pointed out:

3 like [adjective] 1a : the same or nearly the same (as in appearance, character, or quantity) [suits of like design] —formerly used with as, unto, of [it behoved him to be made like unto his brethren — Heb 2:17 (Authorized Version)]

I would argue that "like" being an adjective and meaning "(almost) identical" as in "like unto his brethren" does NOT make it less prepositional in "like a whale". I'm not saying that "adjective phrase" is the wrong take on this one, but that "unto" is the preposition in this case, which is comparable to "like (a whale)" or "(afraid) of".

According to OED2, as an adverb, "very" is used for emphasis： 1. in a high degree 2. with superlative or own used to emphasize that the following description applies without qualification

In short, where there is no "grey area", nor superlative (very best something), nor own (his very own car), you cannot use "very" as an adverb, and that's personally convincingly why we can't and don't say "He very ran."

Not the answer you're looking for? Browse other questions tagged grammaticality prepositions prepositional-phrases or ask your own question.

34
What is the lexical class of the word 'worth' when used in a sentence like "Is this apple worth $3?"
3
When is 'off guard' hyphenated?
2
In the PP 'near here', why is 'near' the head?
1
Can a PP be analysed as a complex adjective?
1
Should "in-cabin" be hyphenated in "the dogs must ride in-cabin on the airplane"?