Do Americans say “don't” as often as the British?

This is really a question for Americans.

When watching US TV or films, it's often my impression that—while using all the other contractions—Americans don't seem so keen on 'don't' and use 'do not' rather more often than we Brits. I also don't think this difference only occurs when it is stressed.

What I found was that overall, in American English there was a 7.9-to-1 ratio of don’t to do not. With breakdowns by type:

In British English overall, the ratio was 4.4-to-1 in favor of don’t, with breakdowns by type:

So, if it is reasonable to conclude anything from this data, it is that Americans overall use don’t about twice as frequently as the British, but the British use don’t in speech about 2.9 times more frequently than Americans. In any case, these are not big enough ratios to be noticeable by anyone not counting every incidence.

I think we use "don't" and "can't" almost exclusively in normal conversation here in the U.S. "Do not" and "cannot" are reserved for making special emphasis or dramatic effect. But we have a long history of using the word "don't" — particularly in admonishing our former colonial masters. Have a look at this colonial American flag (Gadsden Flag, source: Wikipedia). 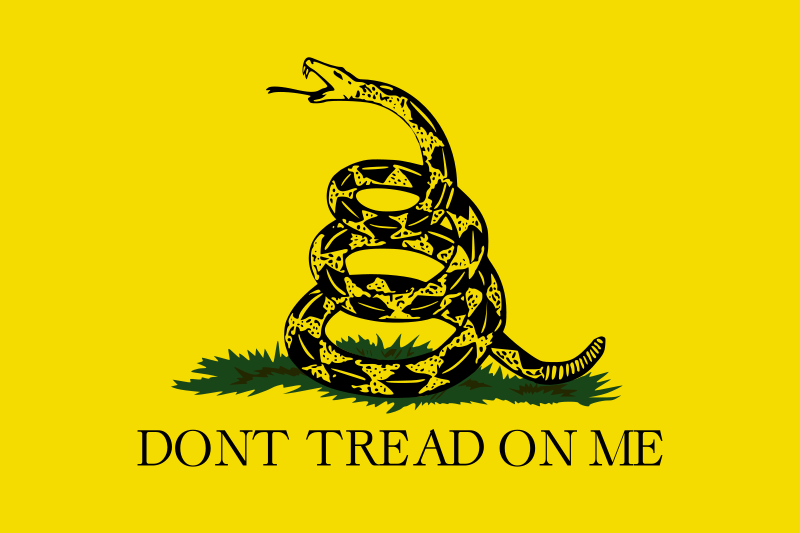 And its naval equivalent: 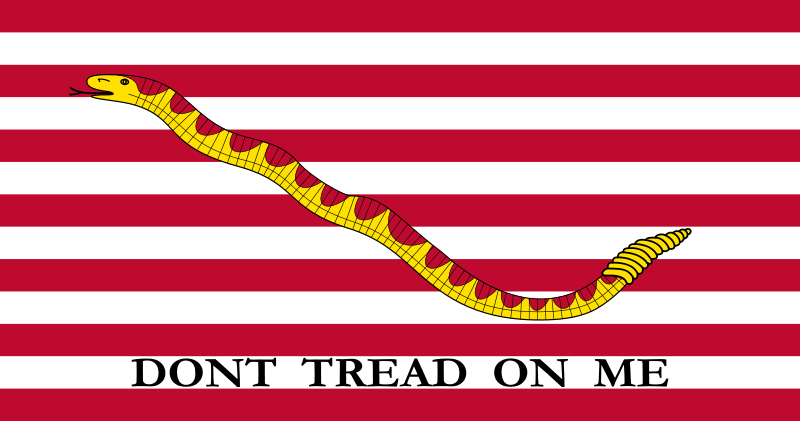 I'm new to the site. I stumbled across this forum question, because as a British ESOL Tutor, living in the USA for the past 25 years, my lesson for my students tonight is about "contractions"! I, from my own personal experience have observed and noted, that the spoken contraction (don't) is definitely 'spoken' less frequently, by all and sundry, around Palm Beach County where I reside. In fact, as a Brit, I treasure be a proud and frequent speaker of contractions, especially (don't!) but my oldest teenage son and his teenage buddies rarely speak this contraction. They, in fact, to my observant ear, only say "do not"! I'm constantly admonishing my son for not saying "don't!", instead choosing his wording in a similar vein to his fellow teens. I will, however, bring to your attention, that my son likes to text IDK, in place of "I don't know". Which then makes me in turn chuckle, because of his infrequent use of the contraction "don't". I need to draw to his attention his acronym doesn't make sense unless he actually uses the contraction "don't" in his conversation, because his acronym should instead read IDNK (I do not know)!

I don't doubt that we say "don't" in the US as much as our cousins across the pond.

That is, I expect usage is similar in the US and UK.

I've voted for nohat's answer, because of the evidence, but I offer my observations anyway:

I find that Americans generally use accepted contractions, including don't. I rarely hear do not except for emphasis. Another data point: In Star Trek: The Next Generation, Worf and Data are conspicuous for their contraction-free speech, again including don't (Worf is formal by choice; Data has some kind of weird programming deficiency). This is actually played up in the show from time to time. Everyone else uses don't freely.

When I was young I was taught not to use contractions in my written works. I wonder if the same English style conventions were taught in the UK, and if that has any effect on American and UK script writers or not.

I believe children are now being taught to write more conversationally, and contractions are not frowned on in written language as much as they used to be.

As the saying goes, “there are three kinds of lies: lies, damned lies, and statistics.” Well, statistics be damned! As an American who has lived and traveled from east to west, and as someone who has spent my career in broadcasting, I assure you that we don’t use “don’t” in everyday speech any less than our British cousins, and possibly more so. I hope that don’t confuse you...

Not the answer you're looking for? Browse other questions tagged word-usage american-english contractions contemporary-english or ask your own question.

5
“Quite” American vs British English
1
“No, I don't” or “No, I do not” in responding English questions

16
Is there a rule in British English about how to pronounce “either”?
26
Using contracted forms (“don't”, “let's”) in a formal text
1
“No, I don't” or “No, I do not” in responding English questions
6
How do they express the time, in American and British English?
1
Do women tend to use the word “lovely” more often than men?
6
Why can't we say “… of its”?