Origin of “pull your socks up”?

I was pulling my socks up this morning, in the literal sense of the term, when I started to wonder about why pull your socks up came to mean what it does:-

to make an effort to improve your work or behaviour because it is not good enough: He's going to have to pull his socks up if he wants to stay in the team.

I searched around for the origin of the phase and turned up some not very convincing answers here (pulling your socks up to make yourself look tidier) and here (military slang, a traditional fallback for folk etymology). Neither of them have any sources cited.

So does anyone know why we came to use pull your socks up for this meaning?

Partridge (2002) gives a definition and suggests a year but no explanation:

The OED collects a number of slang and colloquial phrases that use sock. In one's socks is a measure of a person's stature; to knock the socks off is to trounce another; to pull up one's socks is to make an effort.

No etymology is given for the phrase but their first three quotations are:

1906 Daily Mail The ‘smart set’ have got hold of another neat expression. ‘You must pull your socks up’ is the latest form of saying ‘Never mind’, or ‘Pull yourself together’.

1914 ‘Bartimeus’ Naval Occasions, and Some Traits of the Sailor-man Pull your socks up, Ah Chee, an' think of something.

She got as far as the hall door, and then came rustling back again into the consulting room. "Take a drink of your own beer!" she cried, and vanished.

It sounded like some sort of slang imprecation. If she had said "Oh, pull up your socks!" I should have been less surprised.

Here's an example from Oliver Osborne's In the Land of the Boers (first published 1893, this revision 1900) (read online):

Throughout the wet months we had stuck religiously to the hills, leaving the valleys to fools and fever.

Poor old Harry the Reefer's claims, turned out valueless, and it behoved us to be " pulling our socks up," as the Scots say.

A when and where but not why can be found in the January 20th, 1900 edition of Notes and Queries (read online) amongst other sock phrases:

"To give one socks," meaning " to give one a good beating," is in common use in East Anglia. And so is "Pull up your socks," for "make haste" and "set to work." F. H. Marlesford.

THE "Smart Set" (says a contemporary) has got hold of another neat expression. " You must pull your socks up " is the latest form of saying "Never mind," or "Pull yourself together." The other day at a Bridge dinner, it was amusing (to our contemporary) and a sign of the times to hear a certain youthful eldest son recommend a Dowager Countess of seventy to "pull her socks up."

The phrase is, perhaps, not much more than twenty years old, and so affords fresh evidence of the up-to-date-ness of the Smart Set. Other instances follow.

And, after reporting another Smart Set phrase had been heard in the East End:

This is interesting, as showing how quickly a new witticism will run through all classes of Society, like measles through an infant school. It goes without saying that, as soon as any such phrase penetrates to the lower orders, it is at once discarded by the Smart Set.

In support of the military explanation for the phrase, consider the image of a 16th century English soldier from this source 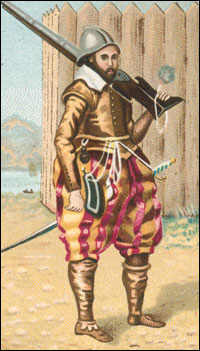 Not the answer you're looking for? Browse other questions tagged etymology phrases expressions or ask your own question.