What is it called when a letter is within another letter?

What is it called when a letter is within another letter? For example, the letter O within the letter L:

Edit: Or the first C in the Coca-Cola logo:

Does this arrangement of type have a name?

I think the word you are looking for may be kerning, but it isn’t quite clear from so small a sample. I can’t tell whether that is just a superscripted o or a drop capital L and a regular o, but in either case the o is kerned into the space of the L.

So I would look up both drop capitals and kerning, and see whether some combination of those ideas answers your question.

Edit: Your logo example is definitely an example of aggressive kerning. Consider these two examples, the first tightly kerned, the second not so:

Notice how the second one above now actually looks wrong, as though it had spurious spaces in it; it’s like this xkcd lesson: 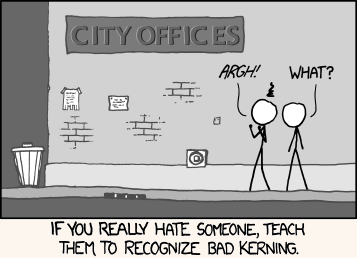 In extreme cases, aggressive kerning can in many cases become actual ligatures; notice all the letters here that actually touch:

Or they can so tighten up with a combination of special kerning and even an occasional ligature so to become a sort of stylized symbol:

The first is a case of kerned drop cap.

The second is apparently an artwork (custom) and not a typographic symbol.

Trademarks, especially, are custom designed artwork that can be purposely different from standard typography.

The two do not fit into a single class.

How about a ligature? This looks close to what you want.

Not the answer you're looking for? Browse other questions tagged word-choice single-word-requests terminology typography or ask your own question.

14
Is there a name for the final section of a letter?
5
What is the error called when numbers are confused with letters?
7
How do you refer to a hyponym that is the same word as the hypernym?
7
What is the term for when one letter is lowercased when a name is in all caps?
3
Different way to refer to a 'lowercase' letter?
14
What is an appointment with friends called?
0
Word for a letter of the alphabet that helps form another letter
0
Wrong letter cases