Wikipedia and The Free Dictionary were not much help — is there a practical difference in the semantics of suffix and postfix, except that the latter is more rare?

File name extensions are well known. For example, index.en.xhtml could reasonably be assumed to be the index file of a website directory, in XHTML format, and with primarily English, human-readable contents. I’d normally call the collection of extensions (.en.xhtml in the example) the suffix or postfix, but it’s not obvious which (if any) is technically and/or semantically more accurate.

I think both can be used interchangeably, although the context sometimes determines which word you are more likely to use. For example, in linguistics, an affix after the stem of the word is called a suffix. In computer programming, when an operator appears after the operand, it is known as a postfix operator.

As far as a file extension goes, my intuition would be to go with "suffix", but I believe that "postfix" would be equally valid.

The word "suffix" has been around since 1778. I was unable to uncover a similar etymology for the word "postfix", leading me to guess that it is a modern invention, as "post-x" is a more obvious candidate for being the opposite to "pre-x". In this regard it is very much like prepone in Indian English, except that it has caught on globally.

From a "pure" English standpoint, postfix is essentially a lesser-used synonym for suffix, both in the noun and verb sense (with the verb being the act of adding a suffix). In fact, my dead-tree American Heritage Dictionary, 2nd College Ed. gives these (and only these) definitions of postfix:

More modern definitions of postfix have cropped up, including the adjective used in computing and mathematics, and a medical verb.

I disagree with Roaring Fish's analysis of the n-grams. I believe postfix and suffix are both rising in large part because of their use in computing. Computer programmers typically use postfix only as an adjective and suffix only as a noun. Therefore, the thing that comes after a dot in the name of a file would only be referred to as a suffix (given just these two choices). The use of suffix dwarfs that of postfix even in computing because plenty more people are exposed to file extensions than to mathematical or programming notation.

Finally, I would like to say that for your particular use (denoting the part or parts of a file name following a dot), extension is actually the most common and preferred term. Normally it refers only to the stuff after the last dot, so if you want to specify the collection of extensions, the most clear alternative is to say just that, or something to its effect. (Other possibilities might be stack, string, or series of extensions.)

Indeed, there is a difference between a suffix and a postfix. A postfix is whatever comes after the base of a word, be it a suffix or an ending or even an enclitic. Thus, under this interpretation, a postfix is a hyper(o)nym, whereas a suffix is a hyponym. 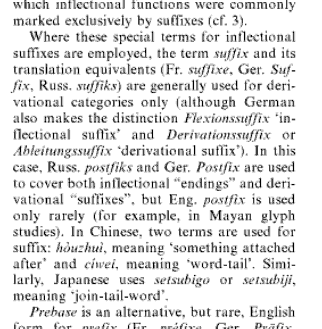 (I say "to my mind" because I am too lazy to check for support... I do not think of "postfix" and "suffix" as being synonymous, at all. But I could be wrong... And I see that other answers here present references contradicting what I've said, saying that they are synonyms. Perhaps my understanding reflects the way these terms are used in computer science, in particular, but I don't know that for sure either.)

The simple answer is that, other than popularity, there is not much practical difference.

OED tells us that postfix is used in grammar and linguistics:

Grammar and Linguistics. An element (e.g. -ly) added to the end of a word; a suffix.

and Ngram tells us that the word has been around since around 1800, which agrees with the earliest 1805 example given in OED.

On that basis, I don't think that computing has much to do with it. It is tempting to say that the recent rise in the usage of postfix is from its use in computing, but as suffix shows a similar rise there is probably an outside factor causing both increases. Ebooks maybe.

To put some perspective on the frequency of use for these two words, neither BNC nor COCA corpora found postfix, but BNC found 148 instances of suffix, and COCA found 145. (That is itself quite curious, as COCA (American English) has 450 million words, while BNC (British English) has 100 million.)

Not the answer you're looking for? Browse other questions tagged meaning differences nouns suffixes semantics or ask your own question.

10
Are there any cases where “prepend” cannot be replaced by “prefix”?
2
The opposite of paper being a dead-tree