Coney and rabbit: what’s the difference?

Are the words coney and rabbit full synonyms in English? Are there any slight differences in usage or meaning? Are there any cases when one word is more appropriate in the modern writing or speech than another one?

Merriam-Webster and Wiktionary reference coney as a rabbit (especially, the European rabbit) without additional remarks. The OED does the same, but with a note British & Heraldry.

Of Leporids and Country Matters

Rabbit or hare, and familiarly bunny, are now the common words for the critters once commonly called coney. The OED reports that coney is now in “more or less familiar use with game-keepers, poachers, game-dealers and cooks”. J.R.R. Tolkien alluded to this in The Hobbit, for as all readers of Tolkien know, a coney is just an older name for a rabbit, as Bilbo observes when interrogating Gandalf about Beorn the skin-changer, and which Sam later cooks up in a stew:

Rabbits are something of an anachronism in Tolkien’s legendarium, not being native to the historical region he was depicting, so he usually chose an older word to describe them. Our word rabbit originally meant only the young, not the full-grown version, for which coney was reserved. The OED tells an interesting tale for the word coney:

As you see by sense 5b, it turns out that coney used to rhyme with honey and money, but this was just too punny for its own good. One of the citations for sense 5b:

So why do we today rhyme coney with bony instead of with bunny as we once did? Too many uncunning punsters, basically, giving it a vulgar sense. Shakespeare himself did this, as shown later in this posting.

Here the OED’s etymology for coney:

The historical pronunciation is with /ʌ/; common spellings from 16th to 18th c. were cunnie, cunney, cunny, and the word regularly rimed with honey, money, as indicated also by the spelling coney; but during the 19th c. the pronunciation with long ō has gradually crept in. This pronunciation is largely due to the obsolescence of the word in general use, while it occurred in the Bible, and esp. in the Psalms, as the name of a foreign animal (sense 3); the oral tradition being broken, readers guessed at the word from the spelling. It is possible, however, that the desire to avoid certain vulgar associations with the word in the cunny form, may have contributed to the preference for a different pronunciation in reading the Scriptures. Walker knew only the cunny pronunciation; Smart (1836) says ‘it is familiarly pronounced cunny’, but cōny is ‘proper for solemn reading’. The obsolescence of the word is also a cause of the unfixed spelling; the Bible of 1611 has conie, cony, conies, modern editions coney, conies (cf. money, monies), an irregularity retained in the Revision of 1885.

The rabbit is evidently of late introduction into Britain and Northern Europe: it has no native name in Celtic or Teutonic, and there is no mention of it in England before the Norman period; in the quotations the fur, perhaps imported, appears before the animal. The Welsh cwning, cwningen, is from ME.; the Irish coinnín, and Gaelic coinean, coinein from ME. or AFr.

About the time that coney was getting bad press for its punny association with cunny, the word bunny appeared as a more clean-minded but still rhyming synonyn for the rabbit version, making it something of a minced oath. But the pun was already there in the original Latin cuniculus, so it’s been with us for a long time.

In As You Like It, Shakespeare has Rosalind liken herself to a coney when she’s speaking to Orlando “like a saucy lackey, and under that habit play the knave with him”:

Orlando. Where dwell you, pretty youth?

Rosalind. With this shepherdess, my sister; here in the skirts of the forest, like fringe upon a petticoat.

Orlando. Are you native of this place?

Rosalind. As the coney that you see dwell where she is kindled.

Orlando. Your accent is something finer than you could purchase in so removed a dwelling.

Notice it’s a decidedly female coney that Rosalind mentions. Shakespeare is being naughty there — or saucy, as he himself put it. Under the historical pronunciation /ʌ/ used in Shakespeare’s thyme, the actor speaking that like would have rhymed coney with honey, and audiences of that age all would have got the joke, just as they did when Shakespeare elsewhere wrote of “country matters”. Without the necessary rhyme, the intended sauciness may well be lost on latterday audiences.

Rabbits and hares are in the Leporid family, which along with rock coneys, make up the Lagomorph order. Rock coneys are a local name for the pika, as OED sense 4 explains. However, it now goes by a different genus: it’s actually Ochotona princeps. But it’s still a coney, even though it isn’t a rabbit or a hare. Sometimes people even call it a whistling hare — not that it is a hare, mind you. Regular folks are very particular about common names for things, you see.

So coney is a sort of older, local, or rustic name for any leporid or even lagomorph, one perhaps still favored by Bilbo’s furriers.

Another place you might come across coney is in the dialect word to coney-fogle, also spelled connyfogle. It means to ingratiate oneself, to cheat by bewildering. [Sources: the English Dialect Dictionary, and also Provincial Words and Expressions Current in Lincolnshire (1866).] This is probably related to the OED’s sense 6 of being a dupe, not to its leporid sense 1, although coney-fogle does sound rather vulgar if you’re a punny-bunny about both halves of the compound.

Coney-fogle may have given rise to the later U.S. colloquialism to honey-fuggle, again meaning to dupe, deceive, or swindle, but not quite so vulgarly. Still seems a bit naughty, though, especially if you haven’t heard it before.

I've only heard the word coney in one context:

In that usage, it's a full synonym. From the Online Etymology Dictionary:

Rabbit arose 14c. to mean the young of the species, but gradually pushed out the older word 19c., after British slang picked up coney as a punning synonym for cunny "cunt". The word was in the King James Bible, however, so it couldn't be entirely dropped, and the solution was to change the pronunciation of the original short vowel (rhyming with honey, money) to rhyme with boney.

So, yes, it's a full synonym, but out of use these days, unless you're into musicals.

The OED has five sub-definitions for coney meaning rabbit. The first four the most recent citations in the late 19th century, and the fifth in the 16th century:

a. A rabbit: formerly the proper and ordinary name, but now superseded in general use by rabbit, which was originally a name for the young only.

b. Still retained in the Statutes, and in more or less familiar use with game-keepers, poachers, game-dealers and cooks: in market reports, now usually meaning a wild rabbit.

c. It is also the name in Heraldry.

d. dial. In some districts applied to a young rabbit, but elsewhere more properly to an old one.

Other definitions of coney or cony are for rabbit fur, a number of other small animals, a term of endearment, and a kind of shell-fish.

Therefore, unless you're going to use coney in a very specific context where it has a special meaning for your audience, you're better off using the much more well-known rabbit.

Unfortunately, its been a long time since I last read Enid Blyton; but I recall coming across 'coney' in some Famous Five books.

IIRC it wasn't used as an exact synonym for rabbit; the impression I got was a local smaller variety of rabbit (something like a country mouse instead of a city mouse e.g.)

In most (if not all) of the USA, coney is a word for a smallish hotdog. 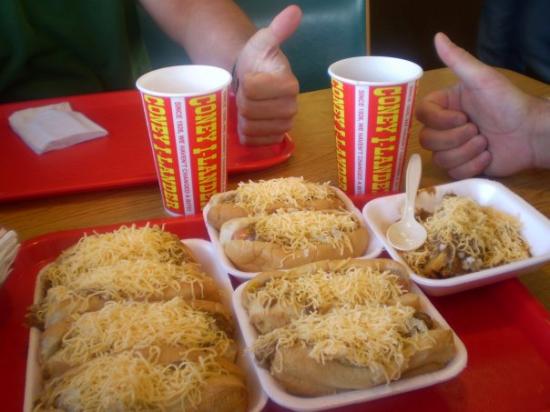 The first time I heard it used in a context that clearly called for a game animal, you can imagine how confused I was.

The animal here is referred to only as a Rabbit or a Bunny (sometimes Bunny-Rabbit). I almost never hear "hare" used, unless somebody is trying to make a pun of some kind. I have never heard "coney" used to refer to the animal in conversation. Only in literature.

The 'Journal of Thomas Dineley' on his tour of Co. Clare, Ireland in 1681 — "Cony Island took its name from the great number of Rabbits and Coneys there..."— seems to suggest, at that time, coneys were distinct from rabbits. Maybe hares?

Not the answer you're looking for? Browse other questions tagged meaning word-choice word-usage or ask your own question.