What is the meaning of "I don't need no stinking counters"?

The context is this video at timeline 43:26 seconds .

That's too fancy for me. I don't need no stinking counters.

What does this mean? Is it an American or British expression?

Wikipedia has a good history of the catchphrase. It originates with the novel The Treasure of the Sierra Madre (1927) by B. Traven (a pen name; the writer's real identity is apparently not known with certainty). Here's the passage:

A few moments later the leader, the one with the golden hat, stepped forward right in the middle of the camp. He put his thumbs close together in front of his belt, wishing by doing so to indicate that he did not mean to shoot as long as the other did not draw.

"Oiga, senor, listen. We are no bandits. You are mistaken. We are the policía montada, the mounted police, you know. We are looking for the bandits, to catch them. They have robbed the train, you know."

"All right," Curtin shouted back. "If you are the police, where are your badges? Let's see them."

"Badges, to god-damned hell with badges! We have no badges. In fact, we don't need badges. I don't have to show you any stinking badges, you god-damned cabrón and ching' tu madre! Come out there from that shit-hole of yours. I have to speak to you."

This dialogue was used, pretty much verbatim, in the 1948 film adaptation (on YouTube here):

GOLD HAT (Alfonso Bedoya): Oiga, senor. Listen, we are no bandits. You are mistaken. We are Federales; you know, the mounted police. We are looking for the bandits to catch them. The ones who robbed the train you know.

DOBBS (Humphrey Bogart): All right. If you're the police, where are your badges?

GOLD HAT: Badges? We got not badges. We don't need badges. I don't have to show you any stinking badges. 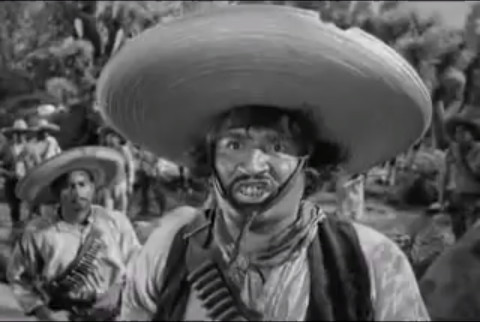 Alfonso Bedoya's performance has been widely referenced and parodied, the most well known reference being the one in Mel Brooks' Blazing Saddles (on YouTube here). See Wikipedia for many other references in popular culture. The phrase is usually given not as an exact quotation from the book or movie, but in the compressed form, "We don't need no stinking badges."

Not the answer you're looking for? Browse other questions tagged meaning phrases idioms meaning-in-context expressions or ask your own question.

8
What is the origin and meaning of the phrase "all day" when used in a commercial kitchen?
8
Meaning and origin of "That dog don't hunt"
5
What does “you don't need a husband, you need a Greek chorus!” mean?
0
‘We just need your umbrella’, what does it mean?
1
What does 'Hot lunch' mean when that's what a man calls a girl?