The married man with an affinity

I was reading a book about events in the 1920's US south; and came across the phrase in a quote from a KKK spokes person. I can't figure out what the phrase means, and haven't been able to find any other use of it to give hints from broader context. For clarity I've included the most complete copy of the quotation I could find from "The Ku Klux Klan In American Politics" By ARNOLD S. RICE, 1962. 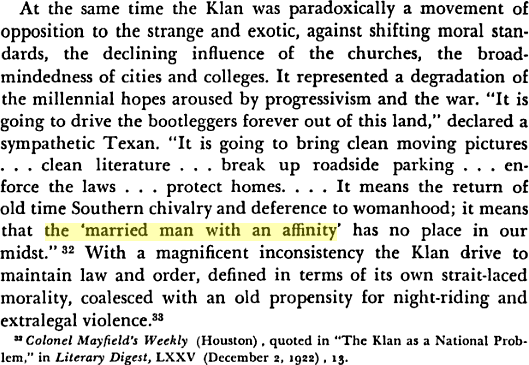 The word affinity is a synonym or euphemism for mistress. The passage is quoting a proverb making the rounds at that time. Notice that this passage uses quotation marks to indicate words which are a direct quotation. See for example, the Coshocton Tribune, June 3, 1918, p. 4:

A married man with an affinity always runs the risk of talking in his sleep [emphasis added].

The example above is clearly referring to a marital indiscretion, but the specific form it takes is not identified in the quoted proverb. It might refer to simple adultery, or to another taboo such as homosexuality, or to any form of infidelity in general.

@KitFox found another newspaper proverb in The Mt. Sterling Advocate, December 28, 1922. This one makes clear that affinity was used at the time to mean mistress:

The rule that a man’s affinity is younger and better looking than his wife is one that knows blamed few exceptions [emphasis added].

Affinity is used here to mean “a penchant for” and it is left to the reader’s imagination as to the object of his affinity. But by context it is clear that it means a penchant for adultery.

The implication is that the married man “has an affinity …” for a woman not his wife.

is an oblique reference literally to the degree of how closely one is related, but here refers to the concept, in Christian law derived from Jewish law, and therefore also used in civil law derivatives, specifically to the possibility of marriage with non-blood relatives. That is, affinity is in contrast to consanguinity, blood-relation, or 'strict' incest, affinity being a broader term including in-laws, and step-relatives.

AFFINITY in the proper sense the word is the connection which arises from cohabitation between each one the two parties cohabiting and the blood relations of the other. It is regarded as an impediment to marriage in the Jewish Roman and canon law...

from "A Catholic dictionary: containing some account of the doctrine, discipline ..." by William Edward Addis, Thomas Arnold, p. 14

In the KKK passage, given the references to 'clean', 'chivalry', and ominously 'roadside parking', the usage of 'affinity' is even broader, intending general proclivity to sexual advances, or philandering.

Going by the context in reference to KKK, and knowing what this organization was devoted to – keeping black people down – my interpretation would be that they were referring to married men who had sexual relationships with black women.

13
What does "proverbial man with a hammer" mean in this context?
10
What did Steve Jobs mean by “Technology married with Liberal Arts” in his last speech?
2
"A man with pride" vs. "a man of pride"
6
Meaning of a sentence in The Man Who Was Thursday
0
Hotel man, what does it mean?
1
Meaning of a sentence from the novel The Invisible Man
3
Can you have a conjugal relationship with someone without being married?