According to the dictionary:

In the picture of the “mountain” word entry in the Oxford Advanced Learner’s Dictionary, they look the same: 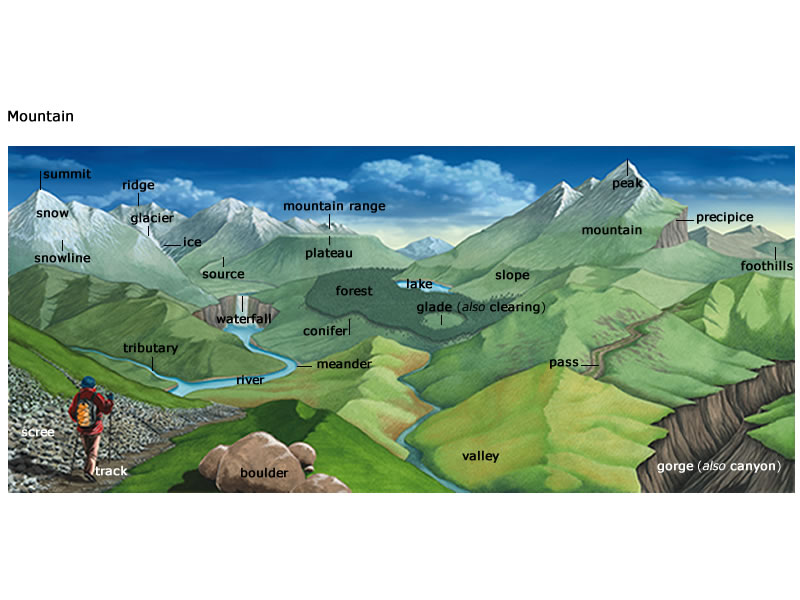 So, what is the difference between these two words in the meaning of a mountain top?

If you go by Wikipedia,

According to this glossary,

The summit is the highest point.

In theory, every mountain has exactly one summit. In practice, mountaineers will in many cases talk about multiple summits (eg Everest South Summit), thus blurring the distinction between "summit" and "peak".

Sometimes as you're climbing you'll approach a spot that looks like it might be the summit, only to discover it's a "false summit".

In the 19th century, "summit" was also applied to other kinds of highest points, such as the highest point reached when crossing a pass.

The same glossary has an entry for peak:

A peak is a point that's higher than all other adjacent points. In mathematical terms, it's a local maximum, the point with slope of zero along a convex-up curve. The thing to understand about this definition is that it is entirely localized: there may be some higher point not far away, but if you can't get there without going downhill first, you're standing on a peak.

In other words, most mountains will have multiple peaks.

So, to sum it all up, unless you are particular about not piquing the interest of some topographical fusspot, it appears that there's nothing wrong in using the two terms interchangeably. However, technically speaking, a mountain can have only one summit, but multiple peaks. It follows that the lone summit is also a peak :)

Actually they are not the same. A peak is a point or an area that is higher than all adjacent areas So it's completely localized, meaning that a mountain can have multiple peaks ( In mathematics, it's called local maximum).

Summit refers to the highest point in a mountain. Oxford:

the highest point of a hill or mountain

and the word comes from the Latin root "summus", which means the highest. Every mountain has exactly one summit.

Having said that, most some mountaineers use these two words interchangeably.

Apparently “synonyms” in that last sentence means “synonyms of summit”. However, the article goes on to use the concept of topographic prominence (“also known as autonomous height, relative height, shoulder drop ... or prime factor”) to differentiate summit from its synonyms:

and then gives a few examples and lists UIAA (a climbing association) criteria used to designate independent summits.

While Mount Everest's South Summit ... is taller [than K2], it is a subsummit of the main summit. Only summits with a sufficient degree of prominence are regarded as independent mountains.

The OED defines summit, in its topological sense, as ‘the topmost point or ridge of a mountain or hill’. For a peak it gives ‘the pointed top or summit of a mountain; a mountain or hill having a more or less pointed summit, or being conical in form.’ There is a clear difference here: peaks can be summits, but not all summits are peaks.

Most of the time they're used interchangably. Peak requires the pointy shape though, which is part of it. Summit is the very top and is not defined by a pointed shape. It just means the very top.

Agreeing with all said before, the terms also have verb usages that are not so interchangable, even though they have very similar sense derivations.

According to the American Heritage Dctionary, the term peak is used as an intransitive verb to mean

to achieve a maximum of development, value, or intensity: Sales tend to peak just before the holidays.

To climb to the summit of (a mountain)

according to American Heritage, and Merriam-Webster

From the perspective of a mountain-climber and peakbagger, I'll try and explain the nuances between "peak" and "summit." Below are the three senses of the word "peak," each compared with "summit," but note they are very much on a continuous spectrum.

Not the answer you're looking for? Browse other questions tagged meaning word-choice differences nouns or ask your own question.

0
What is the difference between a Summit and an Apex?
13
How to refer to the “elevated areas” of a mountain?