Is it right to say “my sandals are broken”? [closed]

I think the verb form broken is only used for fragile things. Can I use it in connection with something that is not fragile, like sandals, shoes or clothes?

If it's not possible, what shall I use in its place?

Of course you can say “broken sandal.” None of these authors had a problem with it. This blogger even took a picture of hers: 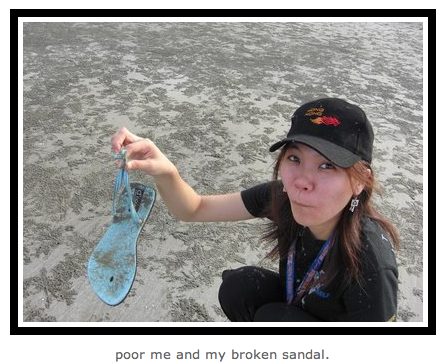 Side note: One definition of broken is “not is working order” (see Collins #7).

You should be able to use the word broken to describe shoes and sandals provided that there is actually a break (like a heel coming off), or something that affects their structure (like a split in the sole). The definition of "break" that we are primarily interested in is:

"Broken shoes" is a term often used as the following Ngram demonstrates:

If it's only a tear rather than a break, then you would use a word like torn. In that sense, clothes are only torn or ripped and never broken. The same applies to similar items such as paper.

As Barrie has observed in a comment, and as attested by ODO, break has a number of meanings which can change depending on the context. You can for example also break in a new pair of shoes which is something that is done to make said shoes more comfortable. Once the procedure is complete, the shoes have effectively been broken in.

I tend to agree with Pantalones. But I would say that break or broken generally applies to things that are capable of being rendered into two or more pieces, and in general only to things that are rigid (but not necessarily hard). However, there are some notable exceptions like rope, tethers, straps, etc.

For instance, you can break a strap on your sandals, but you would "wear out" their soles. Taken as a whole the sandals would be "worn out", not broken.

The interesting thing is that saying they are worn out means they are not capable of being used any longer. If they are damaged and are repairable, people will normally say, "My sandals are in need of repair", or "I have to get my sandals fixed", or, "They need to be fixed". You wouldn't say "they're broken", you'd say "they need to be fixed/repaired". Someone might say "Oh, you broke your shoes!", but they would be having fun with the language by saying something that doesn't sound right to most people.

Clothing is generally handled the same way. The difference is that with things made of cloth or other flexible material you will say they are "torn" if rendered into two or more pieces, even if only partially so.

A different usage would be if you said your car was broken, most people would take it to mean that a part of it isn't working. In other words, something that is part of the whole. If the car is just old and no longer works because everything is failing, you can say, "The car is just worn out". To add to the confusion though, an old euphemism for worn out and no longer usable is, "broken down", but you can understand it from the context in which it is used. If used in the context of a new car, it just means broken. If used in the context of an old man, broken down could mean he is on his last legs, that is extremely frail or going to die soon.

When used in reference to physical objects, to break is usually used with objects having a degree of hardness.

The wrestler broke a table over his opponent's head.

I was climbing the tree when the branch broke, then I fell and broke my arm.

The window was broken with a crowbar.

It would be possible for a speaker to use the verb with physical objects which are not hard, though in such cases the speaker would likely intend its use to be as a humorous device.

My brain is broken.

In so far as your sandals, shoes, and clothing are not hard, it is inappropriate to use the word "broken" to describe them.

5
Can you say “raise an animal”?
5
Word for a shop which sells materials used in making clothing
5
A word that means “at an unusual time or season”
0
Which word is better, damage or defile?
2
The horse PAWED at the sky. Is pawed appropriate here?
2
What is the word that fits both “repair” and “manipulation” categories?
2
How to describe that the color of this pair of socks is too strong or colorful?