What's the raised part of an arch called?

What's that embossed or raised part of an arc or arch called? I am looking for the upper part of the shape, which is kind of raised and forms a mini circle. 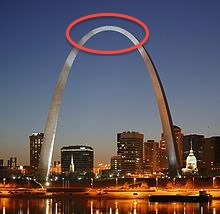 I don't see a "circular" bit at the top of the arch in the OP's picture.

The parts of the arch are:

Perhaps ogive, of which wikipedia says:

Later, the wikipedia article on ogives distinguishes between "spitzer ogives" and "elliptical ogives". A Gothic arch typically is a spitzer ogive, while the Gateway Arch illustrated in the question is a "weighted or flattened" catenary arch. A catenary, wikipedia says, is "superficially similar in appearance to a parabola (though mathematically quite different)". At certain magnifications, portions of parabolas, ellipses, and catenaries look much alike, and I think the top of the Gateway Arch looks a lot like an elliptical ogive.

Wiktionary lists several senses of ogive, including "A Gothic pointed arch, or a rib of a Gothic vault" and "(ballistics) The pointed, curved nose of a bullet, missile, or rocket".

You may also find terms like the following of interest: archivolt (or voussure), "an ornamental molding or band following the curve on the underside of an arch"; spandrel; intrados, "inner curve of an arch or vault"; voussoir, "a wedge-shaped element, typically a stone, used in building an arch or vault". See nomenclature in first diagram in wikipedia arch article.

5
What's the low back support part of a chair called?
2
What's the shape of the upper half of a sphere called?
11
A question for train lovers (a specific part of a steam locomotive)
6
What is it called when a group of people forms a shape together?
6
What's the word for the small square indicating a right angle in a geometric figure?
4
What's an introductory part of the title of an article/book called?
1
What is the transparent part of an envelope called?
10
What is the Pointy Part of a Speech Bubble Called?
18
What's this part of the nose called?
1
What's is called when you think something is better because it's newer/more recent?