"Yes marry have I" usage

I was looking through the original text of a popular nursery rhyme “Baa, Baa, Black Sheep” in Tommy Thumb’s Pretty Song Book when noticed an expression whose meaning I can’t understand: “Yes, marry, have I”.

What does that expression mean? And speaking in general, does this text from the book issued in 1744 look archaic for modern English native speakers? 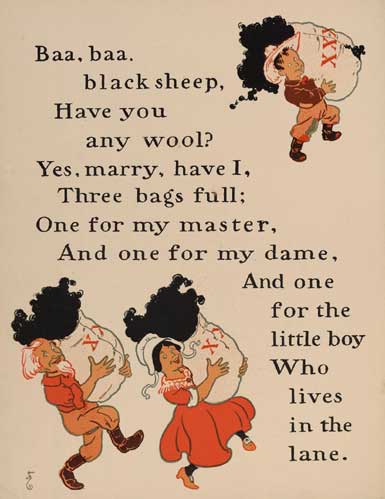 In this passage, marry¹ is not used as an oath or as a term of surprise; it is used as an interjection meaning “certainly”. Wiktionary gives definition “(obsolete) indeed!, in truth!; a term of asseveration”, and illustrates with a quotation from Shakespeare’s Henry IV: “I have chequed him for it, and the young lion repents; marry, not in ashes and sackcloth, but in new silk and old sack.”

This is marry the interjection, which is originally a minced oath. According to OEtmD, the term is an obsolete corruption of the name of Mary, the mother of Jesus.

Shakespeare was fond enough of marry used in this way – and also of the unminced oath by God’s Mother – that both appear in various glossaries of archaic words found in his plays.

A fair reading of the text would be:

This usage of marry is hopelessly obsolete. It's just an interjection (derived from The Virgin Mary, so you could call it a minced oath) that was used to express surprise - in this case, the sheep obviously would be surprised to be asked if he had any wool!

"Absolutely! I have three full bags!"

Also note that as a nursery rhyme today, the third line is invariably "Yes sir, yes sir", because no-one is interested in teaching their kids about that archaic use of marry.

Only the one line that you pointed out looks archaic to me. "Marry" is an archaic interjection which was used as an exclamation of surprise or emphasis. "Have I" is just the switching around of the words. It would read, in modern English, "Yes, I have three bags full."

Not the answer you're looking for? Browse other questions tagged expressions history rhymes or ask your own question.

132
Did English ever have a word for 'yes' for negative questions?
1
"Thunderstorm" vs. "tempest" in common usage
19
Answering a question with another question when the answer is obviously 'Yes'
1
"Houston, we may have a problem here" - Meaning?
2
What caused the spike in usage of Shone just before 1600?
0
Why does orange have a rhyme?
50
Have "choir" and "deer" ever rhymed?
15
"Indian" comes from Italian/Spanish "gente in dios" (God-like people)? False etymology?
3
What would D.O.R.A. have meant in 1929?