English questions and negation with *do* in syntax

A former lecturer of mine once explained why, from a syntactic point of view, the English rule that negation and questions are formed with the auxiliary do follows from other syntactic facts about English.

More precisely, if you gave a good syntactician not familiar with English a corpus of English sentences containing everything but questions and negated phrases, then s/he could infer grammatical rules from it (such as headed-ness of phrases, what kind of arguments what word takes, etc.) From some of these rules, then, s/he could see that something specific would be wrong with the sentences "Gave you the present to Mary?" and "He went not to the cinema."

Can someone explain what exactly this something is and how it follows from other sentences?

FYI, my lecturer did this in Government & Binding with X-Bar theory. This may be more suitable a question for the proposed linguistics.stackexchange.com but as it's not online yet I'm trying it here first.

Edit: the beta is online now at https://linguistics.stackexchange.com/.

Disclaimer 1: I do morphology, not syntax.
Disclaimer 2: The theoretical stuff is Chomskyan syntax, not proven fact.

In any case, the need for do in English is commonly known informally as "do-support". In Chomskyan syntax, the need for do arises from the fact that there is no movement from the head of the Verb Phrase (VP) to the Tense or Inflection Phrase (TP or IP) in English (in contrast to languages like French). (The only exception is the verb "to be" — this verb does raise from V to T.)

So, I guess any English sentences that show a lack of V-to-T movement would infer that do-support or something similar must be used.

One possibility to show this:

Note: the following diagram is overly simplified so that we ignore that the subject noun actually raised into its position also — this stuff is confusing enough already :) 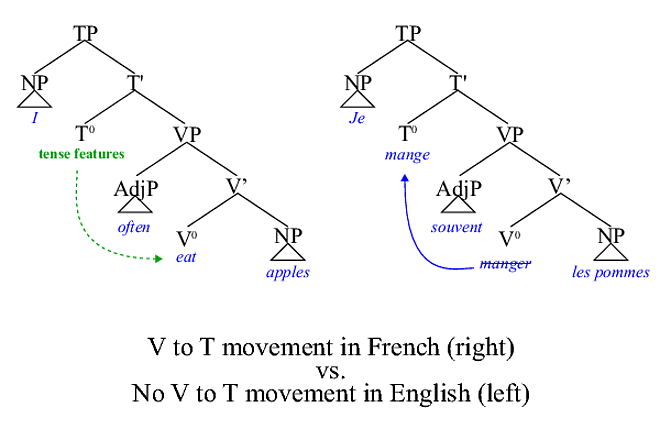 The issues with negation and question formation both follow from the lack of V-to-T movement we see with the adverb ordering. For questions, T moves to C, and so a helper verb is needed since the main verb never made it to T. For negation, I think "not" blocks the passing of tense features from T down to V, so do is required in order to host the tense features (e.g. "do", "does", "did").

Also note that when modal or helper verbs are used (would, could, have, be, etc.), the helper verbs start out on T, so there is no need for do-support.

The assertion is false, at least as you've restated it here. Consider: if I were presented with such a corpus, then, yes, I'd assume that "Gave you the present to Mary?" was probably incorrect, since without questions or negative sentences to work from, I'd not have seen the re-ordering of subject and verb that takes place in that sort of sentence. I would not, however, have any way to conclude that the correct sentence is actually "Did you give the present to Mary?" because the inversion as well as the introduction of the useless auxiliary "do" are quite irregular features, and I would assume from my limited knowledge that "did you give" is actually more incorrect than "gave you", because it makes two alterations to the declarative equivalent.

(I was writing this for a question that got closed as a duplicate of this (Why must “not” frequently be paired with “do”?), so sorry if it's not quite right.)

If you say "I not like him" what do you mean? You need a helper verb there to correctly express the meaning:

You are dissimilar to him

Without the helper verb your sentence is ambiguous.

As another example: "I not like him if X" where X is some reason for not liking him. you need a helper verb to determine if he is likely to do something you won't like him for:

I will not like him if he tries to go dutch

This is something you are guaranteeing, and you think the antecedent is likely (he is likely to try to go dutch).

I would not like him if he got fat

You don't think the antecedent is likely (he is unlikely to get fat) but if he did you would stop liking him.

For the converse situation, "I like not this coat", you are not negating the action (liking), but the noun itself (this coat). This does not require a helper verb, because there is no ambiguity in your action.

According to this page, it seems to have to do with a category of English verbs called modals (the ones used for conditionals, e.g., could, will, etc.). Basically, if a sentence doesn't contain a modal, it needs an auxiliary do to be negated or turned into a question (see examples 13-16 there).

Not the answer you're looking for? Browse other questions tagged negation syntactic-analysis linguistics do-support or ask your own question.

0
Question building in English vs. in French
0
Comparing negatives (It is nice not to be rude.) vs. (It isn't nice to be rude.)
2
Why must "not" frequently be paired with "do"?
0
Meaning of 'do' in questions like 'do you want...'
0
Using "do" to create a question
17
Why do we use 'did' with questions using the simple past tense?
25
What is the origin of the 'do' construction?
12
What is the origin of auxiliary verbs?
4
Why do we use the base form of verbs instead of the past form in past tense questions?
4
Why do we invert word order when asking a question?
See more linked questions

3
Answering questions with a negation at the end
10
Was what happened to the pronunciation of the word "church", as compared to the Scots-English "kirk", a general phenomenon in Middle English?
1
Want to know the components in a sentence, clause, and phrase
2
What is a syntactic construction?
7
What is the predicate in "Is he happy?"