Could "bastard" have a positive connotation?

I'd always thought that the word "bastard" had a negative and impolite meaning, but when I came across this wine (Fat bastard Chardonnay) I started to doubt my belief.

Outside of neutral meaning as "out of wedlock child", it can have a slightly positive meaning in context of "very impressive". It is always slightly derogatory but sometimes it carries a load of awe. Like, when the opponent in sports pulls out a truly impressive stunt gaining a lead against the odds, you might hear "that bastard" uttered with humor and respect.

One frequent phrase is "Magnificent bastard", a person who picks morally ambiguous, or outright immoral means to achieve their goals, but are exceptionally efficient and impressive at that, and not ashamed of it in the least, arising more awe than hate, often arrogant but still likable. Most impressive and likable supervillains (and quite a few morally ambiguous heroes) from fiction are often characterized that way.

There's also a strictly humorous positive use for this when a person uses subversive means to force someone for something good against their will. Say, you try to lose weight, but your willpower often wavers. If your partner steals all your sweets, you might say "you bastard", while essentially praising them for aiding you.

It's not meant to be positive really. There's a bit of a trend in US alcohol sales to use words like that to get attention. Arrogant Bastard beer is another example.

As illegitimacy has lost its social stigma, the word bastard has shifted in meaning over time in the US, and tends to indicate someone who is unpleasant and antagonistic now - as opposed to someone born out of wedlock (as it historically has indicated)

There may be a something of a precedent. Webster's 2d gives -

But it’s more likely the name comes from soft nostalgia for tough North American male talk of the 1950s, where bastard designates one’s adversary, a spoiler, a wildcard, someone who plays by other rules.

Ah took Sam huntin’, he was only an itty-bitty runt just big enought to hold up the gun hardly ... but he was a mean shot from the beginning. And Ah’ll tell ya, he just didn’t like to have anyone interfere with him. That was one thing could always rile him, even when he was an itty-bitty bastard. / Norman Mailer Naked and the Dead

Editorially I can’t push the magazine [the Beacon] to the left because Harris is a shrewd, opportunist bastard who won’t permit it. However, if we load the magazine with Bolshevik writers of national reputation, we can have Harris hanging on a ledge before long. / Saul Bellow to James T. Farrell in an undated 1937 letter

He’s such a comical little bastard ... / James Jones, From Here to Eternity

Traditionally its positive uses are to designate objects "of an unusual shape or proportion; of abnormal shape" (W2) such as a bastard musket, or the viola bastarda. Also plants that might be called psuedo-, such pseudo-daphne for oleander in Greek, are called bastards, a bastard fig being “one of several juicy fruits of the genus Opuntia.”

In a bastarda, [the lowercase o] is pointed at top and bottom and bellied on both sides. / Robert Bringhurst, The Elements of Typographic Style.

William Gaddis, who uses the word seventeen times in The Recognitions, slants it once this way:

Wyatt had modified his handwriting to a perverse version of Carolingian minuscule...The looked like M, and p a declined bastard of h.

As noted in other answers and at the wine company's website, fat bastard can be a term of approbation. The website says, in part,

...Thierry exclaimed “now zat iz what you call eh phet bast-ard”. Guy laughed ... He had used the expression FAT bastard often to describe things that were great but hearing it in a French accent made it so much funnier.

Bastard has long been neutral (not at all negative) in terms like bastard sword and bastard file, of which "Galeanda" writes:

In common language a bastard is an illegitimate child, one born out of wedlock. However it may also allude to something that is unusual, irregular or disproportionate. It is this latter meaning that is employed in the term bastard file, not the former.

A bastard, by definition, is "disruptive." Either in the social sense of being born out of wedlock, or in the personality sense, by being "difficult."

But sometimes "disruptive" is meant as a compliment, in the sense of "world -changing." Taken in this sense, you bastard could be a "backhanded" compliment.

Steve Jobs was a "bastard" in both the "born out of wedlock" and "world changing" senses. But many people believe that he was good for society.

We tell someone you bastard when they do something you should have done, meaning you're giving them a compliment.

Those French! They will offer to sell you a you a loaf of bread called a bâtard. 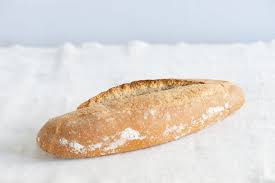 12
Origin of the term 'bastard sword'
10
Origin of current slang usage of the word 'sick' to mean 'great'?

12
What are the possible meanings of positive "any more"?
4
Usage of 'commas' vs 'commata'
14
What does "amletic" mean?
4
Does "unbearable" always have a negative connotation?
4
Is there any dialect of English that uses "positive ever" to mean "once"?
0
Does tricky have unavoidably negative connnotations?
0
Meaning of “Great is the weapon that cuts on its own”
0
Difference between "provocative" and "thought-provoking"