Can someone explain what part of speech the word "before" is?

I'm asking because it seems that these two graphs are both valid, so "before" can be a sub- conjunction (temporal connotation) or a preposition (spatial connotation). 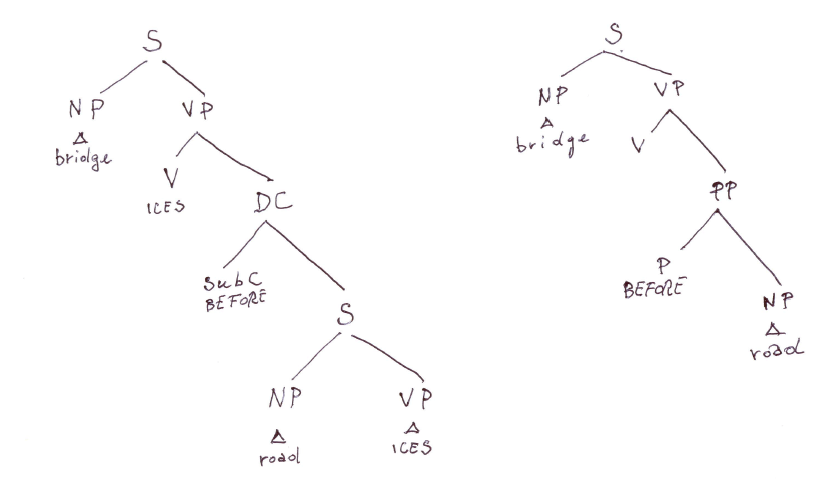 Easy. One tree is deeper structure than the other, so they're both valid, but at different stages of the derivation.

The one on the right, with the complete transitive clause, is what it means, pretty clearly; that's a "deep structure". The one on the left, after the verb is deleted by Conjunction Reduction, is a "surface structure". The terms refer to the meaning and fully-marked structure of an utterance as being "deep", and the syntax that actually occurs after syntactic changes as being on "the surface", part of A Mind is A Container metaphor theme (and since thought is fluid, this comes out as A Pool).

The issue is apparently how the tree node over before should be labelled. That's of no particular consequence; it's the same structure either way. Since it is inconsequential, however, linguists argue about it constantly, though they'd all agree:

The important things are the things that they would agree on. Many syntactic phenomena change the grammatical class of words; There-insertion makes a Subject (and therefore a Noun Phrase) out of there, for instance, which is at least surprising. Temporal and locative prepositions, conjunctions, and adverbs (and phrasal verb "particles") like up change their role to suit their usage in a construction.

So how you label that node is up to you. This is one big reason why I keep saying that asking what Part Of Speech a given word is tells you nothing at all about that word; only about the particular construction with the word. It's constructions that are important.

The Bridge Ices Before Road sign warns drivers that the bridge is more likely to have ice form on it before it occurs on the road. This happens because cold air is able to surround the upper and lower surface of the bridge. This double exposure to freezing air causes the water on the bridge to freeze faster than that on the road. The water on the road is kept from freezing longer because the ground is usually warmer than the air and thus able to prevent its freezing for a long period of time.

Of course the intention is along the lines of: "Be aware of that fact that, as temperatures drop under freezing, the part of the road over a bridge will develop ice before the rest of the road will."

You can't fit all that on a sign though. Street signs are famous for economizing space by throwing out articles and punctuation that might normally be required to avoid ambiguity. Most folks are sharp enough to work out which meaning was intended from context.

There are numerous examples of this. My personal favorite is: 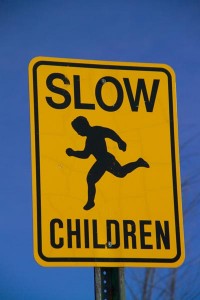 Obviously the intent is not that the people who put up the sign are telling you that their children are slow. Still, it's fun to pretend that's what they mean. :-)

6
What would you write in this case? (a sign in a fitting room)
4
No loitering sign: "Police Take Notice"
9
Correct phrase for this kind of parking lot sign
0
What is meaning of few terms in this paragraph?
2
Can the word "agitate" be used in a positive connotation?
3
What's the meaning of "Lose money" on this sign?
2
How is Dickens using 'as' in ' ... he didn’t know **as** anybody could say how it was ...'?