Pronunciation of 'host' in Shakespeare's time

Listening to the recent film production of Macbeth with Patrick Stewart, I noticed that Duncan says:

Give me your hand. Conduct me to mine host.

Obviously, it's in the text (Act 1, Scene 6). I'm curious as to whether in Shakespeare's time (and dialect) this would have been pronounced with an aspirated 'h', or whether the 'h' was dropped. Presumably 'honour' did not have an aspirated 'h' in the second quotation below.

This seems to appear in other works:

As to take up mine honour's pawn

Mine honour is my life; both grow in one:
Take honour from me, and my life is done:
Then, dear my liege, mine honour let me try;
In that I live and for that will I die.

Here, take my ring:
My house, mine honour, yea, my life, be thine,
And I'll be bid by thee.

Where we have my house, rather than mine house, which suggests to me that mine host, would be mine 'ost to modern ears.

I've found various references stating that 'mine' is used when a word begins with h, however all the other examples I've seen are of silent hs and so are effectively words starting with vowels, whereas host is not.

One can search for all occurrences of "mine h..." in Shakespeare. Ignoring suffixes (so "hostess" gets included with "host"), there are only nine nouns beginning with 'h' that follow the pronoun "mine". One can also account how many times these words occur with "my". The results are as follows:

The two words which we are fairly sure were pronounced with an aspirated 'h' ("hair" and "heart") each only have a single occurrence of "mine", while most of the others have more occurrences of "mine" than of "my". "Host" follows this pattern. Further, "host" comes from French, as do "honest", "honour", "hour", and "heir". There are also three occurrences of "an host(ess)", and none of "a host(ess)". I think this is fairly good circumstantial evidence that Shakespeare did not pronounce the 'h' in "host".

Shakespeare's Pronunciation: Shakespeare phonology with a rime-index to the poems as a pronouncing vocabulary is a rather old book (from 1906) available from google books that talks about just these kinds of issues. It claims that honour makes the (short) list of words pronounced without an aspirated 'h' Shakespeare's time. By omission, it is implied that host would have been pronounced with the initial aspiration, as would have most words beginning with 'h'. Here is the relevant section: 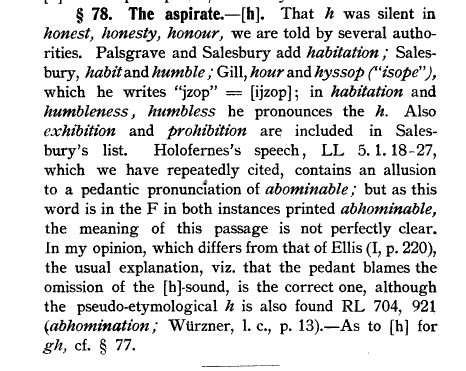 Of course, there are plenty of reasons that this source may not be as accurate as we'd hope. A good summary of reasons is given here, but it basically boils down to:

There are plenty of linguistic tools available to help figure out how things might have been pronounced (e.g. looking at spelling variations, mapping founder's effects, etc.), but there will always likely be a certain amount of guesswork involved.

Not the answer you're looking for? Browse other questions tagged possessives pronunciation-vs-spelling historical-change shakespeare silent-letters or ask your own question.

0
"A beast that wants discourse of reason would have mourn'd longer" in Hamlet
7
Shakespeare's Scansion
8
"As I am wo/man" in Twelfth Night, II, 2 (Shakespeare): a case of indefinite article omission or no?
2
how to understand the following Shakespeare's dialogue?
7
Was Shakespeare's use of "retrograde" an astronomical metaphor?
4
Was Shakespeare's Hamlet truly fat?
6
Did 'lawyer' have a broader meaning in Shakespeare's time?
1
Shakespeare's Macbeth "Conduct me to (mine) host" Mine host vs My Host
1
Voiceless noun endings with voiced verb endings