Which is correct: "could care less" or "couldn't care less"? 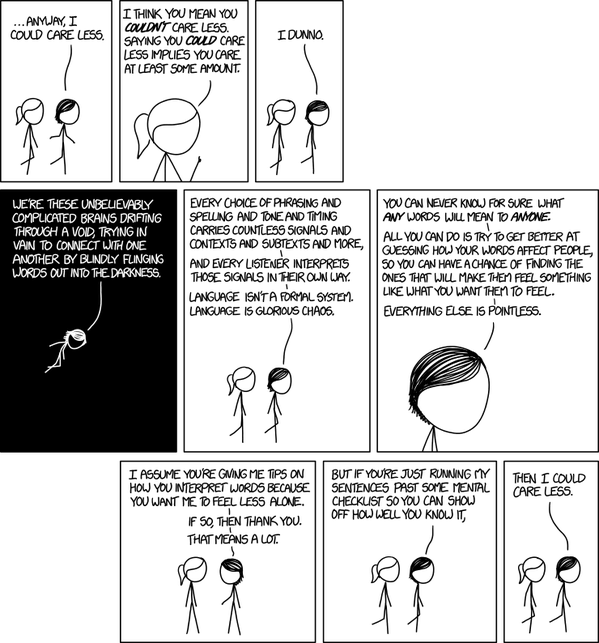 0
What does "couldn't have cared less" mean?
1
Could anyone care less?
0
What's the point in saying "I could care less"?
5
Why do some people pedantically cling to dying word forms (e.g. die, oxen)?
6
Origin of "fat lot of good"
2
When did "I could care less" (rather than "I couldn't care less") become popular?
6
"I give nothing to no-one" or "I do not give anything to anyone"
0
Are both "You can do no worse than" and "You can do worse than" accepted?
0
Is "driving the reins" used as a deliberately erroneous phrase?
3
Austen could care less?
See more linked questions

4
Meaning of "Ain't Seen Nothing Yet"
9
Why do we say "to be a laughing stock"?
16
Greeting: "Cold enough for you?"
5
Origin of "Very Good, Sir!"
35
What's a parallel for 'mitigate', for worsening a good situation?
3
How should we describe a misdiagnosis due to the fact that the correct diagnosis has not yet been discovered?
3
What is the meaning of "I would argue that" and "arguably"?
0
"Hard to understate" versus "Hard to overstate"
20
Is "remove commented out code" correct English?