What is the best term to categorize a lolcat image and text?

I've seen the captions described as a dialect, patois, "kitty pidgin" and language play which is well and good but doesn't get to the key visual aspect (silly/cute/adorable cats). Wikipedia offers image macro, a term with hazy etymology but looks like the best candidate at this point. I suppose one could just call it an internet meme but that lumps it in with a vast number of other things that are less well-known.

Lolcat is an example of anthropomorphisation, internet meme and web humour.

It is also known as a cat macro, or more generally, along with other forms such as the ORLY owl's owl macro, an image macro.

The only image macro definition on Urban Dictionary is from way back in 2005:

A internet forum phrase originally coined in Something Awful forums (like nearly every other internet phrase, really), this is an image with a (hopefully) funny phrase relating to the situation in the thread.

They're usually intended as offensive, but are generally seen as a rather low form of "entertainment" and don't generate much heat in a flame war unless the person or thread it's aimed at is particularly sensitive.

Thread Topic: cute kittens
PostWhore: "My cat is really cute!"
Joe Poster: "My cat is also very cute."
Poster X: image of a man in spandex with the words "THIS THREAD IS GAY" superimposed over it

Cat macro is a bit later:

(Also lolcat.) A picture of a cat doing something seemingly-innocuous, with words photoshopped over the picture. Probably an offshoot of the orly owl.

"I see what you did there", "oh, hi, I upgraded your ram", and "aggressive cat is aggressive/defensive cat is defensive" are three popular cat macros.

A macro is originally a computing term as a single instruction that could expand automatically into several instructions, like a shortcut to save the programmer effort.

The Something Awful forum allowed their users to type in pre-defined words in square brackets, and the software would automatically expand it to show a certain image. For example, typing the [img-timeline] shortcut would show a Timeline of History image in the posted message. [img-hooray] and [img-blownaway] would show early examples of more familiar-looking images: 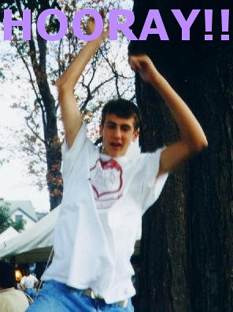 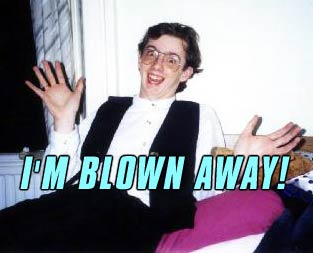 A 25 August 2001 archive of the Something Awful FAQ lists some other image macros:

Image macro: "Canadian Maniac [joined Jun 25, 2000] always posted the same image in response to almost any thread. It was 'Can't Stop The Music' and was a still from a VHS of some guy dancing or some shit. Lowtax publicly asked if we thought he should be banned if he continued it. Most said they didn't mind, or thought it was funny. I thought it was funny, but of we all knew course R-Lo could do whatever the flying fuck he wanted, as it is his server and his bandwidth. Basically everyone said they did not mind the repeated image.

"About two days later Lowtax announced Macro Images, and for 2 fucking weeks every post was responded to with I'm Blown Away, [img-timeline], and a whole bunch of other annoying shit. Finally someone started a thread complaining that Macro Images were annoying and should be discontinued, to which Lowtax basically said, 'NO SHIT, YOU MEAN IT IS FUCKING ANNOYING WHEN THE SAME STUPID IMAGE IS POSTED AGAIN AND AGAIN AND AGAIN IN RESPONSE TO EVERY MOTHERNUNFUCKING THREAD????'" (Psycho Donut Killer)

Now, the term Image Macro refers to any frequently used image, usually with text proclaiming "YOU SUCK AT THE INTERNET!" or something.

Many of these are images with big text captions overlaid, very similar to lolcat images, and the term was then used more generally for any such joke image.

Here's a Something Awful thread started on October 22, 2001, titled "Ill advised image macros never intended for use", and a post with two "non-gif image macros" from May and August 2001. Here's an early use outside SA from 25 September 2001.

Lolcat, the "language", is also known as lolspeak or kitty pidgin, and is related to leetspeak. For much, much more on the relations and growth between these things, see A Special In-Depth Analysis by David McRaney – L337 Katz0rz.

A lolcat is a type of poster, specifically one with a funny caption.

"Captioned image" is a little less abstract, but i think "lolcat" is the best term.

go with ersatz language (as mentioned by Cameron in the comments) if you are trying to categorize lolcatz as a feature of language.

however, if you are just looking for something general to categorize lolcatz as, try pop culture. as in "A lolcat is an example of pop culture"

Not the answer you're looking for? Browse other questions tagged dialects internet humor or ask your own question.

1
When could you take the "Urban Dictionary" seriously?

184
What is the origin of ZOMG?
46
Where does the term "Smurfing" come from?
0
Does the term "page responsible" make any sense in English?
1
Why is the past tense of text, as used by some people, pronounced "text-ted" and not just "tested"?
4
Can the term "ProTip" used in a non-offensive context?
7
The term “handy” in “Of Mice and Men”
3
Is there a specific term for humourous repetition where the repeated thing is only funny through context?