It would seem that the Random House dictionary and the World English dictionary have different ideas about the etymology of the word embarrass, neither of which make it particularly clear as to how it got its current meaning:

World English
[C17: (in the sense: to impede): via French and Spanish from Italian imbarrazzare, from imbarrare to confine within bars; see en- 1 , bar 1 ]

So which is correct, and how did it come to have the meaning of making somebody self-conscious and abashed?

Etymonline.com says the meaning of making somebody self-conscious is first recorded in 1828 and shows a French and Italian origin:

The OED says the etymology is from "French embarrasser, lit. ‘to block, obstruct’, < embarras" and their first quotation for making someone feel awkward is from Webster's 1828 An American dictionary of the English language. 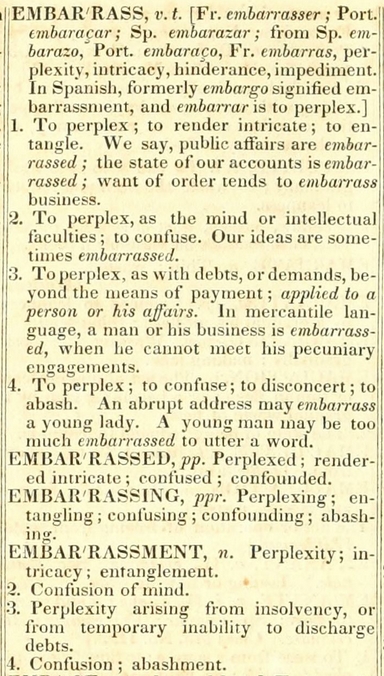 Q: and how did it come to have the meaning of making somebody self-conscious and abashed?

It originally meant to literally encumber, to hamper or to impede; or to perplex, to confuse. It later then came to the modern meaning, as in OED's definition 2.b.:

To make (a person) feel awkward or ashamed, esp. by one's speech or actions; to cause (someone) embarrassment.

So one's speech or actions are stopping and perplexing the other, which causes the feeling of awkwardness.

Here's some examples from the introduction to Webster's 1828 dictionary that show the different meanings:

For what it's worth, embarrassing is a term of art in the British courts, meaning 'impossible to prove or disprove (and so having no place in a court of law)'. I would imagine the 18th century meaning was more towards the Old French/Latin obstructive,and the English gradually evolved since there were several words already for 'hindering/obstructive', but no good term for 'making somebody feel self-conscious'. The French word seems to have followed a similar course, though not to the same extent.

Since both sources agree on the Spanish origin of the word, I will contribute that the Spanish Royal Academy (the Spanish language authority) gives the same Portuguese origin as the Random House and proposes a possible Celtic ultimate origin (based on Ancient Irish barr, meaning forelock or crest).

French embarrasser, to encumber, hamper, from Spanish embarazar, from Italian imbarazzare, from imbarazzo, obstacle, obstruction, from imbarrare, to block, bar : in-, in (from Latin; see en-1) + barra, bar (from Vulgar Latin *barra).

The etymology of the word accounts for its current meaning:

The words embarrassed, embarrasser, and embarazar are most likely all derived from the Portuguese “embaraçado” (to be self-conscious or ashamed).

“Embaraçado” has its etymological origin in the phrase “em baraço”. “Em” meaning “in” and “baraço” meaning noose (“baraço” could be derived either from the Arabic word “marass”, meaning “rope”, or the celtic “barr”, meaning “threads”, “tuft” or “knot”).

During the medieval and early modern periods, a punishment could be imposed by either the civil authority or the inquisition whereby the accused was condemned to wear a noose around their neck while in any public setting. It was required to be clearly visible and could not be removed in any circumstances. The punishment could be imposed for a period of days, months, years, or even decades.

The forced act of wearing a very visible and public sign of one’s crimes or sins resulted in the phrase’s acquired meaning of shame, self consciousness, social discomfort, etc.

Although the evolution of the word’s use in Spanish and French clearly influenced the English usage in later centuries, modern English would seem to have regained the original, medieval, origin of the expression.

user58025user58025
1
1
Add a comment  |
Highly active question. Earn 10 reputation (not counting the association bonus) in order to answer this question. The reputation requirement helps protect this question from spam and non-answer activity.

22
What is "embarrassing" about an embarrassingly parallel problem?
0
"Embarassed" vs. "ashamed"