What color is “puce”, and why do different people give radically different answers (purplish vs greenish)?

It seems like "puce" means two different colors depending on where you live. I always thought puce was green, then saw on Wikipedia that it is purplish-brown. Further research tells me that it's generally regarded as purplish-brown in the United States, whereas Europeans think of intense shades of green when they hear the word. (The etymology relates to fleas, and the color of their blood-stained droppings.)

So, why do people think of it it so radically differently, and wherever did the concept of green come into the word puce?

On the difference in interpretation:

I found an interesting grammarian blog on this very topic. Essentially, the post avers that puce is dark purple, but acknowledges the false notion of a "puce green" still persists. (It's theorized that the term might be an adaptation of puke green, but also readily acknowledged that there's no strong evidence to prove that notion.)

Also, I found a dress on Ebay today that was described thusly:

This fabulous Chetta B size 14 cocktail dress is created in a gorgeous deep, rich eggplant purple with a shadow of puce green in a beautiful brocade that is 100% silk.

I suppose that would mean the dress in question is puce-on-puce?

Lastly, I typed "Puce dress" into Google's search engine, and then clicked Shopping; this is what showed up on my screen: 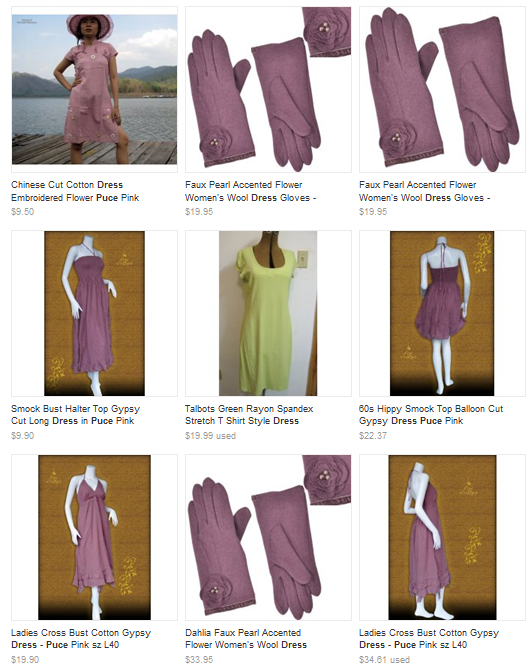 The conspicuously un-puce dress in the middle is being sold as used, so it might disappear from the search query results in a few days. However, it does present some tangible evidence that some people indeed mistakenly refer to pea soup green as puce green.

As for why such misperceptions persist and become widespread, it only takes one exposure to misinformation to lock it into one's brain. This reminds me of a friend who once related how, while working on a project in his garage, he playfully asked his daughter to fetch him a "sawdonkey", making what he assumed was an obviously humorous pun on the word "sawhorse". Problem was, his young daughter didn't know what that object was called, so she simply noted the reference, and tucked it into her brain. Several years later, she was working on a stage crew in college, and it took five or six people to convince her that the object in question was indeed called a sawhorse, not a sawdonkey – she even called her dad that night to verify.

The word entered English from the French, where it had become a fashionable colour amongst the French aristocracy. The earliest OED citation in French is 1775, and in English is 1781 for the noun and 1787 for the adjective, but I found an earlier English example.

In the 1779 epistolary novel The Sylph, published anonymously by Georgiana Cavendish, Duchess of Devonshire, the protagonist appropriately describes confusion with new and unfamiliar colour names:

I have had a thousand patterns of silks brought me to make choice and such colours as yet never appeared in a rainbow. A very elegant man, one of Sir William's friends I thought, was introduced to me the other morning.-I was preparing to receive him as a visitor; when taking out his pocket book he begged I would do him the honour to inspect some of the most fashionable patterns, and of the newest taste. He gave me a list of their names as he laid them on the cuff of his coat. This you perhaps will think unnecessary and that, as colours affect the visual orb the same in different people, I might have been capable of distinguishing blue from red, and so on; but the case is quite otherwise; there are no such colours now.

"This your ladyship will find extremely becoming - it is la cheveaux de la Regne; but the colour de puce is esteemed before it, and mixed with d'Artois, forms the most elegant assemblage in the world; the Pont sang is immensely rich; but to suit your ladyship's complexion, I would rather recommend the seuile mort, or la noysette".

Fifty others, equally unintelligible, he ran off with the utmost facility.

I've no idea why some people think puce is greenish, but I did find this from an 1811 The Medical and Physical Journal:

This isn't necessarily saying puce is green; it's saying this green tea is coloured green with a hint of puce (whatever colour puce is).

I expect the confusion is much older, but puce has been mistaken at least in 1992:

I said. "Nobody could pee that much. A beautiful color, puce." "Puce is pink, not yellow," Abdhul said.

... Most people describe it as an icky yellowish green, when it's actually a reddish brown.
NW: Could that be because puce sounds like puke, so we think of vomit?
LE: Probably. There is something more than slightly odoriferous about the way the word sounds. But there's an alternative name taken from Old English that sounds even worse: pewke.
NW: Whereas puce comes from the French for "flea"?
LE: Right. That's how to remember that puce is a reddish brown — it's the same color as an engorged flea belly.
NW: That's kind of up there with puke. "Oh, I love this dress! It's the color of an engorged flea belly."
LE: Not a pretty picture, is it? We'd swear Wuthering Heights is one ...

Also, one needs some code to run at the outset that insures the color table is the way you like it when you start up Smalltalk, or after you've done something else, your pretty sky blue Browser label may have turned a sickly puce!

The only explanations I've found involve mistaking puce for a puke green.

The Macmillan Dictionary offers both American and British editions, both of which agree on the definition of puce:

Dictionary.com quotes this etymology for puce:

I don't see the color green referenced in any of the preceding sources.

EDIT II: To answer the question, people may associate puce with green because they confuse "puce" with "puke." This article, which asserts that Louis XVI coined "puce" to describe the color of one of Marie-Antoinette's dresses (which, truth be told, is a sort of pukey green) may lend credence to this theory.

My answer: It has nothing to do with where you live. Thinking puce is a greenish color is always an error.

Not the answer you're looking for? Browse other questions tagged meaning word-usage etymology differences colors or ask your own question.

24
What is the origin of “Color me confused”?
4
Pronunciation difference between “collar” and “color”
55
What is the etymology of “yellow”, and why is it so different in other European languages?
11
Why are dogs “neutered”, horses “gelded”, and people “castrated”?
11
Prof. John Dalton, “daltonism” and “color blindness”
1
Are BrE “colour” and AmE “color” two different orthographic words?
0
What does 'shouty color' mean?
5
Connotative history and recent usage of “Person / People of color”
3
Why are “theism” and “deism” different?
2
why the color word is used in this way: “dark” chocolate and “black” coffee