Difference between "chest" and "trunk"

According to several dictionaries, a "trunk" is a large case or box that can be used when travelling or for storage, whereas a "chest" is used only for storage. Is that the only difference between the concepts of "chest" and "trunk"? Which word is more common? Which one comes to your mind first when you see that kind of large box?

These definitions were found on Wordnik:

chest:
- A sturdy box with a lid and often a lock, used especially for storage.
- The part of the body between the neck and the abdomen, enclosed by the ribs and the breastbone; the thorax.

trunk:
- A large packing case or box that clasps shut, used as luggage or for storage.
- The body of a human or animal excluding the head and limbs.

I found it interesting that the words were practically synonymous in two very different senses.

As to your comment: dictionaries do not seem to be very specific when defining "trunk" and "chest", that's partly because, much like the storage items themselves, the words are very versatile.

There are other ways the words differ, too: some might call a bureau a chest (or chest of drawers), and many of us carry a key that opens the trunk of our car. I suggest visiting the Wordnik pages for expanded definitions and example uses.

As for using the words in your original sense (to describe an object such as the one depicted below), I think you were onto something when you said we'd be more likely to travel with a trunk than with a chest, but I might use either word to describe the object in the picture. 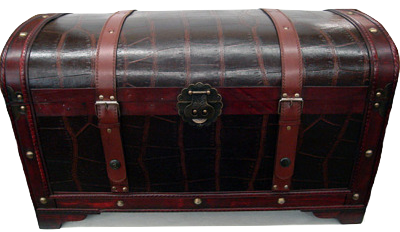 Both words overlap in meaning but also have some very different alternate definitions, and dictionaries notoriously don't give the nuance that is obvious to native users of the words.

A chest is - a large reinforced container of a certain size - a large piece of furniture for holding clothes (a chest of drawers) - the thorax (the lungs, heart and breast area) considered from the front. From the back it is referred to as the upper back.

A trunk is - a large reinforced container (of that same general size, so synonymous) - the enclosed storage area in a car (in American English) - the main part of a tree coming out of the ground (and by analogy any large cylindrical conduit or linearly organized central 'thing'. - the main part of the body excluding head and limbs

Because of these many meanings, an ngram comparison will be very misleading (who knows which meaning is being used?).

For the thing one travels with, 'chest' or 'trunk' feel equally interchangeable (especially given that one normally just uses a 'suitcase' nowadays). On reflection, it feels like 'trunk' would be more likely to call the thing you travel with (as it is also a synonym for a 'suitcase', but chest is not).

For the anatomical regions, even when used informally and not technically, 'chest' is much more common; one is more likely to refer to the specific area, chest or abdomen (the lower part of the trunk) rather than the entire trunk.

That is basically it.

A chest has connotations of keeping valuables safe, a tradesman would keep his tools locked in a tool-chest for example. A trunk would usually be used for clothes, and would be lined in some way to prevent them from being torn. Traditionally it would be covered in leather.

3
The differences between: deliver, ship, and transmit
1
Is it proper English to say "allocate [someone] among [something]"
2
What's the difference between a half-truth and a half-falsehood?
2
"A feeling of content" or "A feeling of contentment"?
1
Colloquial definitions of 'nice', possible alternatives?
5
What is the word to describe an advanced vocabulary?
6
What is the purpose of using the word "coequal"
7
Is there any difference between "congenial" and "genial"?