Why "the Sun Tzu" instead of just "Sun Tzu"?

I am reading a military history text that repeatedly refers to "the Sun Tzu" but does not give similar treatment to other authors (an example is "Clausewitz and the Sun Tzu disagree on ..."). I have never seen this usage of the definite article with the author's name, and it seems incorrect to me.

The work (or collection of works) known as "The Art of War" is usually referred to as "by Sun Tzu" — but scholars have long thought that there were multiple authors, or that the work was actually written by someone else entirely: http://en.wikipedia.org/wiki/Sun_Tzu#Historicity.

Given so much scholarly ambiguity, the author of your text may simply not have wanted to commit to a definite opinion about the work's authorship. (In a similar quandary, I would have referred to "the Art of War" throughout, but your author might have found that unwieldy.)

I concur with MT_Head's explanation, and have voted it up.

I did some research on this last night, and found examples of both uses. First, a work that refers to the work as if it has a single author: 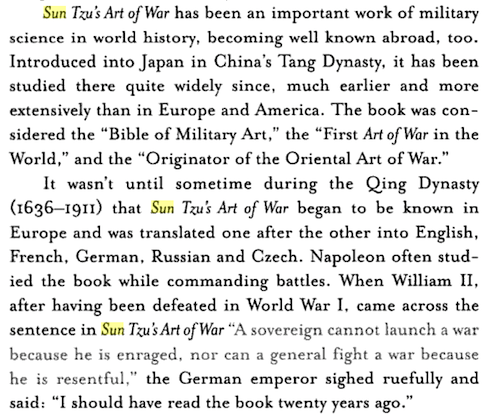 Next, a work that uses a definite article when referring to the work: 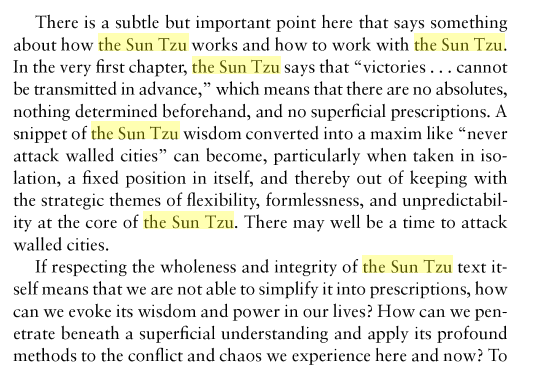 Lastly, a work with a footnote that delves into some of the authorship ambiguity that MT_Head so concisely described: 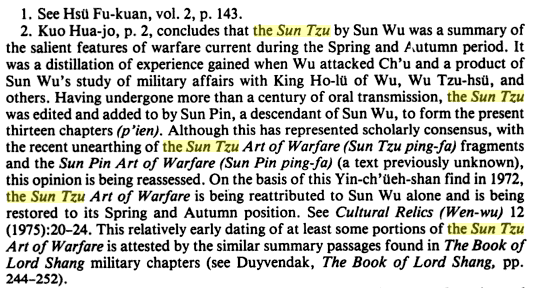 The three sources (in order of their appearance):
(1) Sun Tzu's Art of War: The Modern Chinese Interpretation by Tao Hanzhang & Yuan Shibing
(2) The Rules of Victory: How to Transform Chaos and Conflict–Strategies from The Art of War by James Gimian & Barry Boyce
(3) The Art of Rulership: A Study of Ancient Chinese Political Thought by Roger T. Ames

Incidentally, the first quote comes from the authors' introduction the The Art of War, where they assert: "It is indeed Sun Tzu who wrote the book and not, as some have suggested, the writings of someone else in his name." I'm not going to weigh in on the authorship debate, however. Someone much wiser than me once advised long ago,

That seems like sound advice, especially when stepping into the minefield as a scholarly battle.

It is common practice to refer to a work by the author's last name.

Imagine a band was playing a number of pieces by different authors. When starting rehearsal, the director could say

Pull out the Holst.

And would be referring to whichever piece of Holst's the band is playing, such as First Suite in Eb. So long as they are only playing one piece by each author, it isn't confusing.

In your case, I would imagine that the author is talking about Sun Tzu's The Art of War when he refers to "the Sun Tzu," given the context. My only other thought is that the author doesn't think of Sun Tzu as a person, but I don't see how or why he would do that.

At least that's the sense I get when the source is a book that is itself about military history.

The Tzu/Tze/Tse (子) in Sun Tzu, as well as in Lao Tze, Kong Tze (Confucius), etc. is not part of the person's given name, but more a title, meaning "teacher" or "master". So Sun Tzu means "Master Sun".

Perhaps the writer attached the "the" to indicate this (though it comes across as an affectation), similar to "The Emperor Haile Selassie" or "The Goddess Isis".

Not the answer you're looking for? Browse other questions tagged articles definite-articles or ask your own question.

7
Definite or indefinite article in "the/a devil's advocate"
13
Do idioms pose an exception to normal definite and indefinite article usage?
4
Why are religious texts ("The" Bible, "The" Torah, "The" Qu'ran) preceded by "The"?
0
Lowercase "moon", "sun" and "solar system"?
4
Use of the definite article by Hemingway in "For Whom the Bell Tolls", in a way that doesn't seem to mimic Spanish grammar
1
A brief history v. the brief history - what explains the difference in function?