What's the difference between 'china' and 'porcelain'?

What's the difference between 'china' and 'porcelain'?

That China means "from China" was pretty simple, much more interesting is from what porcelain came out:

Look up porcelain at Dictionary.com 1530s, from M.Fr. porcelaine, from It. porcellana "porcelain" (13c.), lit. "cowrie shell," the chinaware so called from resemblance to the shiny surface of the shells. The shell's name in Italian is from porcella "young sow," fem. of L. porcellus "young pig," dim. of porculus "piglet," dim. of porcus "pig."

So we have a shell (cowrie) that resemble a young sow. Then came this new material from China that resemble the shell material for smoothness and glossy, so they took the Italian name of the shell for the material. Curiously enough now the shell is called Ciprea in Italian, I never heard the word Porcellana in Italian in relation to any shell.

Originally, "china" referred to porcelain-ware that was imported from China. It has evolved to a more general use to refer to somewhat fancy tableware and vases made of porcelain.

They're pretty much the same: china is a type of porcelain. "China" can also be used to mean household tableware, much the same as "silverware" can refer to any utensils, even those that are not made of the precious metal.

“porcelain” is the name for the kind of vitrified ceramic that export-quality Ming and Qing-era Chinese pottery was made of; “china” is the collective noun for goods, especially fine dishware, made of such a ceramic. In practice,

they are almost completely synonymous

since (a) “china” is also used informally and attributively to describe such a ceramic, especially in relation to dinnerware or Chinese-style vases, and (b) both are used to describe other ceramics that look similar or serve a similar function.

Marco Polo described and probably introduced a discount version of Quanzhou (“Zayton”)’s Dehua (“Tinugui”) porcelain to Europe under the name “porcellana” (“piglet,” applied via female anatomy to China’s medieval cowrie currency and thence to similarly shiny ceramics). That’s the term the Portuguese used for the material (“...vesselles made of the fine earth cauled Porcellana...”) and the goods made of it (“They sel the Porcelanas which is the fine dishes made of whyte clay...”) when they finally reached China by sea and began shipping crates of the stuff back to Lisbon for the European market in the 1500s. 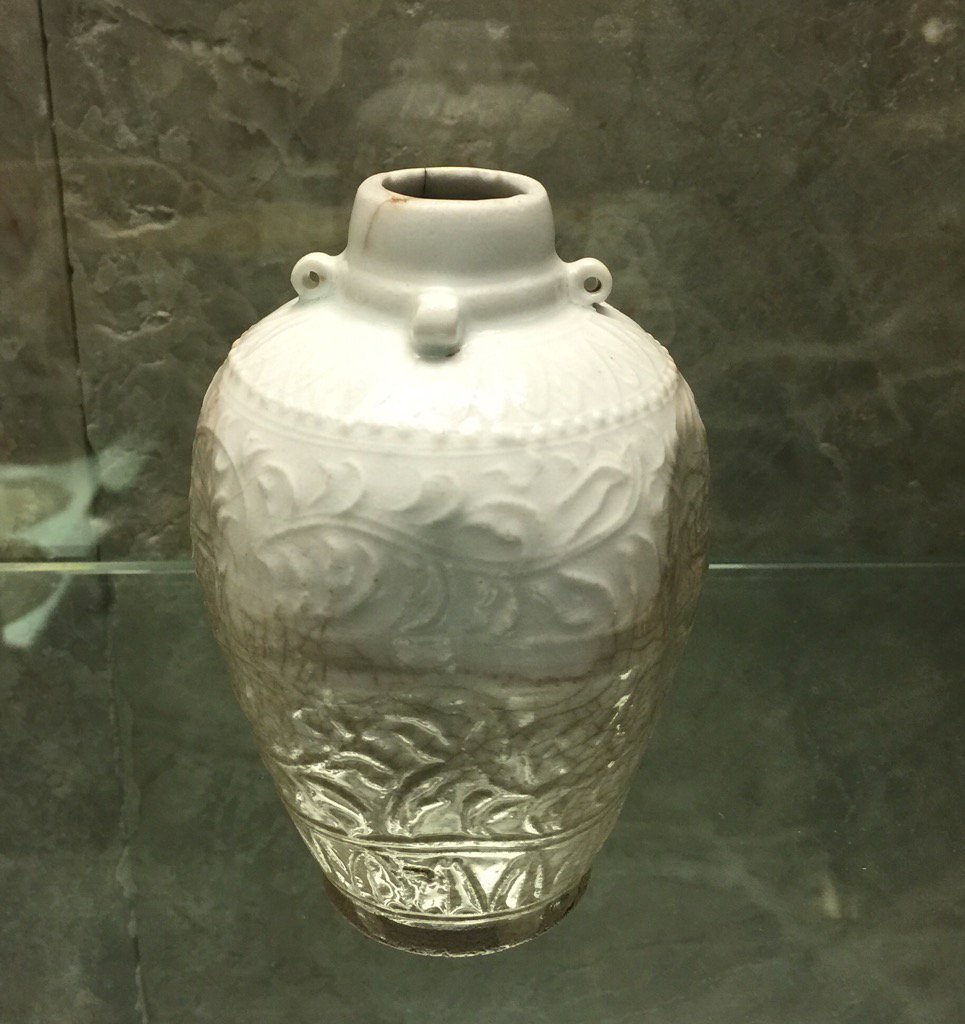 As Europeans looked for ways to produce the stuff on their own, “porcelain” also got used for local clays that resembled baidunzi or kaolin (obsolete now); porcelain-like fragility; and, for obvious marketing reasons, the close-enough soft-paste and bone-china imitations of true Chinese porcelain.

Once the English got to China themselves in the 1600s, their ships came back advertising “Cheney ware” and “rich Pieces of China”. China ware then became china; then also got used to describe the inferior grades developed in Europe; and then (via Cockney rhyming slang) used as a slang term for “friend”.

The minor differences that remain,

aside from those slang or figurative senses, have to do with associations and specificity. “Porcelain” can mean “a porcelain object” but it’s much more commonly used in the plural to describe porcelain art objects (e.g.); “china” is the much more common term for a family’s fine dinnerware; but a store selling fine porcelains is a “china shop.” They proverbially suffer from bull infestations, but people with a glass jaw are “porcelain” not “china,” but toys that look like those people are “china dolls,” although they're made of “fine porcelain.” All of that’s just down to associations people have built up over time. Similarly, many families’ dinnerware is low quality china, stoneware, or simple pottery, so “porcelain” is the preferred technical term for the material, even though its lower grade is known as “bone china.” Likewise, since china is so associated with dishware, people vomiting or otherwise using a vitrified ceramic toilet are interacting with the “porcelain goddess,” “porcelain bus,” &c. Porcelain or vitreous enamel is a whole other thing and vitreous china is a separate thing from that.

So it’s a bit of a mess but the tl;dr is pretty much what we started with: porcelain is the ceramic substance, the dishware is china, the art pieces are porcelains, and china’s also the substance, but now in a more informal and usually dishware-related context.

The word porcelain is often defined as "vitreous china", which suggests that it is a subset of 'china' generally. Vitreous means glassy, and if you break vitreous china, it is glass-like all the way through, it does not have a grain to it. China, generally refers to pottery ware that is not glassy, it has a sandy or finer textured grain when you break it.

Porcelain is therefore impervious to liquids and does not require a glaze, while china is not impervious and must be glazed to be used to serve food.

Toilets can be made from either, but the vitreous variety is more durable.