I'm trying to find the correct noun for a u-shaped bend in an electrical component's pin. Is there a generic technical term that may usually refer to a deformation to reinforce e.g. an (angle) bracket made of sheet metal, where the 90° bend has been given a groove?

If you provided a few sentences using potential synonyms I would be grateful.

For component leads, the rather generic terms lead forming and formed leads are often used. As an example, some thermistors are supplied with an offset jog referred to as formed leads. A second jog could give the U-shape you mention, which I think is somewhat as in first photo below. The other picture shows Excelta lead forming pliers. 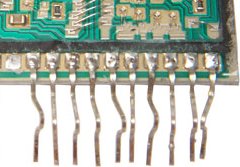 Edit: Note that besides the dog leg bends mentioned in my answer two weeks ago, some related terms include inclined gull-wing, spider J-bend, and spider gull-wing lead designs for surface mount components, and omega bends and camel humps for surface mount quad packs and flat packs as in picture below. 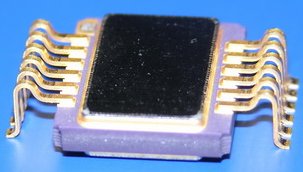 Technically I think its dog leg, but very often referred to as a knee, which can be any forming that shows the depth of insertion of the lead to a hole or pad. Could also be referred to as a crimp in the leg.

Not the answer you're looking for? Browse other questions tagged nouns technical shapes or ask your own question.

6
Noun for “receive”?
5
Noun for “act of striving”
6
Noun for “send”?
1
What is the noun for “encoding”?
0
name for slot that clamps a pushed-in soldered wire?
1
Noun for 'late comings'
1
Noun for silent greeting