When should I use "a" versus "an" in front of a word beginning with the letter h?

A basic grammar rule is to use an instead of a before a vowel sound. Given that historic is not pronounced with a silent h, I use “a historic”. Is this correct? What about heroic? Should be “It was a heroic act” or “It was an heroic act”?

Personally, I pronounce the h, and believe that a is correct. I find that it sounds incorrect to use an and pronounce heroic without the h.

So how do I know when to use a and when to use an with a word beginning with the letter h? Are both acceptable or is there one that is correct?

Indeed, you are correct.

In certain accents, history, hotel, etc. are pronounced with an h sound. In those accents, a should be used. In other accents, such as my own, it is pronounced without an h sound, and therefore starts with a vowel. In that accent, it would be correct for one to say an.

In writing, it doesn't really matter which one is used.

The point of the word an is to avoid the awkward silent pause between words when saying something like "a apple." So, you should put an before any word that begins with a vowel sound, not just a vowel letter.

The good news is that you just need to do whatever makes sense when talking:

Google books ngram viewer for "a historic" and "an historic" 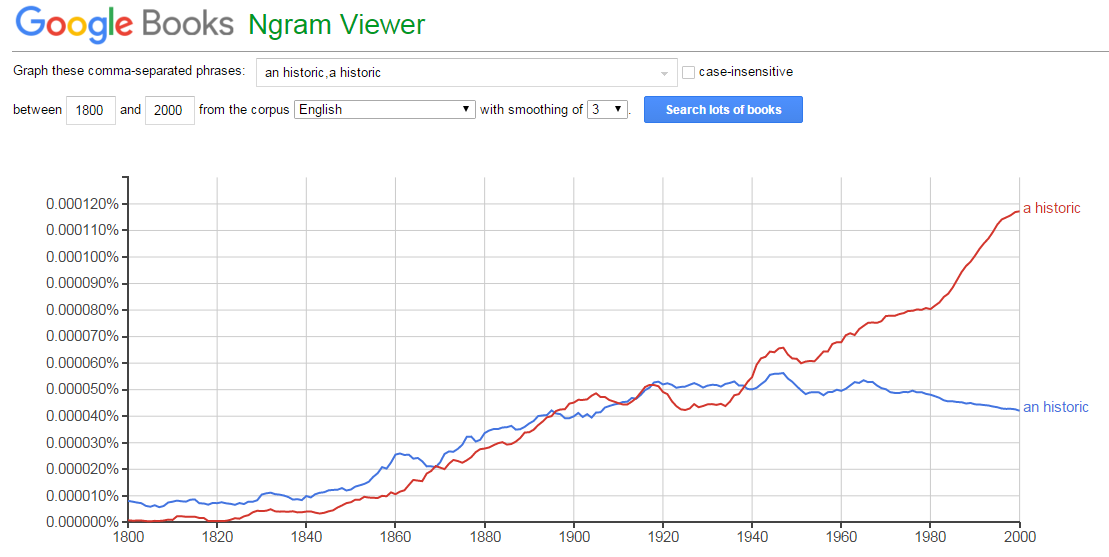 In words beginning with “h” where the accent is on the 2nd syllable, it is also correct to use "an". In such cases you do not pronounce the “h”.

This practice has a long, respected pedigree, at least in British literature.

It's pretty hard to decide who is "correct". I can offer the example of someone like newsreader Jeremy Paxman who decidedly says "an historic" with an aspirated "h". There are also lots more television announcers who do this in the UK. It strikes me as being an example of hypercorrectness similar to blanket-removal of linking-r sounds.

See this question/answer: When should I use "a" vs "an"?

The question of "a" vs "an" is always decided by the pronunciation of the word that follows the article. Thus, various geographical regions that have different pronunciation rules may use a different article for the same word."

I use "an" before a word which I think would start with a vowel in the speech of whoever I'm talking to. For instance, I ordinarily say "an" before "historical", because although I always pronounce "h" at the beginning of "historical", I believe that many people don't pronounce an "h" here. I just want to get along.

The choice of article is based on pronunciation, not spelling, so for instance "an honor". There are some dialects in which the h in "historical" is silent, and for those dialects, "an historical" is correct.

You ask why some people say or write an historical. The thing is, that's not what any people actually say or write. People who uses the string an historical is going have a noun after it. E.g, novel:

And you will also notice that the syllable with his in it is not stressed, and that there is a strong tendency to leave out the /h/ when saying it, producing something that might be pronounced

if one had the simple faith in apostrophes that millions display daily.

A linguist would say (and this linguist does say) that initial /h/ is frequently dropped before unstressed syllables. Stressed initial syllables are more normal in English than unstressed, and so they don't drop /h/; these include all monosyllables like ham and hint, for instance.

This is not a rule that has to be followed; this is an optional rule that is followed by many people, but not by all, often, but not always, even by the same people. So sometimes people say "an historical", because 'istorical starts with a vowel in speech, and the rule says an before vowels when they're pronounced as vowels in speech, never mind spelling. So in those cases they'll write it an historical, too, because it's a speech rule, not a spelling rule.

In older texts, it is more common to have "an" in places where contemporary usage favors "a". Psalm 84:3 (Protestant versification) talks about the sparrow finding "an house" in the Jewish temple.

My rule of thumb (which I can't prove/cite, but which I'm sure is correct) is to use an for any word that sounds like it begins with a vowel. Both "a history" and "a historian" begin with an H sound. If you slur it into 'istorian, then I would use "an" in spoken sentences (but as that's an incorrect pronunciation anyway you should definitely write it as "a historian."

An or a, that is the question. I find that if I don't think about it I automatically say the word with whichever article sounds best. The hard bit is micro-analyzing it. (P.S. I also automatically write it in whichever way sounds best as I 'speak' it in my head). There is no clearly defined 'correct' answer as history and geographical location / accents mean the goal-post keep moving.

Not the answer you're looking for? Browse other questions tagged grammaticality pronunciation indefinite-articles silent-letters or ask your own question.

19
When is it appropriate to use the original pronunciation of a foreign word versus the English pronunciation?
3
Pronunciation of "lorry", "worry" and "sorry"
6
What syllable is stressed in "complex"?
3
Is there a rule for the position of the accent (stressed sound) in words ending with -ative?
9
Pronunciation Rule for "nt" in the Middle of Words
5
Do we pronounce the vowel at the beginning of the word with a preceding glottal stop?