Why is 1 hand-written without a serif and 7 without a dash? [closed]

I've noticed that people coming from English-speaking countries tend to write "1" without the upstroke and "7" without a dash: 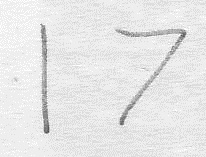 which differs from the way the numbers are usually written in continental Europe1: 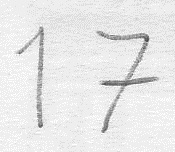 Is there any particular (historical?) reason for this?

1 According to Wikipedia, "most people in Continental Europe, Latin America, and New England write 7 with a line in the middle ("7"), sometimes with the top line crooked."

Many of us in the U.S. learned the Palmer Method of handwriting, which has a straight numeral one and no dash on the seven. See numerals at bottom right:

When I took engineering drafting in college, though, I was taught to put a slash through the seven (as in your photo) to distinguish it from the one, and still do so. So some people trained in certain fields probably do use the seven with the dash. I'm not sure about why Palmer chose these shapes for his numerals, though. I would refer you to the Wikipedia entry on the Palmer Method of Penmanship.

From the evolution of the glyph section of the Wikipedia entry for '7':

As is the case with the European glyph, the Cham and Khmer glyph for 7 also evolved to look like their glyph for 1, though in a different way, so they were also concerned with making their 7 more different. For the Khmer this often involved adding a horizontal line above the glyph. This is analogous to the horizontal stroke through the middle that is sometimes used in handwriting in the Western world but which is almost never used in computer fonts.

It goes on to say this regarding usage of the horizontal line:

Most people in Continental Europe, Latin America, and New England[citation needed] write 7 with a line in the middle ("7"), sometimes with the top line crooked. The line through the middle is useful to clearly differentiate the character from the number one, as these can appear similar when written in certain styles of handwriting. This glyph is used in official handwriting rules for primary school in Russia, Ukraine, Romania and other Slavic countries.

Not the answer you're looking for? Browse other questions tagged numbers typography handwriting or ask your own question.

25
Why are numbers usually written twice in contracts?
76
Why do eleven and twelve get unique words and not end in “-teen”?
13
Why is “de facto” often written in italic?
0
When are Roman Numeral suffixes appropriate for number abbreviations?
1
Correct way of linking arabic numerals and their written-out variants (in official documents)*
3
What is the category/group for the typographical terms serif and sans-serif
28
Why are two-digit numbers in Jonathan Swift's “Gulliver's Travels” (1726) written in “German style”?