I have seen the phrase '"Hot" Corned Beef' on several convenience store signs in my area. Since corned beef is is usually served warm or hot, am I missing part of the meaning of the sign?

It is really a shot in the dark, but your area wouldn't be related with "Broadway" by any chance?

For instance, this blog post describes a restaurant called "Eat on Broadway" (on Broadway avenue, but not at all in New-York), with a sign including:

That could be a reference to their specialty, as in: 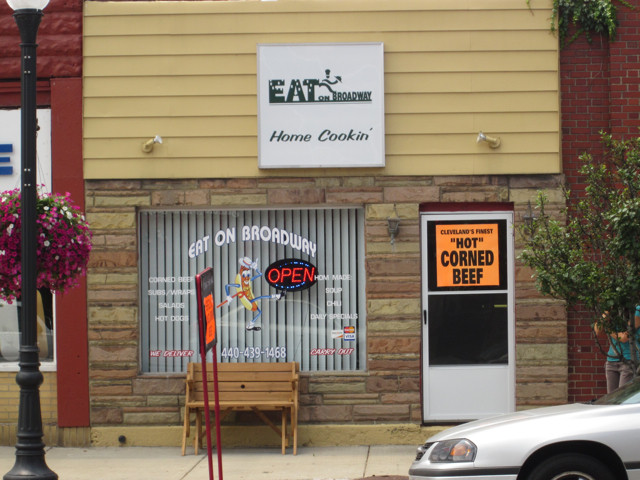 Don't rely on signs you see in windows as a usage guide. In standard English, quotes around a word are usually used to distance the writer from its use in some way, normally to cite their usage by someone else or to express doubt about their veracity.

"Fred called it 'the best restaurant in New York,' but I've never been there so I can't confirm that."

Here the writer is quoting Fred, and emphasizing that this is Fred's opinion, not his own. For all he knows, Fred is correct, but he has no direct knowledge of the matter in question.

"Fred called it 'the best restaurant in New York,' but this is from someone who eats at Wendy's every day."

Here the writer is quoting Fred and contradicting Fred's assertion.

The sign's creator is most likely using (or misusing) the quotes to emphasize the word, and to lead you to believe that the corned beef is genuinely hot (probably in the sense of temperature, as corned beef sandwiches can be served either hot or cold). He or she would have done better to underline the word, or render it in a different color, or use a little more ink and boldface it.

I remember seeing a sign on an ice machine at a cheap motel that said:

"Thanks" for not loosing the scoop!

I presume the writer meant "losing" instead of "loosing"; but the quotes around the first word gave the impression that the thanks were insincere.

In sum, when you see quotes around a word in a sign, it is a fair guess that the writer believes he or she is using them for emphasis. But don't look to signs for English usage lessons.

Not the answer you're looking for? Browse other questions tagged differences signage or ask your own question.

11
"Unexpected" quotation marks: Why?
0
What does adding quotes to an expression do to its meaning?