What is meant by "steep learning curve"?

In informal usage, a "steep learning curve" means something that is difficult (and takes much effort) to learn. It seems that people are thinking of something like climbing a steep curve (mountain) — it's difficult and takes effort.

As it is technically used, however, a learning curve is not anything to be climbed, and is simply a graph plotting learning versus time. Thus, a steep learning curve would look like this (excuse the poor drawing): 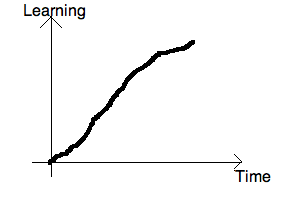 One natural interpretation of such a curve, which was the predominant early usage (according to Wikipedia) and still exists in some technical circles, is that the thing being learnt is easy — a great amount of learning happens in a small amount of time. This is the opposite of the popular usage. Now there is also apparently an interpretation of the same curve in the negative sense — probably something about a large amount of learning existing, or that one never stops learning and keeps learning, but I'm not sure I understand how that's negative.

The popular meaning of "steep learning curve" is "difficult to learn"; the technical meaning is "quick to learn".

[Edit, ten years later]: I just noticed a post from February 8, 2013, by the linguist Ben Zimmer, which identifies the 1970s as when the popular usage developed. The post (also available here) gives two examples each from that decade of the word being used in public in the technical sense and in the currently popular sense (bolding added by me):

Looking through examples of the expression from the '70s, one can find both positive and negative senses. For instance, an article in the Spring 1973 issue of Sloan Management Review about the computer industry includes this line: "Due to economies of scale and a very steep learning curve, the cost of such circuits has dropped by a factor of ten in a little over one year." An article in the February 11, 1979 edition of the Boston Globe about Texas Instruments says that "part of TI's success in having a steeper learning curve — and lower product costs when produced in mass — has been its 'design to cost' system." In both examples, a steep learning curve is a good thing, from the perspective of a business ramping up productivity and trying to keep costs low.

But the phrase was also being used by individuals describing a learning process more subjectively, and in those cases the sense became more negative, with steepness equated with difficulty. Thus, for instance, in December 1978, the newly appointed chairman of NBC, Jane Cahill Pfeiffer, told the New York Times, "I'm on a very steep learning curve, and the bulk of Fred [Silverman]'s experience is not where mine is." The following month, in January 1979, Lord Kearton, chairman of the British National Oil Corporation, had this to say to The Guardian: "Everybody in the North Sea is on a very steep learning curve. What worries us is the prospect of new people coming in with practically no resources of any scale, who will have to start more or less at the bottom of this curve."

It was uses like these (notably both from titans of industry) that helped popularize the notion that a steep learning curve was an arduous and not an easy process.

Steep learning curve means there's a lot of facts to pick up right at the beginning. 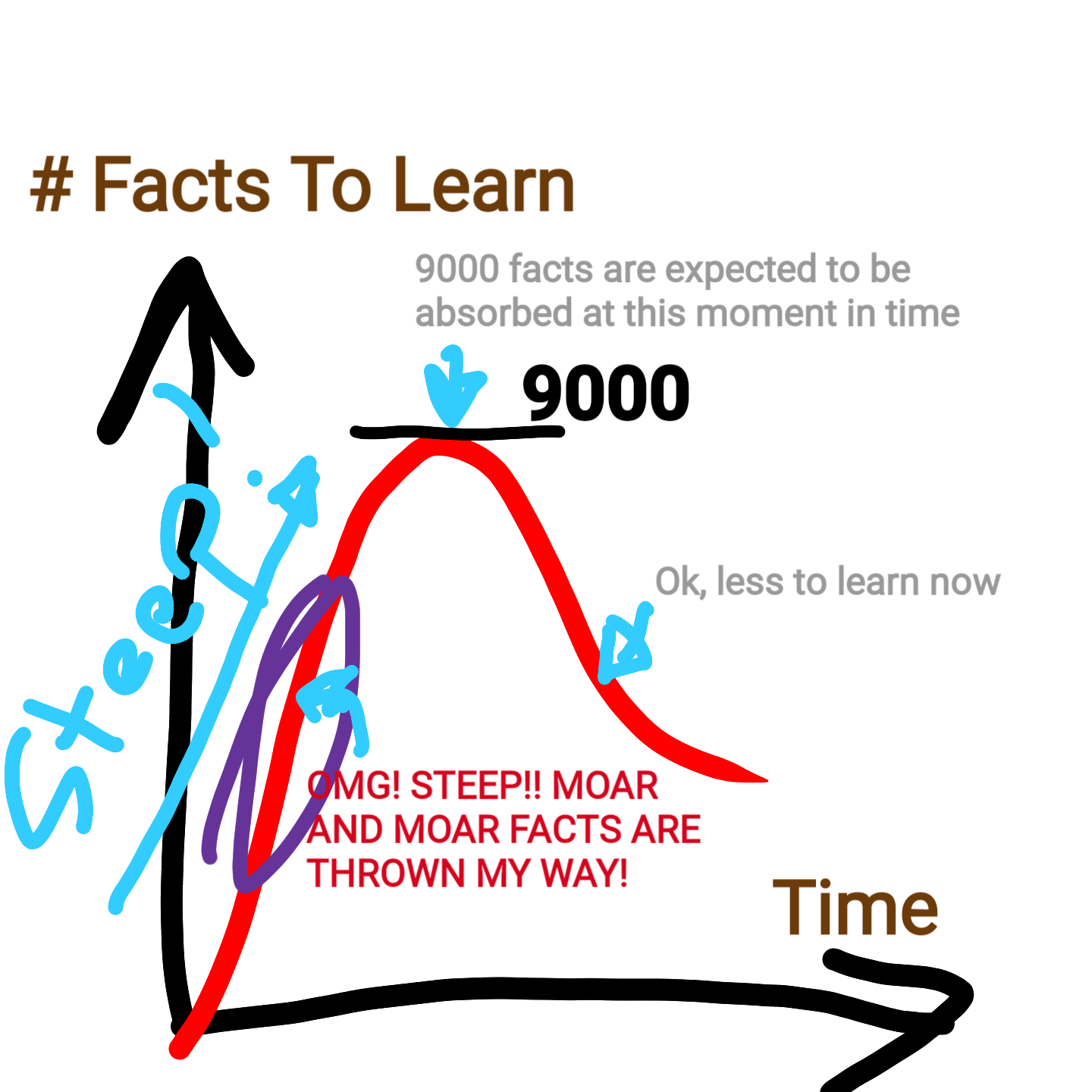 This phrase has a scientific basis (Wikipedia has information on its origin and scientific usage), but is most commonly used to indicate that something is difficult to learn. It refers to a person’s rate of progress in learning a new skill as it might be plotted on a graph. In this case it sounds like the computer program itself is difficult for beginners to use effectively, not that it is not good at learning. I have never heard the phrase used that way, though I suppose it could apply to a program that uses artificial intelligence.

47
Is there another way of saying 'user-unfriendly'?
29
What's the opposite for "steep learning curve"?
20
Why do we say "lowest common denominator" when we mean "greatest common divisor"?
2
Is it correct to say "The learning curve has always been uphill"?
-2
What's the meaning of "scrambled up"?

33
What does "great good" mean in the tutorial title "Learn You a Haskell for Great Good!"?
4
What does "undoable" mean?
1
Meaning of "as ... as any ... someone had ever done"
2
Better word for "critical mass"
2
What is 'understanding' involving learning?
1
What does "program to" mean in "Program to an interface, not an implementation"?
6
What is the difference between antonyms and negations?