'To' vs 'in order to' in negative clauses

The answers to this related question suggest that to and in order to are pretty much interchangeable, the former being preferred in informal contexts. My question is about negative clauses.

According to the answers to the linked questions, the following two sentences are fine and mean the same thing:

We were speaking loudly to wake up Mr.Smith.

We were speaking loudly in order to wake up Mr.Smith.

Can the same be said about the following sentences?

We were speaking quietly not to wake up Mr. Smith.

We were speaking quietly in order not to wake up Mr. Smith.

I am asking because when I used the first variant a friend of mine corrected me and said that I must use either in order or so as to make the sentence grammatical.

It's true that so as not to and in order not to are much preferred among the majority of English speakers. I couldn't (without some deliberation) go so far as to say that not to is ungrammatical, but it sounds wrong to me, i.e. not fine.

As to why it's not consistent from a positive context to a negative: that's a good question, and even a broad site like Wikipedia doesn't address it:

It can be used like an adjective or adverb, expressing purpose or intent. So, "The letter says I'm to wait outside", or "He is the man to talk to", or "[In order] to meditate, one must free one's mind."

I googled infinitive purpose negative and came up with pages like this and this, which say essentially that we use so as not to or in order not to, rather than just not to, without explaining why: 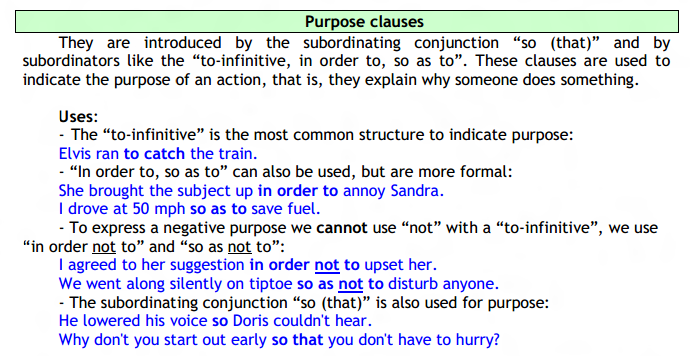 I think this is a case of taking analysis of minutiae a little too far. In the words of the Bard...

Presumably no-one thinks Shakespeare should have written "...not in order to praise him".

It's simply that we usually do things for a reason. Even if we're doing something to avoid a consequence, we still tend to phrase it without negation (as in this sentence). Thus, in the (slightly) unusual construction where the reason for the action is expressed in the negative, the addition of "so as to" or "in order to" makes it easier to understand without jumping through mental hoops.

I'm not a native speaker, but I personally believe that if people find the "not to..." form as wrong or unsuitable or awkward or whatever when it is intended to mean "in order to," then it might be because of the following:

And that is precisely why some people seem to be beginning to use the "not to..." form to mean "in order not to," as in "I hurried not to be late."

That's what I think. Am I wrong?

The problem is not in the choice of words. It is rather in the construction of both of these sentences, which are lacking a simple comma, as using the adverb not at the beginning of the sentence modifier seems to form a conditional clause.

You may have noticed that the adverb clause of condition gives the circumstances under which the action in the main clause will take place.

Both sentences are phrased with the main clause and additional adverb clauses, which would have been better constructed this way:

In order is really a little superfluous, but that's just a question of style preference. However the placement of not at the end of the main clause, especially in the absence of a comma for separating the clauses, creates some confusion because in order to make sense it should be paired with the infinitive phrase in your adverb clause (i.e. not to wake).

Dropping it right in the middle of the sentence between the main verb and the infinitive phrase within the adverb clause, without punctuation, might make the audience wonder which clause and which verb it was intended to modify. So it's understandable that your friend insisted on using another phrase, in order, in an attempt to form some sort of logical separation between the clauses of the sentence.

Ironically, a simple comma should have been sufficient.

Yet the sentence could also be improved with a different placement and usage of the adverb not modifying wake, without the comma:

To wake, or to not wake, that is the question. It is not a split infinitive, when to is being used as a preposition. And the comma isn't necessary to separate the prepositional phrase following the main clause.

Word Origin and History for to

preposition: Old English to "in the direction of, for the purpose of, furthermore," from West Germanic *to (cf. Old Saxon and Old Frisian to, Dutch too, Old High German zuo, German zu "to"), from PIE pronomial base *do- "to, toward, upward" (cf. Latin donec "as long as," Old Church Slavonic do "as far as, to," Greek suffix -de "to, toward," Old Irish do, Lithuanian da-).

The nearly universal use of to with infinitives ( to sleep, to dream, etc.) arose in Middle English out of the Old English dative use of to, and it helped drive out the Old English inflectional endings (though in this use to itself is a mere sign, without meaning).

Not the answer you're looking for? Browse other questions tagged grammaticality negation infinitives in-order-to or ask your own question.

62
When is a gerund supposed to be preceded by a possessive adjective/determiner?
60
Order of “not” with infinitive
5
Double negation and litotes
2
in order to [gerund] or [infinitive]?
5
If I was an airline pilot vs. If I had been an airline pilot 10 years ago
9
“in order that” vs “in order to”
5
The grammar behind 'above mentioned'
0
When “why would …” becomes an embedded clause, should word order be changed?
0
Punctuating lists containing negative elements