What does “Mitt Romney pretends to be a Nascar, cheesy-grits guy” mean?

In New York Times (March 17) article titled, “Is Elvis a Mormon?” Maureen Dowd criticizes Mitt Romney as his manner being so “inauthentic.” She says:

“Mitt works overtime pretending he’s a Nascar, cheesy-grits guy and masking his pride in his bank account and faith.”

To me, Nascar is the abbreviation of the National Association for Stock Car Auto Racing. Does this mean he enjoys car racing as a racing driver?

As for cheesy –grits, www.mrfoodcom defines it as “a recipe for classic down-home cheese grits is chock-full of sharp Cheddar cheese.”

What does Mitt Romney pretends to be a Nascar, cheesy-grits guy? What do “a Nascar” and “Cheesy-grits” symbolize? Is Dowd trying to say Romney wants to be seen by voters, just as a commonplace person and a docile husband, not a plutocratic politician? 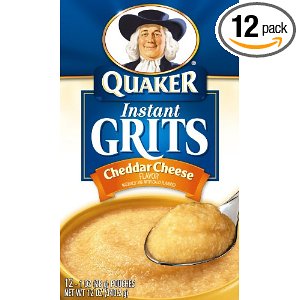 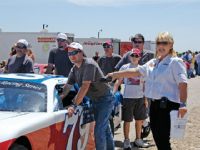 ...apparently that's what them good ole boys down in Texas eat when they get back from an afternoon at the stock car racing. Mitt Romney - just an ordinary guy like all the voters (except he has a bit more money than most of them!)

EDIT: The question has arisen in comments as to exactly how Dowd's phrasing represents stereotyping. I'm a Brit who's never been to a stock car race or eaten "grits" - or even heard of NASCAR and "cheesy grits" before. Nevertheless, I grasped the sense immediately.

To my mind that makes it axiomatically a "stereotype", even if the specific referents used to invoke it are unknown to me (and probably never used in that conjunction before by any other writer in history). It's true Romney recently went to a stock car racing event (he fluffed that by saying his interest in the sport was proven by the fact that one of his friends owned a racing team). And he recently claimed he liked eating "grits" (a dish strongly associated with poor Southerners, and about as likely as Bill Gates tucking into Pot Noodle/Cup o' Noodles every night).

As a "journalist/media pundit", Dowd wouldn't want her words open to being challenged on factual grounds, but the average reader doesn't need to know or care whether the specific allusions have any basis in Romney's recent activities. All that matters is we understand Dowd to be saying Romney falsely claims to be a stereotypical ordinary guy just like those whose votes he seeks.

Maureen Dowd is basically accusing Mitt of pandering to southern voters by pretending to like the same things they do: NASCAR and cheesy grits, both of which are stereotypically southern sorts of things.

Is Dowd trying to say Romney wants to be seen by voters, just as a commonplace person and a docile husband, not a plutocratic politician?

Well, I don't know about "docile husband," but yes, Dowd is saying that Romney is pretending to be an average guy, which is supposedly someone who watches Nascar races and eats grits. Both of these are references to recent events: just picking the first hits on Google for "romney nascar" and "romney grits" gives the Atlantic and the Boston Herald.

Essentially, Dowd is invoking a stereotype - one that she believes Romney would like to emulate, possibly to get more votes.

NASCAR, the auto racing sport you mention, experienced a surge in popularity about 10 years ago. Even though NASCAR fans can be found from all walks of life, the stereotypical NASCAR fan is "true red, white, and blue," meaning blue collar, and patriotic. It's considered a "redneck" sport, and has a relatively huge following in the south (which, incidentally, is where grits is a popular food staple).

On the surface, Romney is everything your cliché NASCAR fan is not: Romney is a wealthy Mormon from the North. In her remarks, Dowd is claiming that Romney is trying to bridge the gap between his elitist background, and that of the typical NASCAR fan, by pretending to have common interests - and she is doing so with very vivid, colloquial language.

Note to everyone: I'm going to stick with English, and stay out of politics. I'm not endorsing or criticizing Romney as a candidate, nor am I agreeing or disagreeing with Dowd's assessment. Most politicians don a veneer of some sort, and political columnists have criticized such politicians - rightly or wrongly - for generations. I'm only explaining what Dowd was trying to say, and I won't comment on the accuracy or inaccuracy of her appraisal.

This means Mitt Romney pretends to be a working-class guy. Watching NASCAR races and eating cheesy-grits are things associated with the American working class, particularly the working class of the American South.