“(sesame)” meaning in subtitles of “Sing”

What can “(sesame)” mean in subtitles of “Sing” (an animated movie)? It's the scene where sad Buster Moon is walking over his destroyed theater.

This moment (no words being said): 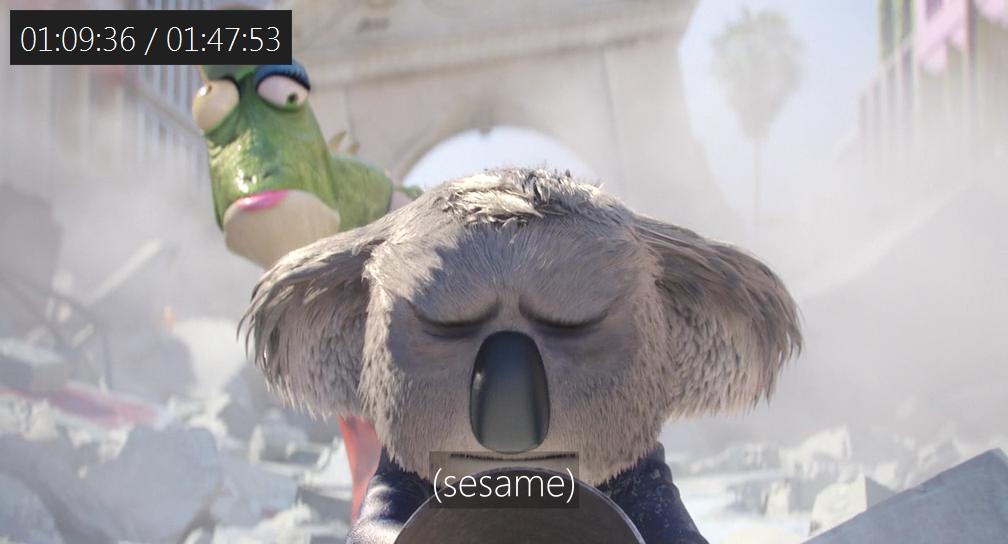 1 : a widely cultivated chiefly tropical or subtropical annual erect herb (Sesamum indicum of the family Pedaliaceae) also : its small seeds used especially as a source of oil and a flavoring agent

: something that unfailingly brings about a desired end

Since subtitles describe what's happening on the screen, I still can't get the idea.

Maybe, it's just a typo? Something like 'The same' or another phrase? If no one else sees no sense as myself, it's an answer too—at least, it's not anything I should understand.

It would be best if you could include some of the subtitles that use this term.

But here is a good explanation from Literature SE:

Most likely from the Hebrew word "סיסמה", which translates to "password".

The pronunciation of the word out loud is (approximately, going off information a native speaker told me) "seez-ma" or "sees-ma".

Now this provokes the question:

In the story, Ali Baba's brother became trapped in the cave and couldn't get out. He did try other grains though... If the phrase was originally something like "password" or "password for opening" (literally), why would he guess other grains?

However, it turns out that tale wasn't originally in The 1001 Nights. It was first seen in a French translation by Antoine Galland.

TL;DR: Galland claimed it's a Syrian tale, but it's most likely he made it up. It's not in the oldest version, plus the making-it-up explains the other grains.

If he made it up, it's most likely that "סיסמה" (seesma) became "sesame".

It needs to be noted, however, that the phonetic similarity to "sez-uh-me"/"says-me" has long been harnessed by writers (and jokesters) to add a little "spice" to dialogs. And the similarity to "see-same" is perhaps even more popular with jokesters.

4
Is "Most of the world does not distinguish captions from subtitles" true?
5
Sing Song - nursery poem definitions
13
"Stornry" Meaning
1
Meaning: I'm so happy that I can sing
0
what [sing.] means in a dictionary?
2
Why sing "tow, row, row, row, row, row" for the British Grenadiers?
4
She can't sing AND/ OR dance