Is 'gonna' anachronistic in Sweeney Todd?

In one song the boy sings "nothing's gonna harm you". This struck me as odd because I was under the impression that "gonna" was a primarily American slang that was adopted by the English much later. As Sondheim was an American composer and lyricist it's an understandable mistake for him to make. So I did a bit of research and found conflicting accounts of "gonna"s origin, but nothing that says whether "gonna" was in use in England at the time.

Wiktionary says it was around in 1917 (later than Sweeney Todd), but lists no location of origin.

Etymonline says gonna goes all the way back to 1800ish in Scotland. This makes sense to me because first, due to heavy immigration from Scotland to the US, there are many Scottish words preserved in America. But again, Sweeney Todd is set in England, not Scotland.

The dates I've been working with for Sweeney Todd being in London are 1846–47 based on when the original story (string of pearls) was written.

Does anyone have evidence whether gonna was in use in London at the time? Or is this anachronistic?

Sweeney Todd's usage of gonna is likely anachronistic. As your second source says, gonna dates to the 19th century, and initially appears in Scottish texts. Note the Oxford English Dictionary's first two sources for "gonna, v." are both in a Scottish dialect and use a distinct Scottish spelling ([a] or [au]):

In fact, if you did a careful search of 19th century texts on an engine like Google Books, carefully weeded out all the Italian references and the miscategorized texts, then you would likely only turn up a term borrowed from Italian, the gonna or skirt:

the other, in a plain linen Saxon tunic, and the gonna worn on state occasions, to which he seemed unfamiliar, but with heavy gold bracelets on his arms, long haired and bearded, was Vebba, the Kentish thegn, who had served as nuncius from Godwin to Edward. (Edward Bulwer Lytton, Lord Lytton's Novels, ~1850)

There is nothing in Dickens or other 19th century others I tried to suggest gonna was extant in Victorian dialogue.

Research into Going to and Gonna

Comments have indicated that pronunciation (e.g., /'ɡənə/) may precede gonna as a spelling and be present in the mid-19th century. I agree that, in general, pronunciation would logically precede the first instance in spelling. However, there is an absence of evidence that a pronunciation like /ɡənə/ was widespread in the 19th century.

One clue is when going to grew in popularity. As linguist Christian Mair (2004) points out, going to exploded in frequency at the turn of the 20th century, at which point gonna shows up in the frequency chart: 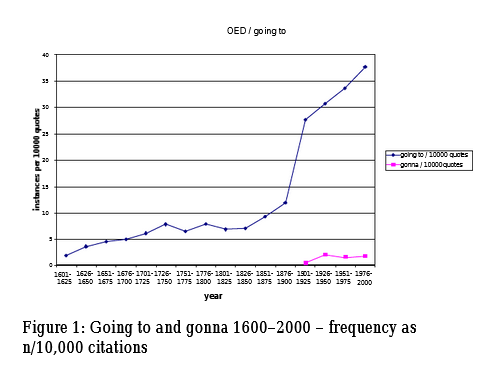 We might also ask what kind of reduction we would've seen in the mid 19th century, since several forms might be possible. David Lorenz (2012), in studying English semi-modals like gonna, makes the point that other reduced forms of going to appear before gonna in the Corpus of Historical American English (COHA) (p. 114-115). Lorenz cites goin to, gwine to, and gon to occurring in 19th century American English (1827, 1834, and 1886, respectively). These forms may be evidence of progressive reduction, or the idea that over time going to lost some of its phonemes to become gonna (p. 19): 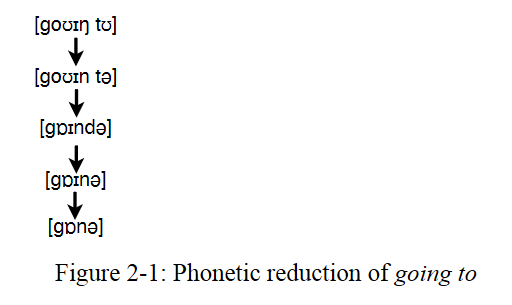 What might we hear in London in the mid-19th century? Maybe all of those! It's possible that the reduced sound most common in London dialects in the mid 19th century would have still had a /t/ or /d/ sound in some form or a less reduced vowel. It is also possible that the shift seen in Scottish English also appeared in London English. But it's all speculation. There isn't evidence to support or explicitly forbid the possibility of gonna.

4
Define "plate" from Sweeney Todd musical
15
What is the origin of "rat"?
6
Origin of the term "top tucker"
8
How did an egg and cheese dish come to be known as "Woodchuck(s)"?
8
Origin of "tan someone's hide" as in "I'm gonna tan your hide"
3
From "breath of life" to “rescue breath”
39
Etymology of *spreadsheet* / an anachronistic use
6
Was the Shark frightening to 16th / 17th-century English speakers?
26
Did Peter Piper steal a peck of American pickled peppers?
13
The eerie origin of "eerie"