Word for the distantness of the world when wearing glasses

I wear glasses and strength-adjusted sunglasses. Have been doing so for ten years. Recently, while on vacation in various foreign cities, I noticed a peculiar psychological effect: when I would take off my (sun)glasses while walking in the street, I felt this strong sense of becoming "grounded" in my environment, whereas with glasses on, there seemed to be some kind of mental barrier that reduced my overall perception -- paradoxically, obviously, because I need glasses to visually navigate anywhere that isn't my house.

My brother has even stronger glasses, and he confirmed having the same experience after I told him about what I experienced when taking off my glasses. He has since described it as if wearing glasses "makes sight feel like a video" or "the effect of looking through a window".

Is there a suitable word that describes how reality becomes more distant when (e.g.) wearing glasses?

Wearing glasses places the wearer at a remove from the world around them.

remove, n.: 2b: a degree distant (as in derivation or relationship) : a grade or stage of separation from the immediate or direct : a step apart or away

Your experience of the world may be said to be "mediated" by the glasses. The American Psychological Association defines "mediate experience" thus:

There's an expression or idiom that literally uses the word "glass."

There's also a version that uses "behind bulletproof glass" for extreme cases where the illusion of togetherness disguises an utter and absolute untouchability, especially in an emotional sense but not necessarily as it could just as well refer to a physical sense, like overprotective parents who never let their child have any friends, do anything adventurous, or really go anywhere in hopes of keeping their child from any possible harm (physical, emotional, etc.) that could befall them might be gossiped about as keeping their child "behind bulletproof glass."

"When I took my sunglasses off, I suddenly realized I'd been keeping myself behind a glass wall, literally, but now, having come out from behind that glass wall, I felt one with Prague, a part of her."

There is no way to put pictures in comments so please forgive me for writing here not as an answer but as a possible pictorial explanation for the way you feel and as a complement to another answer that suggests "remove".

The correction for short sight is to use a concave lens (coloured green below). Each side of the lens bends incoming light as shown by the red rays. So the eye (bottom of picture), which would normally see out between the straight blue rays, now sees out within the red rays. Consequently the flowers, which normally occupy a third of the field of view , now occupy very much less of the field. So they appear smaller, more remote, removed from you, a smaller part of the whole field of view between the red rays.

Does this accord with what you feel? 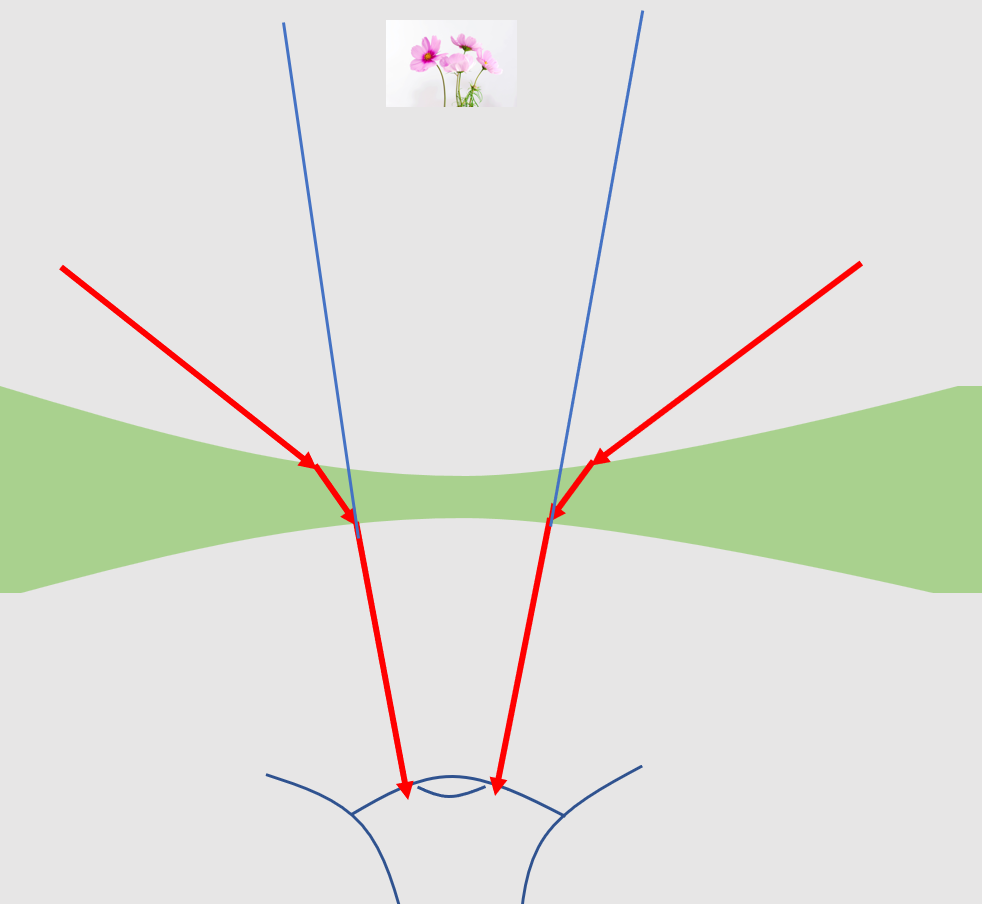 Not the answer you're looking for? Browse other questions tagged single-word-requests psychology or ask your own question.

2
A word for “inner protected world”
7
The word or term for inserting the wrong word into conversation
1
A word or phrase for when something gets reported in the news and then similar stories follow
2
A word for stretching out the facts just so they fit a theory?
0
Word for confusing one emotion for another
0
A word for "good state of the world"
0
Word for geopolitical division of the world
1
As if looking at distance (to get high-level perspective)