Closest equivalent to the Chinese jocular use of 职业病 (occupational disease): job creates habits that manifest inappropriately outside work

But there is also a humorous use of the expression, which describes how a person's job creates habits that manifest outside work, usually inappropriately.

David is a taxi driver. Sometimes when he is off-work driving his private car, he sees someone standing on the side of the road and, without thinking, he slows down and starts pulling over towards the person. Then he realizes that he's not on the job, does a face palm and says to himself, "职业病!".

Jane is a flight attendant. Her job involves the use of a lot of detailed checklists (for safety equipment, boarding procedures, meal apparatus, etc.). At home, her young son would often forget to bring this or that to school, so she made a professional-looking, over-the-top checklist and posted it next to the door. Visitors are always amused by the checklist; she explains it as a case of "职业病".

What is the closest equivalent of this expression in English? (It doesn't have to be one word.)

The most straightforwardly similar term is "occupational hazard", which is frequently used this way (in my experience).

Bruce Sterling writes in his book "The Hacker Crackdown":

Besides, science fiction people are used to being misinterpreted.  Science fiction is a colorful, disreputable, slipshod occupation, full of unlikely oddballs, which, of course, is why we like it.  Weirdness can be an occupational hazard in our field.  People who wear Halloween costumes are sometimes mistaken for monsters.

In "The Geometry of Ecological Interactions" we have:

If the "occupational hazard" of being a field ecologist is thinking that everything is important and therefore must be included, the occupational hazard of theoreticians is building general, abstract models without a clear goal other than exploring the dynamics of the model itself.

From Emily Richards' "Somewhere between Luck and Trust":

There’s a phrase.” She tried to recall it and couldn’t. “Occupational...” “Hazard?” Analiese supplied. “That’s the one. Assuming somebody’s lying. Is that an occupational hazard of being a minister?” Analiese looked as if she was trying not to smile. “My occupational hazard is trying to read people’s minds, to see if they need help telling more of the truth. I have a feeling you have things buried deep inside you that you can’t share with anybody yet. Things eating at you.

From The Herald (Scotland),

In Captain America: Civil War, Tony Stark overreacts to someone removing something from their purse, and then to explain his overreaction he says "Sorry, it's an occupational hazard."

In English, in a conversation, we can say "Sorry, work habit" followed by a sheepish smile or "(It's) just a work habit". It's difficult to find written usages as it is mainly conversational. The phrase occupational habit is used also, instead of work habit.

Here is a written example I've found in a story:

"I know exactly who you are," he paused and I couldn't help but hold my breath under his arresting gaze. "You're... a psychotherapist."

My chest deflated in a long relieved sigh as my shoulders slumped.

"You're right," I gave a nervous chuckle. "You got me. Guilty!" I raised my hands to my sides.

"This is why you asked me about my time in college," his eyes refused to look away from mine. "You're analyzing me."

"It's just a work habit, you know? Can't seem to shake it off," I shrugged nonchalantly, fidgeting with my straw.

I have encountered the expression professional reflex referring to the situation you describe. E.g.

The White Tiger is a story of servitude, resentment and love – and what its hero calls “the contented smile that comes to the lips of a servant who has done his duty by his master”. He does a lot of smiling in this film, but this is about something other than contentment. It is a professional reflex and a personal holding pattern, a blank grin kept in place while the servant decides if he in fact hates his master, and while he also decides if he might somehow one day be the master himself. (The Guardian, film review)

Perhaps it's a professional reflex, but it seemed to me to be the equivalent of a person posting -as an April Fool's joke - that they had just suffered a heart attack, were on life-support, and might not make it. (source)

However, there is also the concept of professional deformation which is the English version of déformation professionnelle. About this term, Wikipedia says:

Déformation professionnelle (French: professional deformation or job conditioning) is a tendency to look at things from the point of view of one's own profession or special expertise, rather than from a broader or humane perspective. It is often translated as professional deformation, though French déformation can also be translated as "distortion". The implication is that professional training, and its related socialization, often result in a distortion of the way one views the world. The Nobel laureate Alexis Carrel has observed that "every specialist, owing to a well-known professional bias, believes that he understands the entire human being, while in reality he only grasps a tiny part of him."

It is interesting to note that

"Déformation professionnelle" was used in 19th-century medicine to describe a bodily deformity caused by one's occupation.

Just as your Chinese term, I suppose one could use this expression to mean that you do something out of a habit that was instilled in you by your profession.

We sometimes refer to “bringing our work home”. In this usage, it refers more to the behaviour than to actual work done for the employer. Here is an example from cartoon stock: 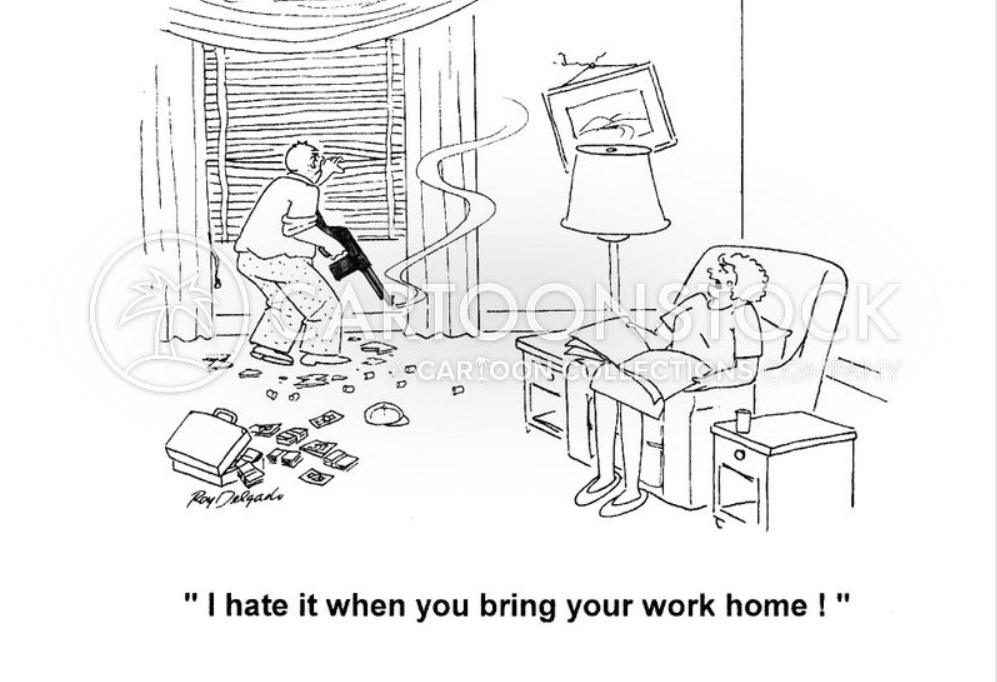 Work on the brain

Depending on your context the idiom "On the brain" is sometimes used as part of an apology when you have a freudian slip.
"Anyway the crust of the matter is.. hang-on, did I say crust? I meant Crux. I must have pizza on the brain"

You might similarly say refer to having Work "on-the-brain" when you slip into technical jargon at home.

I have always used the term Force of Habit.
Lexico has a good definition:

The tendency for something done very frequently to become automatic.
"he checks his appearance out of force of habit"

It doesn't specifically refer to a work habit; however, most of or time is spent doing work tasks, so this applies.
TBH: It could also be a habit from a previous job, or a learned task, etc.

bing : adverb : also, side by side, simultaneously. conjunction : and. verb : combine, incorporate, merge

That the word bing somehow got translated to 'disease' is the problem, and the thinking that a hazard is always bad. Because fill in the blank after the word occupational has only one answer : hazard.

'If the only tool you have is a hammer, you tend to see every problem as a nail.'

Not the answer you're looking for? Browse other questions tagged phrase-requests translation colloquialisms humor chinese or ask your own question.