Words suggestion for something not quite sure

This is for an academic paper. I would like to ask for some word suggestions.

Assume that I have a graph like this and I add some words as markers there.

I mark some lines as 'Ref[1]' or 'Ref[3]' to refer to some works that have been done before and listed in the reference part.

The one marked with 'new' refers to something new which I just discovered and I highly believe that no one has found it before.

Now for works related to the cyan color, I tried to search if anyone has done that before but I couldn't find any.

However, I'm also not confident to say it's new as I think probably someone discovered it and published somewhere, just that I cannot search for it.

So do you have any idea what word should I use to mark it?

'new' is a bit too much as it probably has been discovered before, just that I don't know so I want some words that work even if someone found it in some previous work or it's new. Also it should be a word or phrase not a sentence or too long. 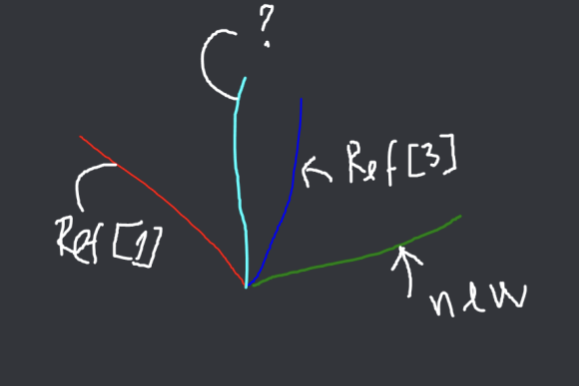 For the uncertain cyan plot, you could use labels such as

or other synonyms. If someone might have already found it, perhaps

In a paper you would describe the item with its appropriate name, cyan-2 or with a subscript 2. You use this description, a mundane name in the derivation of the thing, the description of the discovery. Once you have done that then you describe how you, the researcher, have yet to find an example of it and believe that it is new. You would not use a word, like "discovery" for example, to refer to it as you derive or describe it. Once it is fully described you then tell what efforts you have made to find it and so why you think it is new.

Your color map here may be more of an abstraction but the same idea would apply. Your discovery needs an ordinary name to go by. Even "proposed" would be fine.

4
What are some words for something that is not organised?
1
Less colloquial term for "zoom in"
0
Looking for a word referring to someone who says/tells something/to someone else
3
Word for being aware of something but not doing anything about it?
2
Word describing an outdated and no longer updated software package
2
Single-word for a 'middle-ish' amount? Something between 'modicum' and 'plethora'
3
Word for not just taking credit for someone else's work, but believing that you're also the hero
2
Is there a single word that has the same meaning as "As far as I know"?
1
Is there a word for the bias of not knowing what came before?