Why is "hammock" spelled the way it is?

It could have been natural to write hamac in English. Why is it written as hammock instead of hamac?

For example, double consonants indicate that the vowel before it is short. The "mm" in "hammock" also does the same thing. But there are exceptions to this. Words like "habit" still pronounce the "a" with the short "a" sound although it is written with a single "b".

I've found an interesting explanation regarding the origin and the adoption of the spelling of hammock. It is suggested that the term hamaca was misapplied by Columbus and his sailors which was intended for the native trees where the hammocks were hung, in the Caribbean (some sources suggest the Bahamas*, some suggest Haiti*, some suggest Fernandina island*) where they discovered it. These sleeping nets were used by the indigenous people called the Taíno and the Arawak. It is added that Bartram and his colleagues adapted the spelling hommock, then it changed to hammock.

Here is the relevant excerpt:

"Hammock, hommock, or hummock?" queried R. M. Harper in 1905; his answer was one of many attempts by botanists to reduce confusion over the classification of southeastern plant communities. Harper (1905) concluded that a hummock is a geographic feature, a rounded knoll, whereas "hammock" and "hommock" are synonyms for dense, hardwood forests that occur in limited areas amid the wet prairies, marshes, and pine forests of the coastal plain.

The etymoloogy of "hammock" and "hommock" is obscure (Oxford English Dictionary 1933). Columbus' sailors learned to use net "hammocks," hanging beds, from Caribbean Indians; perhaps they misapplied the Arawak term, hamacas, intended for the woods in which the sleeping nets were hung. Bartram (1791) and other early expositors of Florida's natural history employed the "hommock" spelling, perhaps in keeping with native pronunciation, but "hammock" became the prevalent form in the writings of the twentieth century.

Here is a relevant sketch I've found from the book Columbus and His First Voyage: A History in Documents (edited by James E. Wadsworth): 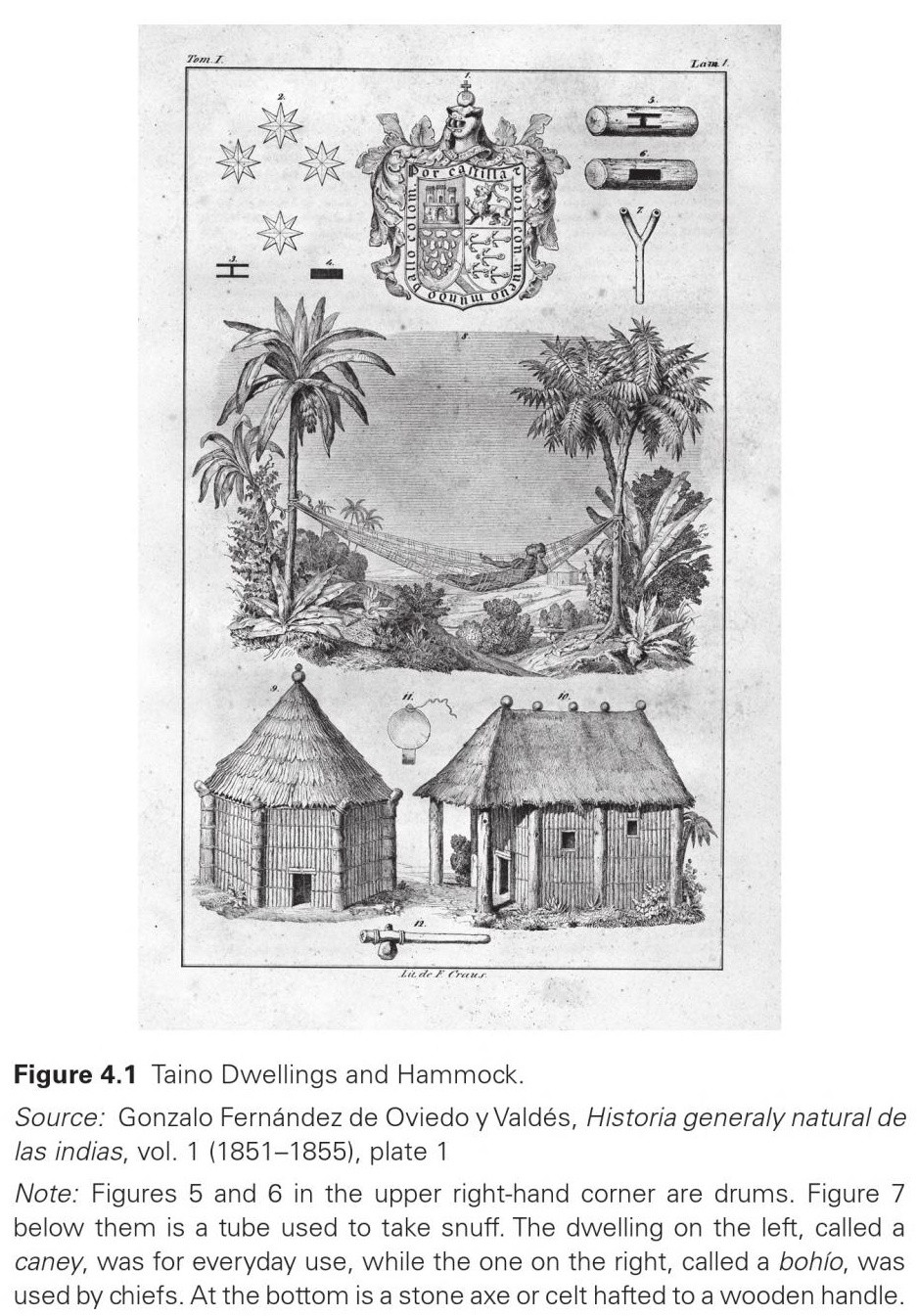 The OED gives the early forms of the spelling of hammock:

So it looks like for the first hundred years or so, hammock was spelled very much like the Spanish hamaca.

However, English spelling was not at all consistent at that time; people spelled words how they sounded. Spelling didn't become fixed until some time in the 1700s, and by then, hammock was an English word—clearly the pronunciation had changed to drop the last syllable, and presumably the stress had changed to the first syllable. Since probably most people had forgotten by then that the word was originally Spanish, the eventual spelling that was settled on had no Spanish influence.

Not the answer you're looking for? Browse other questions tagged etymology orthography loanwords spanish or ask your own question.

4
Why is imperialism not spelled empirialism?
8
Why is "Yosemite" spelled that way?
21
What's the current scholarly opinion on the "minims" explanation for the spelling of "love", "tongue," etc?
1
Why is "jellyfish" spelled with a J?
2
Pronunciation of "of" and "off": Is the similarity of f=/v/, ff=/f/ to Welsh a coincidence?
31
Why is "myrrh" spelled the way it is?
6
Who changed the way vacumn was spelled 40 years ago?
4
Why is “phony” spelled with a ph?