Could you help me to have an essay corrected? [closed]

Ask Question
Asked 8 days ago
Modified 8 days ago
Viewed 12 times
-1
Closed. This question is off-topic. It is not currently accepting answers.

Proofreading questions are off-topic unless a specific source of concern in the text is clearly identified.

The bar chart dipicts the quantity of money people used to buy fast foods represented by hamburgers, fish and chips, and pizza, while the line graph illustrates the absorbability of three ones from 1970 to 1990. In the bar chart, it shows how change in the demand of three income groups is. Firstly, the amount of who consumes hamburgers decreases gradually from high to low income groups. It is about 40 people make a decision to buy hamburgers in high income group, a little over 30 people choose to buy ones in average income group, and about 15 people would like to pay money for hamburger in low income groups. Likewise, this penomenon also occurrs with pizza, it is consumed much by high income groups and least by low income group. In contrast, fish and chips enthralls none of groups, there are a constancy in three groups The line graph shows us that the number of grammes in fast foods people absorb through three popular junk food: hamburgers, fish and chips, along with pizza. In 20 years, the amount of grammes that people comsumed hamburgers were increasing, approximately 400 grammes from 1970 to 1990. There was a steadly rising trend in pizza comsumption, averagely 200 grammes, equivalently a half amount of pizza absorbability. On the contrary, decreasion of the fish and chips’ quantity was perfomed clearly, people declined the number of grammes fish and chips that was consumed from 300 grammes to 200 grammes in the middle of 1980s. However, there was a steadly uptrend in a few years later. 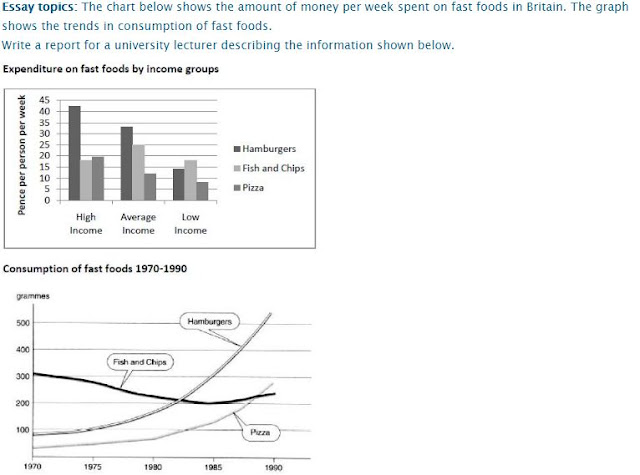 Browse other questions tagged writing ielts or ask your own question.

1
Help with sentence: don't come in
0
Have or Hold Open House
4
Help me check the accuracy of an Ielts Reading question