What is this type of gauge/panel called, which is used to divert energy to different parts of an electrical system?

There is a certain type of read-out that I've seen and heard about in sci-fi settings.

The setting, we'll say "the ship" in this example, has a finite amount of energy throughput at any given time, and energy is being distributed (more or less) evenly throughout the ship - so all power levels are at about 50%.

If I were to suddenly need more power in one sector (we'll say "thrusters"), I could divert energy evenly to the thrusters - bumping thrusters up to 100% and bringing everything else down equivalently. 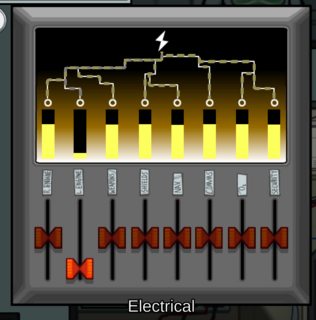 I don't know if it's also a real thing or only fiction (I could imagine something similar being used for power plants or water stations). (Relevant TV Trope)

What is this thing called?

Electrical energy is not used that way; the source of energy unleashes as much energy as is needed by the load within certain limits which are always zero energy and a maximum that depends on the source; the turbine driven generators from a dam have a much higher maximum than a home fuel generator. There is, therefore a problem in distribution networks at peak hours, when the number of loads increases to a limit; the maximum load can be exceeded. There are nowadays devices that operate somewhat along the principle you understand from sci-fi; they are called "load controllers" and they aim at alleviating the problem of peak hour excessive loads; they shed energy automatically and they even turn it off on certain load in your home.

What Is a Load Controller? (ref.)

A load controller is a device that puts a cap on how much electrical usage a home can use at one time. They tie directly into your electrical panel and limit on how much power your home can draw at one time. Let’s say it’s the middle of the summer in Phoenix at 5 pm and your air conditioner is on full blast, your TV is on, you start cooking dinner with an electric oven and you are running hot water, turning on the electric hot water heater. All these loads running at one time would send a signal to the load controller that your power demand is exceeding the rating of the load controller and the load controller would start shedding loads and turning off your appliances and air conditioner to level off your usage. I understand this can immediately be a turn-off for homeowners, and yes, I was taken aback by the thought of it too.

This term is general enough and can be given sligntly different definitions, and in that way you might apply it to sci-fi devices. For instance, you can call "load contrller" the panel with manual controls that is pictured, although that corresponds to no real device.