Why isn't it "I will have been running, lest they have been catching me"?

The phrase in the title is obviously incorrect; however, I'm having difficulties figuring out how it could actually be grammatically constructed. To be clear, I'm aware this is a ridiculous construction, but given that such a tense could theoretically (as far as I'm aware) be combined with the word "lest", I feel that there has to be some technically correct construction.

Here's what I know so far:

"Lest" is an unusual word in English. Wikipedia tells me it's in the subjunctive mood, and requires the use of the following verb in its bare form (the infinitive minus "to"). While this makes sense for basic sentences, I'm not convinced that it's sufficient for constructing sentences where the first clause has a complicated verb tense.

Here are some example sentences I've been thinking about; I'm not sure how many of these are correct, but I've tried to do what seems best:

One difficulty I see is that some sentences with the first clause in the past tense simply don't seem to make sense with the second clause in the infinite. For instance:

To me it seems like 7 makes more sense than 7.1, but I can't grammatically articulate why this would be the case (if it is), beyond the notion that using the bare infinitive in the second sentence confuses the order of events (e.g., running happened in the past, but "lest they should catch me" implies the catching hasn't happened yet). Other example also seem to include temporal context, such as the differences between 4, 10, and 11.

Again, 11.1 seems not to make sense, as 11 implies some degree of uncertainty regarding the speaker's prior actions. E.g.:

"How did you escape?"

"Well, I must have been running, lest they should have caught me."

To wrap back around to the original question, I can imagine almost no scenario in which this would be used, but consider the following:

"By the time you get here, I will have been working on the project for an hour, lest I have nothing to show you."

In this case, the bare infinitive seems natural. Perhaps this means the correct form is indeed, "I will have been running, lest they catch me."

That said, I still have questions about the other examples above, particularly 4 through 11.

If anyone has any insight to offer, I would be very appreciative. Please let me know if there are any clarifications I should add, lest I unduly confuse anyone. :)

Lest now takes only a bare infinitive

Yes, there is a “rule”: in Present-Day English you should ignore the main clause and always use the bare infinitive after lest. That’s what everybody else does even in literary English. So if you don’t follow this rule you’d risk confusing people with something that they would quite likely find ungrammatical.

But it was not always this way: up until around a hundred years or so it was perfectly easy to instead find past subjunctives there when the matrix clause itself was in a past indicative.

I believe the reason this changed from how it used to be done in English is because we stopped perceiving the verb in the subordinate clauses governed by lest as a verb that had both tense (past-vs-present) and mood (indicative versus subjunctive). It was this understanding of tense and mood together which in olden days allowed us to vary the tense while holding the mood constant.

Now instead of being an inflected present subjunctive, it is perceived to be an untensed infinitive with the zero-modal. So you can no longer change its now-nonexistent tense to match the main clause’s tense as was once our habit in the literary English of an earlier age.

So no matter what you do with the poor verb in the first clause, the bare infinitive in the second clause following lest remains inviolate: Don’t mess with it.

This is the same thing that occurs with the so-called mandative subjunctives, and for the same underlying reason.

That's because that bare infinitive is itself a modally marked form in that it already carries the zero modal, if you would. Deviating from that causes it to lose its modal meaning.

That’s why we never touch what was once a present subjunctive.

However, English has changed since then. Now we do not inflect into the past subjunctive for those sorts any longer:

Those two examples are from page 864 of the second volume of F. T. Visser’s monumental An Historical Syntax of the English Language.

Visser has more to say about this new trend in the context of lest:

752―Quite recently writers have begun to use the futural present in clauses opening with the conjunctions lest and on (the) condition that in spite of the fact that the main syntactical unit has the verb in the preterite. More instances are given in the sections on the modally marked form. (§ 878 s.v. lest end paragraph).

And here is what he has to say about it in the section 878 he just referenced:

These final clauses with modally marked form of the verb differ from those discussed in the preceding section in that they express negative intended result. They are introduced by þæt not, that not, þy læs (þe), enaunter, læs þe, læste, leaste, lest.¹)

The idiom is common in Old and Middle English, and remains in rather frequent use in literary Modern English. Thus 1957 Millington-Ward, Peculiarities in English (p. 158) says: “An alternative construction after lest is the subjunctive present in place of both shall and should, e.g. ‘Mary has bought a new mackintosh lest she get wet through again’.”

Instances with the modally zero form in the clause opening with lest are:

Visser has many, many, many more examples of all this on pages 867 and 868. You might be able to read those here. If not, here’s one small bit of it: 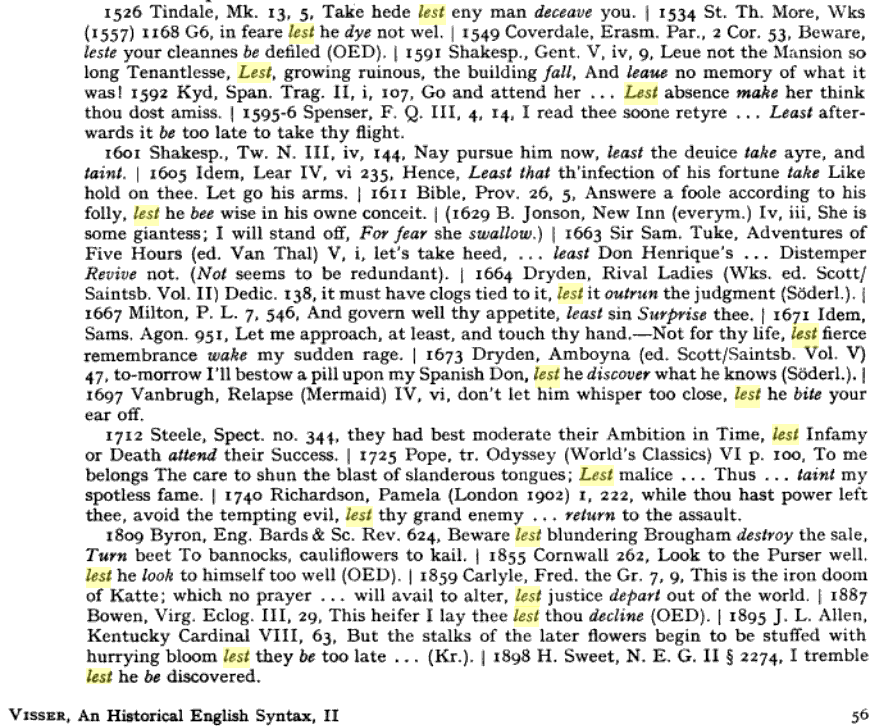 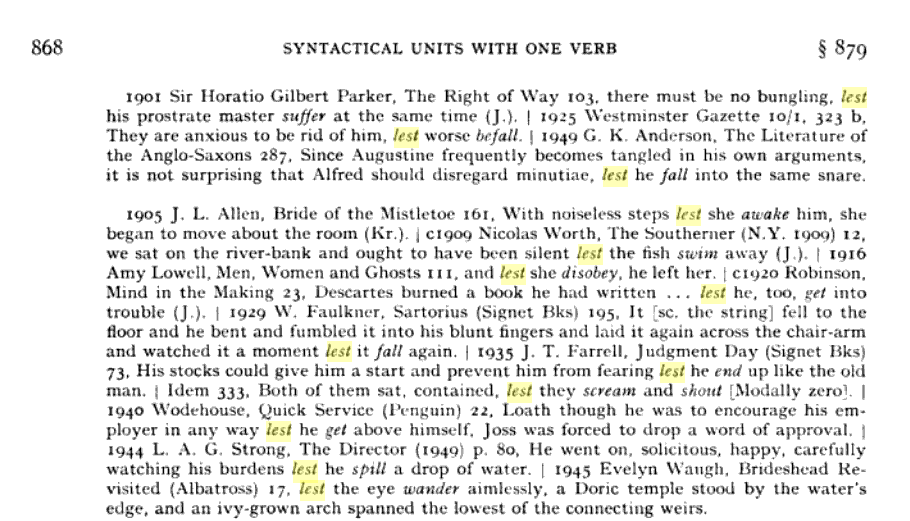 Notice how in those examples with a preterite in the matrix clause, there is still only a present subjunctive — a bare infinitive — in the lest clause.

Not the answer you're looking for? Browse other questions tagged grammar word-usage conjunctions subjunctive-mood or ask your own question.