Use of "tactical" to describe objects

I see the word "tactical" used to describe objects. But I'm not sure what it is supposed to mean. It doesn't obviously flow from the usual dictionary definition of "tactical", which describes plans and actions.

The word seems to be used in a military, police or perhaps general combat context. I'm not sure if it would cover a general fighting context, such as street fighting.

Eg the following news article of 9-June-2022 describes a man as having a "tactical knife": Armed man charged with attempted murder of US Supreme Court Justice Brett Kavanaugh - ABC News

The man, identified as Nicholas Roske from Los Angeles, was carrying a handgun he had purchased to kill Justice Kavanaugh, as well as ammunition, a tactical knife, pepper spray and other items, according to an FBI agent.

So, the word seems often related to military and law enforcement, but not exclusively. What is the essential meaning of this usage of "tactical"?

I agree that the word 'tactical' is often mis and/or over-used, usually to appeal to wannabe warriors like Kyle whatshisname. A search on Amazon.com yields any number and type of equipment that is styled as 'tactical'...

However, the usage of the word used only to apply to equipment that performed a specific offensive/defensive purpose...

The most extreme usage of the term is seen in "tactical nukes". These were designed for the battle front, but are admittedly a bit of overkill in tank warfare. (Expect to see more usage of this term in the near future.)

[By way of comparison, we also see the term 'Strategic'... Many people do not understand, or cannot explain the difference, and really has no bearing on the topic at hand...]

So what does "tactical" mean more recently?

In the last 20-30 years, the term has been extended to body armor, as well as MOLLE vests and other equipment that attaches to these as used in small arms tactics (such as knives). [See the second image below.]

"The good knife fighter thinks on point and blade and shearing-guard simultaneously. The point can also cut; the blade can also stab;"

Knives have many uses, but primarily they are intended for cutting and stabbing. Most people who look at knives with a civilian eye see only the shiny tool that cuts their tomatoes. Professionals such as Chefs think on the cutting edge, and butchers look at the tip, but also the edge.

Some large knives are designed for survival in the field; this may include self-defense.

For example, to the left in the first image below, the heavy ESSE 5S is considered a survival knife. It was designed for RAT SAR, and made to chop its way out of a downed helicopter and also to survive in the field. It's primary purpose is to cut and hack (see: batoning). It includes other features that are non-tactical. It is considered unbreakable, but some old hands may blunt the tip just in case.

The two knives to the right (Gerber StrongArm and Boker Nano L-R) I would consider tactical; notice the spear tip. Its primary purpose is to provide maximum penetration. If you try to chop wood with these they might break. Tactical blades like these are often worn clipped to a Molle vest (see link above, and image below), or even hidden inside a boot.

This is my expert opinion...however, most civilians and even war correspondents may not see the differences, and probably refer to all of these as "tactical".

To make it even more confusing, many manufacturers are combining features , and often describing pretty much anything made for the woods and colored in olive, black or desert tan as 'tactical. 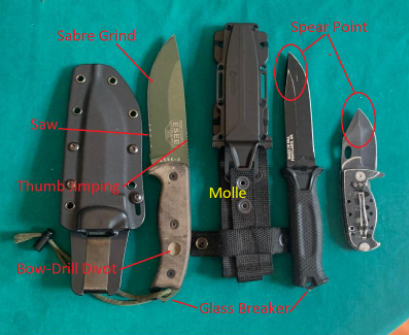 Below is an image of the Gerber clipped to a MOLLE vest. 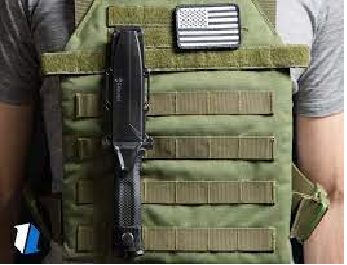 Tactical weapons or forces are those which a military leader can decide for themselves to use in a battle, rather than waiting for a decision by a political leader: They have removed all tactical nuclear missiles that could strike Europe.

From all of these I interpret tactical knife as being a knife designed to severely maim or kill another human being, to distinguish it from other types of knives. Also I understand that a tactical knife is in the style of a knife that might be used in war. (I know nothing about implements of war and would prefer to keep my head in that patch of sand....)

Tactical can also be used ironically. Police in the UK often use a red-painted hand-held battering ram to force entry to properties, commonly called 'the big red key'.

In a recent police TV programme I was watching, an officer referred to the one he was using as having been painted 'tactical black'. Regrettably I can't remember the name of the programme.

1
Would you use the term "looker" to describe a man?
2
Use of “eclectic” when referencing objects in a set
5
Why are objects no longer injured?
2
Use of incumbent to describe job applicant
0
Can the word "appeasing" be use to describe pleasant objects?
1
Objects in mirror are losing meaning
1
"Both" for more than two objects
2
"Tactical Language" (from the Police) is from "Tactical Warfare" (from the Military) etymologically?
1
Do we need to use “All” to describe a set?