Why are typewriter keys referred to as “stops”, especially when compared to organ stops?

I have been listing to an audio book of The Hound of the Baskervilles. In it there is a line which says “…with her fingers over the typewriter stops…”. I am assuming this is referring to the keys of the typewriter, and I’m guessing this is purely antiquated usage.

But I was wondering why they are called “stops”. I have only heard of stops in similar usage when talking about musical organs; where the stops are used to select different effects (I am in not musical, so I am sorry for my poor description). But an organ also has keys, which you press to play the actual note (and pedals which, I have been lead to believe, are also for notes or cords). Stops are also used in a put-in-a-setting-and-leave (or latching), while the keys are a temporary, which would make them more like the keys of a typewriter.

So why are stops used to refer to a typewriter’s keys? They are closer to the use of keys rather than stops of a musical organ.

meaning history historical-change
Share
Improve this question
edited May 11 at 15:06

In typewriting and like machines, the travel of the carriage is determined by margin stops which in general require to be adjustable to vary the width of typing or to determine the width of margin. The object of the present invention is an efficient mechanism whereby these stops may be set employing only one hand of the user of the machine.

There are other stops, such as the shift key stops, which determine the keys producing lower and upper case letters. These are similar to your mentioned organ stops, acting as selectors. 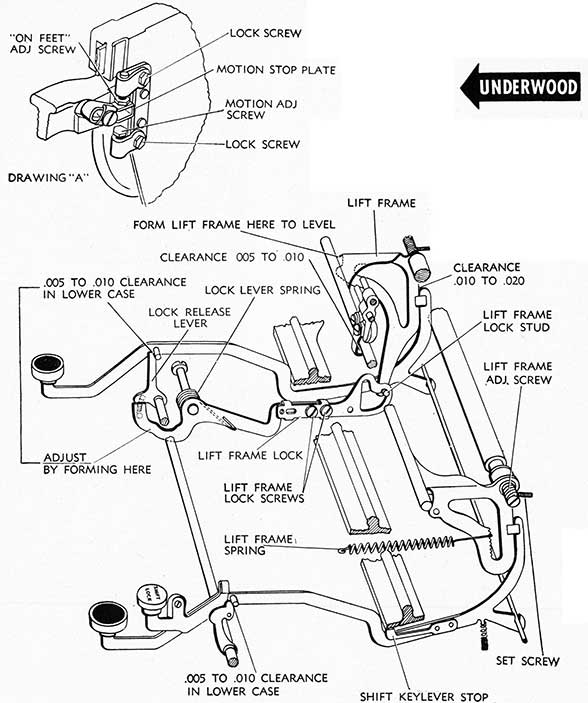 This diagram refers to shift stops and also to key lever. Throughout this maintenance manual there are dozens of references to stops, and to the keys, which are the letter or shift buttons to be pressed, and are not stops.

If her fingers are over the stops, she is perhaps setting the typewriter up for prose of a certain width, or perhaps for lower case or capitals. She is not necessarily typing. This is confirmed by the full quotation:

“What can I tell you about him?” she asked, and her fingers played nervously over the stops of her typewriter.

She is being interrogated and is uneasy, so is not typing, merely fidgeting with her fingers over the stops, rather than typing on the keys.

Another use of the term comes as tab stops, which are useful when typing columnar data. Each press of the 'Tab' key advances the carriage horizontally to the next 'stop' set by the typist.

These of course live on today in word processing applications, as an analog of the mechanical ones.

adding to @Anton's answer (this would have been a comment if I could have included a picture in a comment), I found another picture of a typewriter where the stops are indicated. 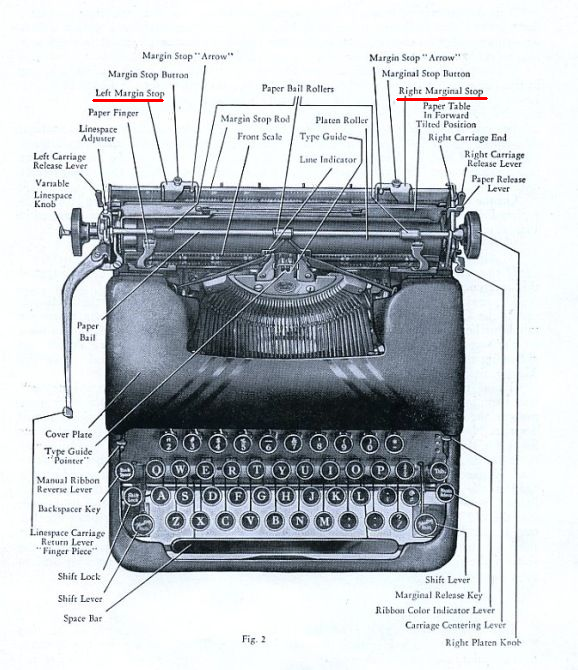 Not the answer you're looking for? Browse other questions tagged meaning history historical-change or ask your own question.

2
When a car stops working, is it "crashed" or "broken"?
2
Why are "put" and "but" different in their pronunciation?
15
Are curly braces ever used in normal text? If not, why were they created?
19
Why doesn't English have a separate word for "head hair"? (head hair vs. body hair)
3
Meaning of nonpareil related to (savory) foodstuffs
0
What is the origin of "steely eyed"?
12
What's the best word for denoting "treat as a single item" in the specific context I describe?
2
When did the UK stop using full stops in abbreviations and acronyms?