Is there a word for the extreme opposite of "irony"

My understanding of irony comes from the movie "Reality Bites":

Frequently people use the term incorrectly, applying it where the actual meaning and the literal meaning are surprisingly similar in unintended ways.

A perfect example of the incorrect usage is the picture below.

It's definitely not irony, so what word can we use? 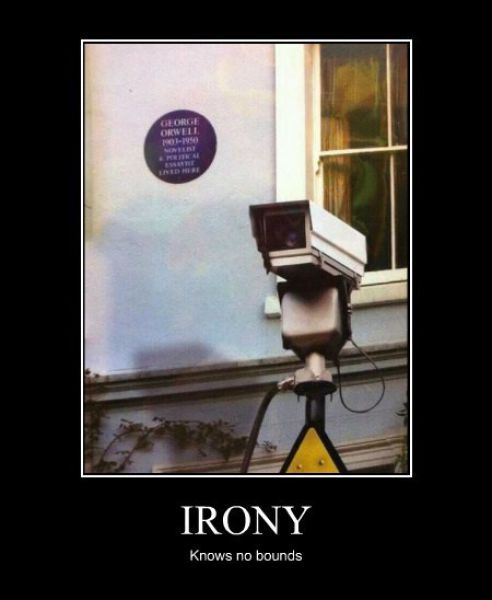 (Just in case the link has broken, it's a picture of a building with a plaque saying "George Orwell Lived Here". Pointing out in front of the building is a security camera.)

apt (becase its what Orwell predicted)

also ironic (because its what Orwell opposed)

Ironically 'Orwellian' means the opposite of what Orwell believed. Which is what happens in 1984 : words meaning their opposites. So 'Orwellian' is Orwellian. How Apt.

That security cameras appeared outside George Orwell's house, who predicted a surveillance state, was very fitting.

I read 1984 in... well, it was before 1984. I don't remember too many details about the book, but I do recall the main character had an odd nook in his house that allowed him to write, out of view of the ubiquitous security cameras placed almost everywhere.

I just looked up irony on-line, and came across these definitions:

How about poetic justice?

(My favourite definition of irony is poetic injustice.)

Accepting the premise of your question, I don't think there's a specific term for when someone attempts to create or point out irony but actually fails to produce an incongruity. If there were, then it would be widely used for the Alanis Morissette song Ironic[*]. The direct opposite of irony in speech is "sincerity", the direct opposite of irony in a situation is "congruity" and synonyms "appropriateness", "harmony". Or "fitting", "apt", "expected", "condign". None of these on its own emphasises a failure to be ironic, but you could say, "that's not ironic, it's totally appropriate".

This example most definitely is irony. Some forms of irony require intent, such as sarcasm[**]. This is a fairly weak situational irony, which does not require any intent to be ironic.

Since it was not deliberate, it is also unintended irony.

Either description would be appropriate here. Call it "situational irony" as an analysis of why it's ironic. Call it "unintended irony" to highlight the haplessness of whoever put the camera up in that position.

The reason it's a fairly weak situational irony is that all we have here is two incongruous elements (honoring Orwell while conducting surveillance), and the idea that the presence of the the plaque should give someone thought not to create that incongruity by placing the camera. A stronger situational irony would be if the plaque somehow caused the camera's presence. It's not usually the case with blue plaques, but imagine that this house has been turned into an Orwell Museum, and the camera is there because of attempts to steal a valuable final manuscript of 1984. Or even stronger, imagine that the government, in homage to Orwell, has chosen to install offices in the building with his plaque on it, and the camera is there to inspect the public as they come and go from the offices ;-)

[*] although one can argue that Ironic must in fact be ironic. Some of the examples given can just about be argued ironic (e.g. "a no smoking sign on your cigarette break": it would be faintly ironic to be granted a formal break for the purposes of smoking by someone who then turns around and plasters no-smoking signs everywhere). However you argue it, though, the song either ironically contains no genuine examples of irony or else ironically fails to achieve even that irony. In short, if you look hard enough for irony you can generally find some.

Not the answer you're looking for? Browse other questions tagged meaning word-choice single-word-requests nouns word-usage or ask your own question.

22
What word means what many people think 'ironic' means?