What is a word or phrase that describes something that looks grand from the outside but in actuality, it is very bad on the inside?

I'm looking for a word/idiom/phrase that describes a situation where the front side has been held up for a show/event to function but the back stage that is holding it is a complete chaos/mess and is on the brink of falling apart.

Specifically, what is a phrase that describes something that looks grand from the outside but in actuality, it is very bad on the inside? For instance, imagine a beautifully decorated Christmas tree. But when I turn the tree, the back side of the tree is all burnt up. It is only putting up a good show on the outside.

This is arguably literally putting on a front.

Putting on a front [Also] putting up a front:

Merriam-Webster has this meaning for "front":

1...b: external and often feigned appearance especially in the face of danger or adversity

... putting up a front as a means of concealing something, [or putting on a front]

And an obviously related (though metonymic, and negative) example:

Office buildings are not renowned for putting on a front. However slick they may appear on the inside, shabby steps, a tatty facade, a worn-away plaque and a plastic buzzer make a commonplace greeting from the street, setting them apart from alluring retail fronts, restaurants, galleries and hotels.

The word facade also has both literal and figurative meanings that match the stated situation:

much in the news lately: "potemkin village"

I can’t resist adding a Scottish idiom to the set of answers;

Something that is all show, with no substance.

An analogy with a woman who dresses to impress with a fur coat but has no underwear, whether for lack of money or promiscuous intent I leave to the imagination of the reader.

: a person inwardly corrupt or wicked but outwardly or professedly virtuous or holy : hypocrite

27 “Woe to you, teachers of the law and Pharisees, you hypocrites! You are like whitewashed tombs, which look beautiful on the outside but on the inside are full of the bones of the dead and everything unclean.

a house of cards

a structure, situation, or institution that is insubstantial, shaky, or in constant danger of collapse

a false, superficial, or artificial appearance or effect

Its original meaning is the face of a building, but you will probably observe it used more often in the above sense.

Others that come to mind include:

You might also consider adapting the logic of "house of cards" to your own juxtaposition of something grand built in a plain or unsuitable medium. Example:

Another approach would be to describe something as lacking substance:

A couple of phrases that describe the attempt of making something bad appear good on surface include "putting lipstick on a pig" and "polishing a turd". These would usually apply best when the attempt has failed, otherwise no one would be aware of the poor quality below the surface. They typically describe a futile attempt to make something awful appear good from the outside - even in their most attractive possible forms with lipstick or a polish, you're still looking at a pig or a turd. The Christmas tree example as given doesn't fit exactly since it really does look beautiful from one side - a more fitting case of "lipstick on a pig" would be a completely dead tree with falling needles that's decorated with beautiful ornaments.

The word that comes to mind is pinchbeck:

a gold plated piece of feces.

Probably not something you will find in a dictionary or other 'official' source but a casual search returned multiple hits.

Gilded is probably the most succinct (short) version of what you're looking for.

One example is the Gilded Age of American History, which directly led to the Roaring (19)20s, where corruption was rampant but everybody was having unsustainable fun before the resultant market crash that made everybody impoverished and starve.

Another example is gilded metal (where the Gilded in Gilded Age comes from), where a fragile (in this context, fragile meaning easily corroded by oxygen) metal gets coated with something stronger (in this context, stronger meaning hard to corrode).

Colloquially speaking, Poser is a person or company/corporation that says they will commit one very good action but doesn't actually commit that very good action (similar to the definition of hypocrite, but specifically with reference to good/kind/nice actions instead of the implied ambiguous morality of hypocrite)

Specifically, what is a phrase that describes something that looks grand from the outside but in actuality, it is very bad on the inside?

looks can be deceiving/deceptive (idiom)

The restaurant doesn't look very appealing, but looks can be deceiving/deceptive. m-w

As the example shows, this idiom can be used both ways. (I'm not sure about giving that restaurant a try, though.)

An appropriate saying would be don't judge a book by its cover.

The English idiom "don't judge a book by its cover" is a metaphorical phrase that means one should not judge the worth or value of something by its outward appearance alone. Wikipedia

Superficial presenting only an appearance without substance or significance

(All fur coat and no knickers)

“Aw fur coat an nae knickers” is a popular jibe levelled by Glaswegians in the west at those in Edinburgh in the east. The insinuation is that while Edinburgh residents appear cultured, dignified and steeped in class, this is purely superficial and that underneath the facade they are no classier than their local rivals…Also implied in the insult is a reference to the dress worn by the high-class prostitutes that once plied their trade on the Capital’s Danube Street under the employment of famous “Madam” Dora Noyce.

@Anton has provided an abbreviated version of this very British (primarily Scottish) saying, with “drawers” replacing “knickers”, although the latter was subsequently added as an alternative. However there is ample evidence that the delightfully alliterative “knickers” version (with or without the “aw” and “an”) is the most common — I would say authentic — version, and “drawers” is the very rare alternative. I therefore feel obliged to post a separate answer, with supporting evidence. (I’m a scientist — I would, wouldn’t I.)

First, The Scotsman is a Scottish national newspaper based in Edinburgh, so the quotation and explanation can be regarded as having some authority.

Second, an internet search for “fur coat, no drawers” brings up a top hit in Word Histories with “drawers” only as an alternative, but a page of other hits with “no knickers” — certainly no drawers. (Try it yourself.) 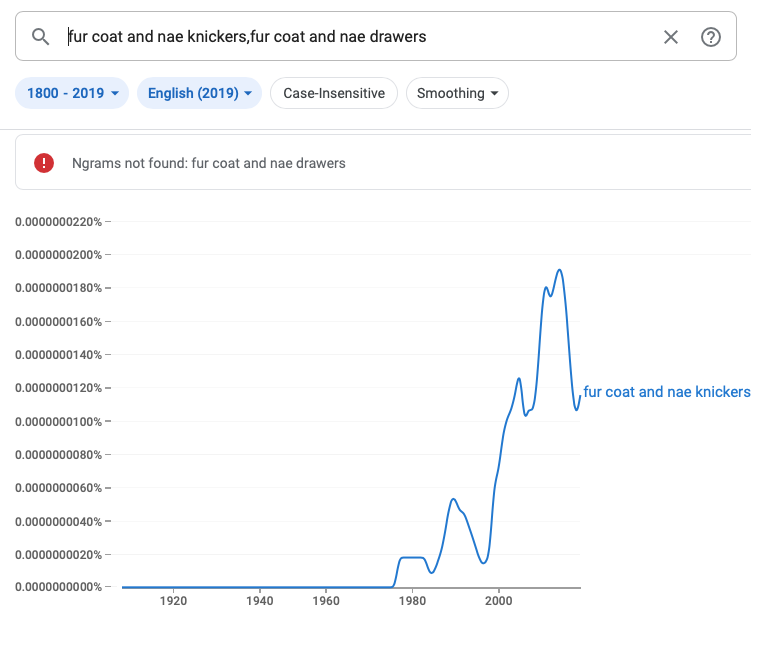 It is of some interest that books retrieved by the ngram search that include this expression date from no earlier than 1975, although the Word Histories article has a quotation from 1966. By this time the pre-war term “drawers” had completely gone out of use in Britain — my wife laughed when she heard the suggestion. (Oh, and we have lived in Glasgow for half a century.)

In corporations, there is the concept of watermelon diagrams (or data).

Data that is green (OK) on the outside (usually for showing to management), but when you cut in it is bright red.

All that glitters is not gold could apply.

not everything that looks precious or true turns out to be so.

"Putting on a show"

"Gilding the Lily" <- comments suggest this is questionable.

You could quote Hamlet and say... Something is rotten in the state of Denmark.

46
Is there a similar English phrase for this Tamil proverb - "Lavish outside home yet starving inside of it"?
17
Word for the “fakeness” of extravagant places
4
Looking for a word for concealment of faults
4
Word or phrase for fake appearance or posturing