Is the phrase 'according to me' correct?

Is the saying "According to me" correct?

I believe it's incorrect, and that "In my opinion" is better.

It's certainly grammatical. Whether and where you use it is entirely a matter of personal choice.

The use according to me is correct, but it doesn't have the same meaning as in my opinion.

The form according to nn is used when nn is some kind of authority, so if you are using it on yourself, you are also implying that you are an authority in the field.

The formation is grammatically fine, as evident in four centuries of usage. The more operative question should be whether you want to sound like you're citing yourself as an authority.

First, the general usage is attested in the Oxford English Dictionary, "according, adj. and adv."

Lots of people and items can state or formulate something, including oneself. The reflexive usage with "me" begins to appear soon after "according to..." emerges in theological discourse.

The first instance of according to me that I can find is in a seventeenth century theological argument, Anti-pædobaptism, or, The third part by John Tombes (1657). Tombes uses the appeal "according to me" to sum up arguments that someone else has made against Tombes:

But saith M. Bl. if the child of the promise were all one with to be elect, then (according to me) all the Jews according to the flesh were elect persons; they had the promises, yea those that were actors in Christs death Acts 2.39. which he must needs yield to be an absurdity.

To which I reply, I do not conceive how this is true according to me, that if children of the promise be all elect, all the Jews according to the flesh were elect persons.

So Tombes is saying that the other author has claimed that Tombes stated or implied a consequential point; Tombes insists that he does not see how that was "true according to me," that is, how he stated or suggested that point.

John Bramhall (1658) uses similar phrasing in Schisme garded and beaten back upon the right owners to sum up how someone else has construed Bramhall's argument:

His fifth Objection is, that according to me the Lawes made by Henry the eighth, did no more then the former Lawes. Where did I say so?

In the 18th century, "according to me" begins to appear in a kind of self-summary, or a way to summarize what oneself has argued or would argue. This is in The Archbishop of Cambray's Pastoral Letter Concerning the Love of God (1715), p. 8, as accessed on Eighteenth Century Collections Online (paywalled).

I have said also, That His Will of Permission is never our Rule; and, consequently, that our Reprobation, which can never be founded, except on the permissive Will of GOD, because of our final Impenitence, according to me, can never be the Rule of any of our Wills.

The Archbishop of Cambray uses "according to me" several times where he is summarizing his own points for his reader, and without immediate reference to another writer.

There is no grammatical restriction on putting a first-person pronoun as the object of according to.

However, citing oneself as an authority may be rhetorically unpersuasive, especially in academic and academic-adjacent settings. For instance, if I had answered the "Early History" section by saying, "According to me ..." it wouldn't do anything for me. At best, it would be redundant, as anything I say is according to me. At worst, if I had no other sources, it would appear that I was relying on my own standing in the absence of other research. Since "according to" is a common signal phrase for citation, academic readers will expect a source that isn't me.

Meanwhile, the influx of recent books that include "According to me" in the title may qualify as a cliche (Google Books):

Perhaps the authors are attracted to the greater authority in "According to Me." In any case, though a title fad is underway, the usage has not increased that much generally, according to Google Ngram; similarly, both usages are insignificant compared to according to generally or "in my opinion". The Corpus of Historical American English didn't have enough instances to make a fair multi-decade comparison (3 in the 1870s, 1 in most of the decades of the 20th century, 3 in the 2000s).

Thus, "according to me" may be more or less appropriate depending on context, but it is grammatically correct.

According to Longman, you cannot say "according to me" as it means "as shown by something or stated by someone or reported by".

if you use according to as a reporting device, "according to me" will be incorrect since you are the one who is reporting. In this usage, according to is mostly used to attribute statements / thoughts to other sources/people. Below is an excerpt from "The New Fowler's Modern English Usage":

According to, used as a complex preposition, means

1) in a manner that is consistent with something

Everything went according to plan.

2) as stated by someone or in something

2.A) as a factual statement

According to our records your current account is in credit.

2.B) with an element of uncertainty or disbelief

According to you, you were at school this morning but according to the teacher you were not.

... salary according to experience.

Arrange the blocks according to size and colour.

Based on the Frequency of Usage

Some data, courtesy of Google, make of it what you will.

The Ngram chart below shows the frequency of “according to” with the following pronouns: “his”, “our”, “him”, “her”, and “me” during the period 1900 to 2004. Here, we can see that the phrase "according to his" has always dominated the other options; however, in the 1960s it started falling steadily in usage until 2000 when its popularity started to rise slightly. In dramatic contrast, the phrase “according to me” appears to be a steady flatline from 1900 until 2004, barely rising above 0.000000%. 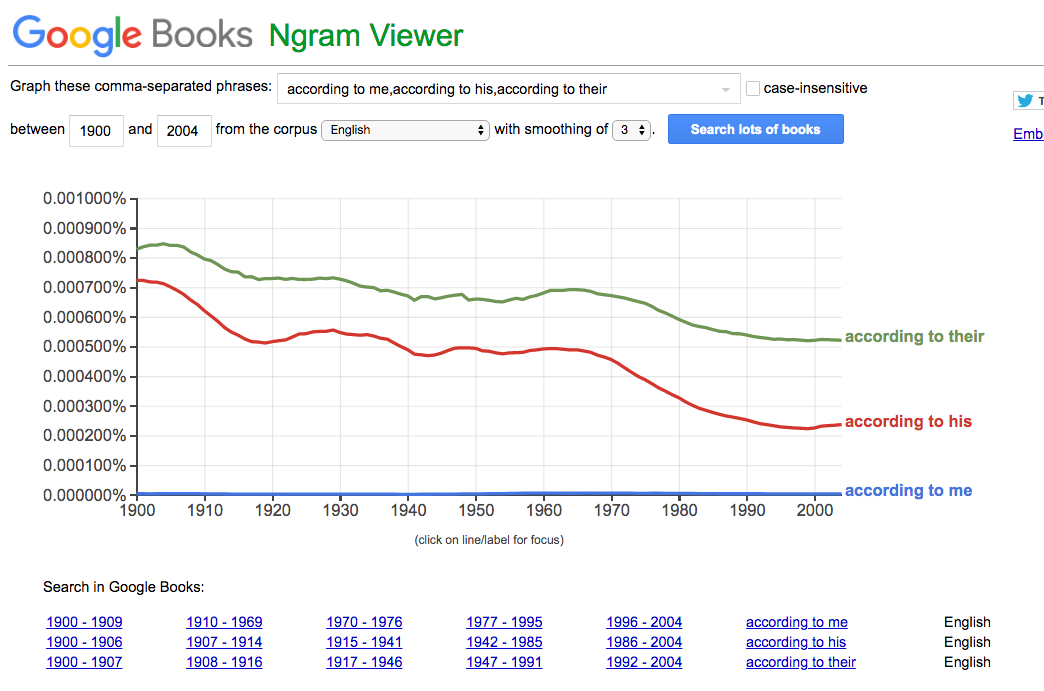 Moving away from Google Ngram to Google Scholar, an academic search engine which searches through scholarly books, articles, abstracts and documents. In the screenshot below, we see that visitors type “according to” with the following determiners and expressions in the following order of popularity: 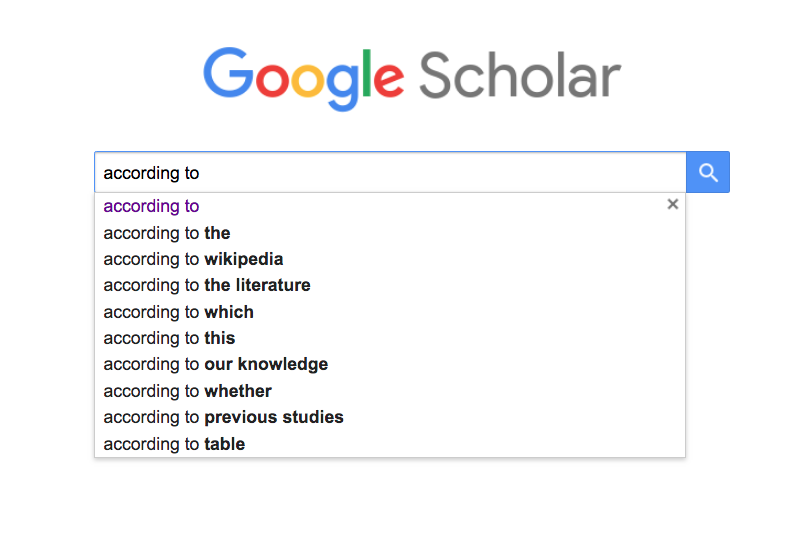 What do the experts say?

As reported by Cambridge Dictionary,

According to means ‘as reported by’ or ‘as stated by’ and refers to an opinion which is not the speaker’s opinion. According to usually occurs in front position. It is commonly followed by a noun phrase and sometimes by a clause:

According to the instructions, you’ll need to buy some glue.

The government, according to a poll taken last month, may lose the next election.

We often use according to in formal contexts to refer to official evidence such as statistics or reports:

According to a recent report by the Department of Health, most people still do not take enough exercise.

Typical error
We only use according to when we refer to an opinion from someone else or somewhere else. When we talk about our opinion, we use phrases such as ‘in my opinion’ or ‘in our view’:

In my opinion, they were not very polite.

Not: According to me …

Alternatives to “according to me”

In formal speech or written exams, it is advisable to avoid “according to me”, as it suggests that you consider yourself an authority of the topic being discussed. It is, therefore, better to use an alternative phrase such as

If, on the other hand, you are an expert in the field and/or you are writing a scholarly paper, use the following

In my experience I have only seen people from Tamil Nadu, India use this expression "according to me". It sounds funny but fairly highly used in that part of the world in regular usage.

My first reaction was that it sounds odd.

I did have a moment of doubt because in French they say it ("d'après moi") and in Flemish as well ("Volgens mij").

But as mentioned by the people above, "In my opinion", "I think that", "If you ask me" sounds better.

Some grammar books say that according to my opinion is wrong. Buy say thataccording to the author is correct

Many dictionaries say that the usage is awkward or weird though it is grammatical.

The usage is found mostly in India. I think it is not good usage.

I will not use the usage hereafter.

It's grammatically correct, but a lot of people don't like using it as it sounds a bit weird.

Edit: As seen from the following Google Books, it is used extremely rarely (especially recently):

Not the answer you're looking for? Browse other questions tagged word-choice grammaticality usage or ask your own question.